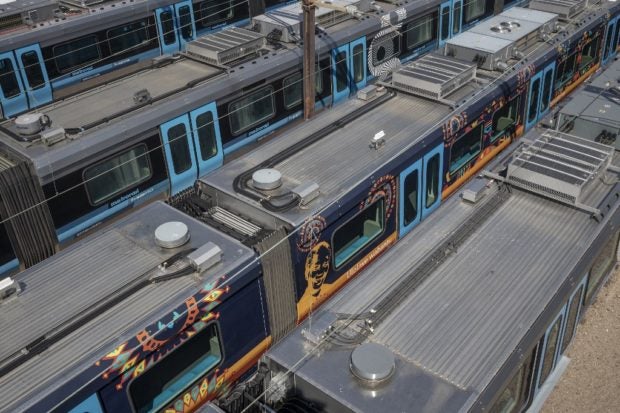 A train with a commemorative livery showing the face of former South African President Nelson Mandela is seen among newly constructed trains at the PRASA Wolmerton depot near Pretoria, on March 10, 2021. (Photo by Michele Spatari / AFP)

Johannesburg, South Africa — South Africa’s railway infrastructure has been ravaged during coronavirus lockdown, with thieves plundering anything from cables and handrails to bricks and doors.

In the strictest months of confinement last year, looters went to work on unguarded stations and railway infrastructure, making off with almost anything that could be ripped off or cut down and carted off.

Kliptown, a train station in the famous Johannesburg township of Soweto, lies in ruins, stripped bare of its windows and doors and even its roof.

Signaling and electric cables have been yanked out. Staircase railings have been sawn off. Even the perimeter walls have not been spared, with bricks bashed out and hauled away.

“It’s like an atomic bomb was thrown here… It’s like a tsunami,” lamented a community leader, George Mohlala, 37, pointing to the ruined station.

When President Cyril Ramaphosa placed the country under a strict lockdown, railway stations were left unguarded.

More than 80 percent of the country’s train stations have been vandalized, the state-owned rail operator Passenger Rail Agency of South Africa (PRASA) said.

What’s left of the ticketing office in the Kliptown station are shards of glass — the only evidence of turnstiles that once functioned here.

“It’s like a war zone,” said a despondent Mohlala, navigating around holes dug on the platform to extract underground cables.

“The only thing that is left here is heavy (items) that people cannot lift,” he said, pointing to rusty rail tracks, flanked by weeds and grass.

Some locals are even illegally tapping into electricity from the disused stations to their homes. 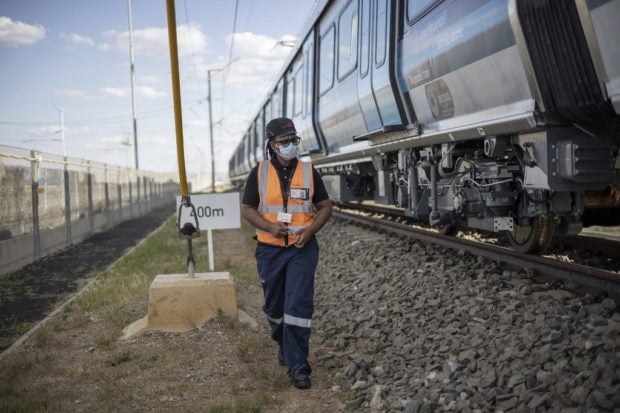 A driver inspects a newly constructed train during testing at the Gibela Rail Transport Consortium factory near Springs, on March 8, 2021. – Since 2018, the factory has produced more than 50 complete train sets, of which 16 have been dispatched to Cape Town and Durban. (Photo by Michele Spatari / AFP)

Ironically, the vandalism occurred as the government embarked on an ambitious multi-billion-dollar plan to modernize its urban commuter rail transport network.

Around 50 kilometers (30 miles) east of Johannesburg in the small town of Nigel is a state-of-the-art factory that is manufacturing “people’s trains,” as they are dubbed.

Named Gibela (“Get on board” in the Zulu language), it is run by a consortium of French giant Alstom and South Africa’s Ubumbano Rail and has a contract to build a fleet of 3,600 coaches or 600 complete trains — including wagons and engines — by the turn of the decade.

Since 2018, the factory has produced more than 50 complete trains, of which 16 have been dispatched to Cape Town and Durban.

The rest are safely locked away at a storage depot in Pretoria awaiting deployment.

The 51-billon-rand ($3-billion, 2.8-billion-euro) contract is one of the largest in post-apartheid South Africa.

After overcoming teething troubles and falling behind schedule, Gibela is ramping up production.

“We will have to deliver 62 trains per year until the end of the project,” Gibela factory manager Loic Le Gorrec told AFP.

Alstom’s Southern Africa regional general manager Bernard Peille, said: “Having this target of producing two cars per day in two years… (Gibela) should be basically one of the fastest production factories in the world, not only in Africa.”

Transport Minister Fikile Mbalula blamed the looting on “collapse of security” but vowed to crack down on the problem with the help of a scheme to recruit locals as guards backed by police.

“We are fixing the infrastructure that is vandalized,” he told AFP.

“Protecting these assets is a collective responsibility we must all shoulder.” 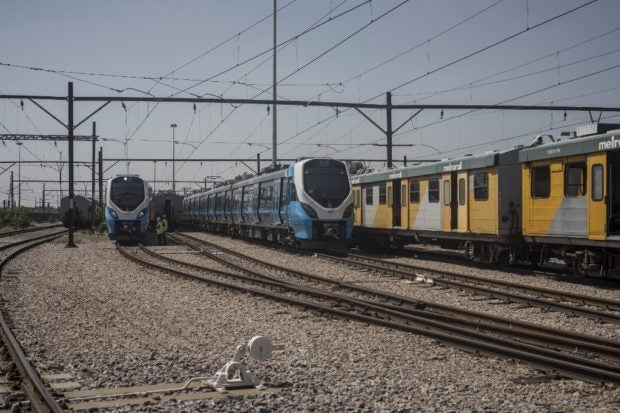 Newly constructed trains are seen among old ones at the PRASA Wolmerton depot near Pretoria, on March 10, 2021. (Photo by Michele Spatari / AFP)

The pillaging of rail infrastructure is not new in South Africa with thieves targeting copper cables in the past.

Once stuck for several hours on a train stalled by cable theft, Ramaphosa has described the plunder of rail assets as “the worst form of economic crime”.

“We obviously don’t make trains to be antiques, we don’t make them to be in storage or in museums,” Gibela CEO Hector Danisa told AFP.

“So when you see infrastructure that is unable to efficiently use our trains, it’s worrying,” he said. “It’s abnormal, people stripping an entire station… it’s painful”.

The damage runs into billions of rands, said PRASA board chairman Leonard Mamatlakane, admitting it was a mistake to have left the stations unguarded.

“We should have done something better to prevent that, but we could not see it coming,” he told AFP.

Commuters have, meanwhile, bear the brunt.

Food vendor Zodwa Mangena, 40, last took a train over a year ago.

“It’s messed up,” she said referring to the Wonderboom station in Pretoria. “Now we use taxis (privately-run mini-buses) and they are expensive,” she said.