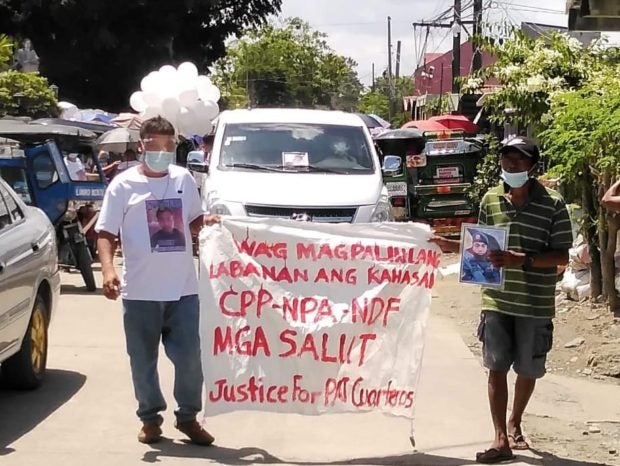 TUGUEGARAO CITY—Relatives and friends hailed as a hero the policeman from this city, who was killed in a clash with New People’s Army (NPA) guerrillas in Camarines Norte last March 19.

Four others were killed and two were wounded when ambushed by NPA guerrillas in the town of Labo, Camarines Norte.

Cuarteros’ widow, Jaybee, denounced the guerrillas as she pleaded for swift justice.

“Those who killed my husband, I do not know your purpose,” Jaybee said.

“Why do you have to kill? For your supporters, your conscience will haunt you. You have children and families. You should think about the good of all. If there is another way, do not kill,” she said in Filipino.

The Cagayan-born policeman was assigned to the first platoon of the 2nd Police Mobile Force Company at the time of his death.

He was on patrol when he and his police colleagues clashed with the guerrillas past 9 a.m.

Read Next
ECQ 2021: Been there, done that but commuters still suffer
EDITORS' PICK
As vaccine injection rate rises in PH, questions linger on how long it would take to reach herd immunity
Palace doesn’t see tension in WPS, only Duterte haters incite it
A Spanish Celebracion with Crimson Mactan’s ‘Enye at Home’
Retired military, police execs call for unity vs China aggression
Re-imagining EdTech and the classroom in a post-pandemic era
CopperMask Philippines shows support for Miss Universe Philippines 2020 Rabiya Mateo
MOST READ
Mexico wins Miss Universe title but Myanmar steals show
‘Check your facts:’ Trillanes disputes Enrile claims on 2012 back-channel talks with China
Pangilinan on China’s threat if PH digs oil in WPS: Why should we be scared?
Retired military, police execs call for unity vs China aggression
Don't miss out on the latest news and information.