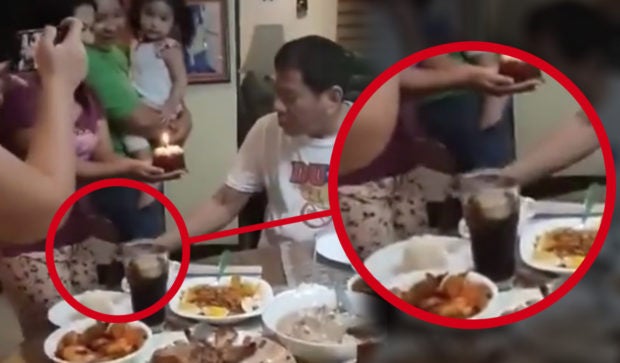 MANILA, Philippines — Malacañang on Monday defended President Rodrigo Duterte from those who called him out over a viral video showing him trying to touch his house helper who brought him a cake on his birthday.

Presidential spokesperson Harry Roque said in an online briefing that the President’s action had no malice as it was just a display of Duterte’s sense of humor.

In a video circulating on social media, the President can be seen blowing a candle on top of a cup of rice. As a woman approached him seconds later while holding a small cake, Duterte seemingly attempted to touch her lower body, prompting her to quickly move away from the President’s hand.

(Now what you’re saying about the supposed inappropriate touching, she has been their house helper for a long time. You know that the President is a joker but there is no malice in that because Ma’am Honeylet was there.)

(If there is someone who should complain, it is their house helper. That’s it.)

Asked if it was wrong to call out Duterte over his action, Roque said there is nothing the President can do about those who keep on criticizing him when he was only joking around on his birthday.

(The President has no control over those criticizing him, that’s expected. If you ask whether it was wrong or right, the context is that the President has a close relationship with them, he was only joking around on his birthday so there’s nothing wrong with that.)

(But regardless of the truth, the President’s critics will not stop. That’s just it. It’s not bad, it’s not wrong. That’s expected of them.)

The President has received criticisms for his sexist and misogynistic pronouncements such as shooting the vagina of female rebels and rape jokes.

He also previously admitted “touching” a maid in her private part while she was asleep when he was young.

In 2018, Duterte kissed an overseas Filipino worker in South Korea during a public event.

Palace: No Duterte pretension of being poor in simple birthday celebration