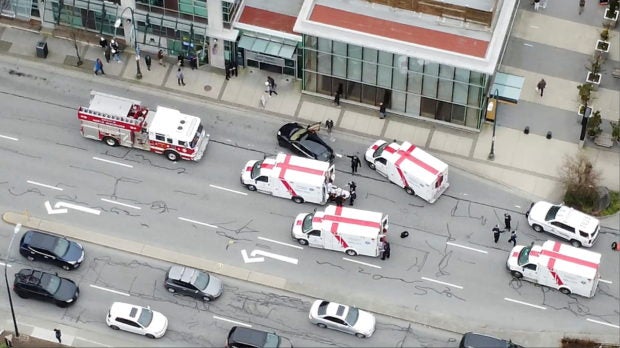 Ambulances and emergency personnel are seen on a road at Lynn Valley Plaza after a stabbing at a public library in a suburb in Vancouver, Canada March 27, 2021, in this still image from drone video obtained via social media. (ANDREW COCKING FROM SR MEDIA CANADA via REUTERS)

VANCOUVER, Canada  – A 28-year-old suspect was charged with murder Sunday, a day after allegedly stabbing and killing one woman and wounding six others at a library in the Canadian city of Vancouver.

Yannick Bandaogo, who was arrested at the scene, is accused of carrying out the attack at the Lynn Valley library in which one woman in her late 20s died.

“His background, history in BC (British Columbia) and relationship to the victims, if any, is still being determined,” police said in a statement, adding he had undergone surgery for self-inflicted wounds.

The stabbings took place in the afternoon in a quiet, upscale neighborhood of the Pacific coast city, causing national shock in Canada.

The CTV network broadcast a video apparently showing the arrest of the suspect, who appeared to stab himself in the leg before collapsing and being detained by several police officers.

“We share the community’s grief and outrage,” said Superintendent Ghalib Bhayani of the North Vancouver police. “Lynn Valley Library is a peaceful place. A place where our community comes to learn and our children come to explore.”