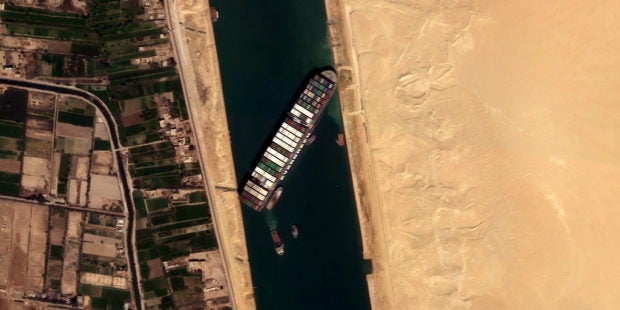 Ever Given container ship is seen in Suez Canal in this satellite image taken by Satellogic?s NewSat-16 on March 25, 2021. Satellogic/Handout via REUTERS

SUEZ, Egypt — Efforts to dislodge a giant container ship blocking the Suez Canal have allowed its stern and rudder to move, but it remains unclear when the vessel will be refloated, the head of the canal authority said on Saturday.

The 400 meter (430 yard) long Ever Given became wedged diagonally across a southern section of the canal amid high winds early on Tuesday, blocking one of the world’s busiest waterways.

A combination of dredging material from around the ship and pulling and pushing the vessel with tugboats made minor progress in dislodging the ship on Saturday, two SCA sources said. One source said there had been some movement at the bow of the ship.

Suez Canal Authority (SCA) Chairman Osama Rabie told local TV that water had started running underneath the ship. “We expect that at any time the ship could slide and move from the spot it is in,” he told a press conference earlier.

About 15% of world shipping traffic transits the canal and hundreds of vessels are waiting to pass once the blockage has been cleared.

Rabie said he hoped it would not be necessary to remove some of the 18,300 containers on board to lighten the ship’s load, but strong tides and winds were complicating efforts to free it.

“The ship’s stern began (on Friday) to move towards Suez, and that was a positive sign until 11 p.m. (2100 GMT) at night, but the tide fell significantly and we stopped,” Rabie told journalists in Suez.

Dredgers removed some 20,000 tons of sand from around its bow by Friday. A Dutch firm working to free the vessel said it could be freed by the start of next week if heavier tugboats, dredging and a high tide succeed in dislodging it.

Tugging attempts restarted on Saturday afternoon and further efforts were planned for Sunday, SCA sources said, though they added more sand may need to be removed from around the ship to free it.

A shipping agent in Port Said said the SCA had notified agencies to prepare for the possible entry of new ships into the canal, while a shipping source said the SCA had outlined a plan for the rapid transit of 133 vessels once the Ever Given was freed.

The head of Boskalis, parent company of Dutch firm Smit Salvage which has been brought in to help the SCA, said heavy tugboats with a combined capacity of 400 tons would arrive sometime this weekend.

“We aim to get it done after the weekend, but everything will have to work out exactly right for that,” Boskalis Chief Executive Peter Berdowski told Dutch TV program Nieuwsuur late on Friday.

If the blockage drags on, shippers may decide to reroute their cargoes around the Cape of Good Hope, adding about two weeks to journeys and extra fuel costs. Rabie said the ships that are waiting were free to reroute, but none had yet done so.

He said 321 vessels were waiting to enter or continue their transit through the canal. Those included dozens of container ships, bulk carriers and liquefied natural gas (LNG) or liquefied petroleum gas (LPG) vessels, according to a shipping source.

Fourteen tugs have so far been involved in efforts to refloat the Ever Given, although Boskalis and Smit Salvage have warned that using too much force to tug the ship could damage it.

Berdowski said a land crane could lighten the Ever Given’s load by removing containers, though experts have warned that such a process could be complex and lengthy.

“If we don’t succeed in getting it loose next week, we will have to remove some 600 containers from the bow to reduce the weight,” he said. “That will set us back days at least, because where to leave all those containers will be quite a puzzle.”