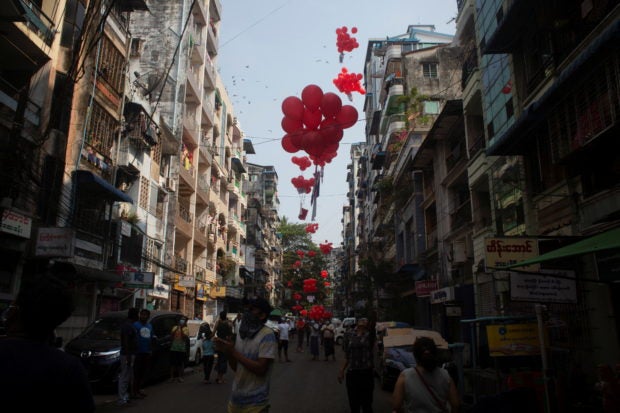 Protesters release red balloons during a protest against the military coup in Yangon, Myanmar, March 24, 2021. REUTERS/Stringer

Four people were killed in the town of Taunggyi in central Myanmar in the shooting, the Myanmar Now news portal said.

Thousands of people held street protests in the commercial capital Yangon, the central city of Monywa, and several other towns, according to witnesses and social media posts.

“Are we united? Yes, we are,” protesters shouted in Monywa. “The revolution must prevail.”

Nant Khi Phyu Aye, one of those on the street, said many of the protesters were youngsters. “They want to protest every day without skipping one day,” she told Reuters.

Police fired at a street demonstration in the city of Mawlamyine and arrested 20 people, the Hinthar Media Corp said. At least two people were injured, it said.

Other media outlets reported at least five people sustained bullet wounds when security forces opened fire on protests in other towns. Reuters could not independently verify the reports.

At least 286 people have been killed since the February 1 coup in the crackdown on protests, according to the Assistance Association for Political Prisoners (AAPP) activist group.

In a sign of growing international pressure, the United States is planning to impose sanctions on two conglomerates controlled by Myanmar’s military, sources familiar with the matter told Reuters.

The move is expected as early as Thursday.

While the scale of the protests had been dropping in recent days, activists had called for big demonstrations on Thursday.

In Thanlyin on the outskirts of Yangon, protesters held up placards reading: “We don’t accept military coup”, while medical staff wearing white coats held a dawn march in the second city of Mandalay.

Five more people were wounded overnight in Mandalay, Myanmar Now reported. A 16-year-old man died after being shot in the back, it said.

The funeral of a seven-year-old girl killed on Tuesday, the youngest known victim of the crackdown, took place on Wednesday in Mandalay.

A spokesman for the military, which said on Tuesday 164 protesters had been killed, did not answer calls seeking comment.

The junta on Wednesday freed hundreds of people arrested in its crackdown on protests against the overthrow of the elected government of Aung Sang Suu Kyi.

There was no word from authorities on how many prisoners were released, but AAPP said 628 were freed on Wednesday out of more than 2,900 arrested since the coup. About 1,000 people had been freed in all, it said.

Among those released was Polish photojournalist Robert Bociaga, who was arrested in Taunggyi two weeks ago. He said in a message that he was leaving Myanmar on Thursday.

The junta has faced international condemnation for the coup that halted Myanmar’s slow transition to democracy and for its deadly suppression of dissent.

It has tried to justify the takeover by saying a Nov. 8 election won by Suu Kyi’s National League for Democracy (NLD) was fraudulent – an accusation the electoral commission has rejected. Military leaders have promised a new election but have not set a date and have declared a state of emergency.

Suu Kyi, who won the Nobel Peace Prize in 1991 for her campaign to bring democratic civilian rule to Myanmar, has been in detention since the coup and faces charges that her lawyer says have been cooked up to discredit her.

The European Union and the United States imposed sanctions on Monday against individuals involved in the coup and the repression of the demonstrators.

Singapore’s Foreign Minister Vivian Balakrishnan is due to meet his Indonesian counterpart in Jakarta on Thursday that is expected to include discussions on Myanmar.

Malaysia and Indonesia are seeking an urgent meeting of Southeast Asia’s ASEAN regional grouping, of which Myanmar is a member, to discuss the crisis.

Read Next
Probe ordered of De Oro city employees who cut vaccine line ‘under the guise of substitution’
EDITORS' PICK
Tired of your Wi-Fi signal problems at home? Here’s a solution!
Must-know scams to avoid when buying cars
Average new COVID-19 cases daily in NCR down 30%
POVA x Mobile Legends Bang Bang: A partnership that’s built to win
Patients evacuated as fire hits PGH
Concepcion: Consider vaccine passes once herd immunity reached in NCR Plus
MOST READ
Patients evacuated as fire hits PGH
Mikey Garcia ‘not getting hopes up’ as Pacquiao fight yet finalized
Go pushes bill seeking creation of Center for Disease Control and Prevention
Dave Bautista on his Filipino grandfather, living with regret and being around superheroes and zombies
Don't miss out on the latest news and information.