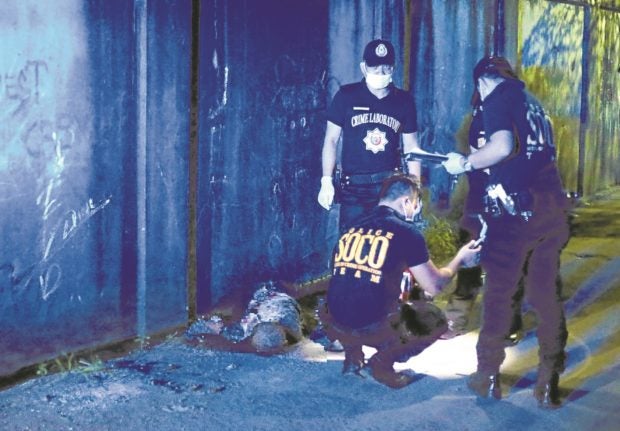 KILL, KILL, KILL The Commission on Human Rights says its initial findings from an investigation of thousands of extrajudicial killings in the antidrug campaign show that the police intended to kill drug suspects. Its report, which will be released in about a month, is based on testimonies of relatives of the victims, as well as police and autopsy reports. —INQUIRER FILE PHOTO

MANILA, Philippines — The Philippine National Police used “excess, unreasonable” force and had the “intent to kill” suspects during drug-related operations, the Commission on Human Rights (CHR) found after looking into thousands of drug-related killings in the past four years of President Duterte’s antinarcotics campaign.

Commissioner Gwendolyn Pimentel Gana told the Inquirer in recent interviews that the CHR had investigated nearly 3,300 extrajudicial killings (EJKs) in Metro Manila, Central and Southern Luzon resulting from police operations and vigilante killings between May 2016 and March 2021.

Of the total, 1,912 people were killed in police operations, while 1,382 others died in attacks by unidentified assailants.

Gana said they had based their initial findings in a report that would be made public in about a month on affidavits or statements of relatives of those who were killed in the police operations, as well as on police and autopsy reports.

The PNP reported 6,011 deaths in police operations nationwide from July 2016 to December 2020. It said that the drug suspects were killed when they fought back against police officers.

Police Lt. Gen. Guillermo Eleazar, the acting national police chief, did not immediately respond to the Inquirer’s request for comment.

Gana said they chose the three regions because they accounted for 55 percent of all the cases nationwide.

“It’s a good sample of the kind of cases … and it could give a good picture of what could happen, the same kind of modus operandi,” she said.

The highest number of casualties came from buy-bust operations, followed by those from the service of search or arrest warrants, she said.

Gana said almost all the cases showed “several circumstances and evidence that showed possible abuse of strength and intent to kill.”

This intent was observed in the number and location of bullet wounds, and the manner in which the victims were killed.

“A lot of them were shot in the abdomen, torso and the head,” Gana said, adding that the nature of the wounds did not indicate that the police did not just try to stop the victim from fighting back.

“There was an intent to kill in the way the wounds were inflicted and the location of the wounds. There was a use of excess force, unreasonable [violence],” she said.

Gana cited as example the killing of 17-year-old Kian delos Santos, who was shot at least two times in the head and back as he was kneeling.

She said there were instances where witnesses claimed the victims “were physically not even able to fight back,” contrary to police claims.

“Several times the police barged in when the victim was sleeping,” she said.

The number of fatalities also far exceeded the number of police operations. In 451 operations across Manila, Region 3 and Region 4, police killed 537 alleged drug offenders without a single casualty on their side.

The most prominent example of this was the Aug. 16, 2017, “one-time, big-time” operation in several parts of Bulacan province, killing 32 people.

After learning about the number of alleged suspects killed, the President remarked: “The ones who died in Bulacan, 32 in a massive raid, that was good. If we could just kill another 32 every day, then maybe we can reduce what ails this country.”

The CHR report will likely be the first comprehensive one by a state agency on the killings in the drug war, which critics say has taken tens of thousands of lives since 2016.

Other international and local institutions like the Ateneo School of Governance and the multisectoral coalition InvestigatePH have also looked into one of the top policies of the Duterte administration.

Gana said they hoped the report could complement the reinvestigation of EJKs by an interagency body headed by the Department of Justice (DOJ).

The CHR was supposed to be part of that panel, but both the commission and the DOJ admit they have not coordinated as much. The PNP and DOJ also refused to share information with the CHR, Gana said.

“The government is still lacking in transparency,” she said. “They seem to not understand that this is also for their benefit. If the police will be transparent and forthright in sharing documents with us, we would be able to know what their version of events is. [We] can find a common finding on the statement of facts.”