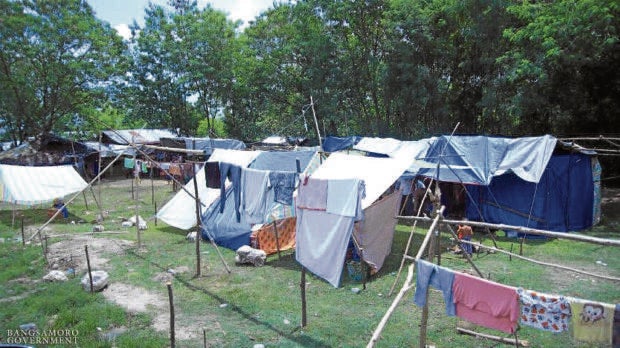 COTABATO CITY, Maguindanao, Philippines —Huddled with her two kids in a makeshift shelter, Nada Sampato of Barangay Kitango in Datu Saudi Ampatuan, Maguindanao, expressed exasperation at the endless ordeal of displacement that they have to undergo.

“When I was still young, I experienced fleeing, running away from our home in the middle of the night [to avoid the crossfire],” Sampato told a team of government relief workers. “Now my children are experiencing the same.”

Sampato, now 21, grew up in the tumultuous years of Central Mindanao, beginning with the all-out war in 2000 between government troops and the Moro Islamic Liberation Front (MILF).Two more major wars, in 2003 and 2008, were fought before peace negotiations would gather enough steam, culminating in the signing of the Comprehensive Agreement on the Bangsamoro (CAB) on March 27, 2014.

The same area, also called “SPMS box” (for Salbo, Pagatin, Mamasapano and Shariff Aguak), including Sampato’s village, is the flashpoint of armed hostilities with government troops.

On March 18, around 50 BIFF gunmen clashed with Army troopers in Kitango, sending Sampato’s family and hundreds of others in nearby communities scampering for safety.

Lt. Col. John Paul Baldomar, speaking for the Army’s 6th Infantry Division, said many residents had already evacuated the night before “because they saw the BIFF in their village.”

As of March 21, the Ministry of Social Services and Development (MSSD) of the Bangsamoro Autonomous Region in Muslim Mindanao (BARMM) counted 9,347 families, or 46, 735 people, who were displaced due to the recent skirmishes.

Apart from the MSSD and the Ministry of the Interior and Local Government’s Rapid Emergency Action on Disaster Incidence (READi), Oxfam, Health Organization for Mindanao, Community Organizers Multiversity and the United Nations Children’s Fund are providing relief assistance to the evacuees.

READi said a civilian, identified as Alhamie Magalang Silongan, 33, was hit by a stray bullet on March 19, and relief workers were verifying the death of a child in the evacuation center due to diarrhea.

Two minors were also reportedly injured during the skirmishes.

As of Tuesday, Baldomar said 14 BIFF gunmen were killed while 25 were wounded. But Abu Jihad, the BIFF spokesperson, told a local radio that only three of their members were killed and seven wounded.

Baldomar said the Army was assessing the security situation in the communities and would recommend soon if the people would be allowed to go home.

“I hope the government can really find a solution, a permanent solution, because this is happening repeatedly in our town,” Bainot, a 39-year-old mother of four, told the Inquirer.

“When will this conflict end? It is avoidable but still happening, why?” Bainot asked.

“The irony is that previous combatants in civil war conflicts that ought to be retired by decommissioning and normalization processes were instead training their weapons against each other, against indigenous peoples, and against other claimants of the lands within and surrounding their camps,” the report said.

“These claims are now exacerbating tensions and undermining the postconflict normalization process,” it added.