X-ray bares grim image for jobseeker: Knife stuck in his chest for more than a year 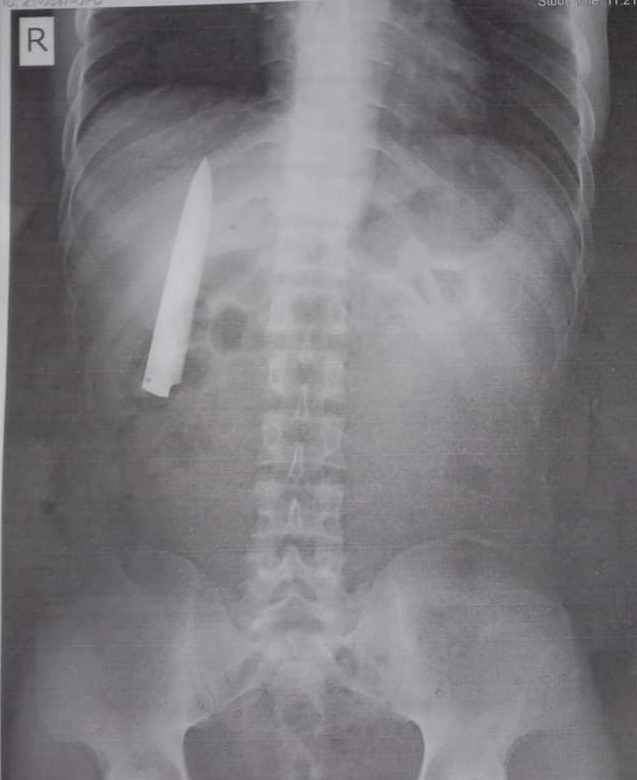 The X-ray image showing a knife in the chest of Kent Ryan Tomao, a resident of Kidapawan City. PHOTO FROM KENT RYAN TOMAO WITH PERMISSION

KIDAPAWAN CITY—A 25-year-old man from this city is seeking help to remove a knife which is still stuck in his chest more than a year after he was stabbed and almost died.

Kent Ryan Tomao discovered the four-inch metal still stuck in his chest after getting an X-ray that he needed to apply for a job in a mining company in Agusan del Sur.

Tomao said he was shocked when told by the doctor about “an object resembling a knife” that is just a few inches from his lungs.

Tomao told a local radio station that back when he was treated for a stab wound more than a year ago, he did not know if an X-ray procedure was performed on him, which could have revealed the knife in his chest.

Tomao narrated that after he recovered from the stab wound, he did not notice anything unusual with his body except that he always felt some internal pain during cold weather.

“I always wonder why I feel some pain in my chest when the weather is cold. But I have no idea there is a knife in my chest,” Tomao said in the vernacular.

Today, Tomao said he has no intention of suing the doctor who treated him in 2020, and the government-owned hospital where he was admitted. He declined to name the doctor and the hospital.

But he said his mother, who watched over him while in the hospital, knew the doctor.

“I am just seeking help so it (knife) can be removed,” he pleaded.

Tomao recalled that while riding in a tricycle on the way home from work on Jan. 4, 2020, he was stabbed by some teenagers.

He said he was told that he was almost lifeless when rushed to a government-owned hospital.

Tomao said he hoped to return to Kidapawan City to have the knife removed from his chest so he can land the job he was applying for in the Agusan del Sur mining company.