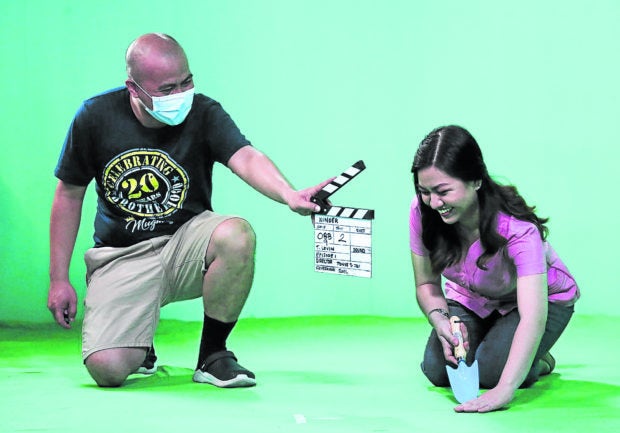 FILE. Levin Pabriaga, 26, uses a small shovel in a gardening scene for a learning episode for Kindergarten students. Pabriaga is among the first batch of teachers who applied for and was selected by the Department of Education to be among its broadcast teachers who record episodes for its distance learning program. INQUIRER PHOTO/LYN RILLON

MANILA, Philippines — The Makabayan bloc is seeking an investigation into the alleged delay in the compensation of media and production workers of DepEd TV project, one of the platforms introduced by the education department under the blended learning amid the pandemic.

Under House Resolution No. 1662, the House bloc is urging the committee on labor and employment to investigate the issue, in aid of legislation. The lawmakers are also calling on the committee to look into the alleged violations on labor standards under the DepEd TV project.

“DepEd has the moral responsibility to ensure that the workers under their contracted service providers should be properly compensated without delay, especially under the economic hardships due to the COVID-19 pandemic,” the lawmakers said.

“Compliance with all the rights and benefits under contracting and subcontracting agreements are ensured by the Labor Code. Further, Labor Code provides that in the event of any violation of the labor laws, including failure to pay wages, there exists solidary liability on the part of the principal and the contractor,” they added.

In July 2020, DepEd partnered with Ei2Tech, a private production company owned by TV broadcaster Paolo Bediones, to set up DepEd TV. However, later on, several workers in the project complained of delayed pay.

In December 2020, DepEd Undersecretary Alain Pascua denied that the production workers have yet to be paid despite working nonstop for months.

Pascua, however, admitted that there were “delays in the processing of full payments for contractors who have already completed what is required of them.”

“The company Ei2 Tech, Inc., and officials must be made to explain their part and actions regarding the complaint of the [executive producers],” the lawmakers said.

“It is obligatory upon the members of Congress to protect the Constitutionally-protected rights and promote the welfare of our workers and their families, regardless of terms of employment or engagement,” they added.