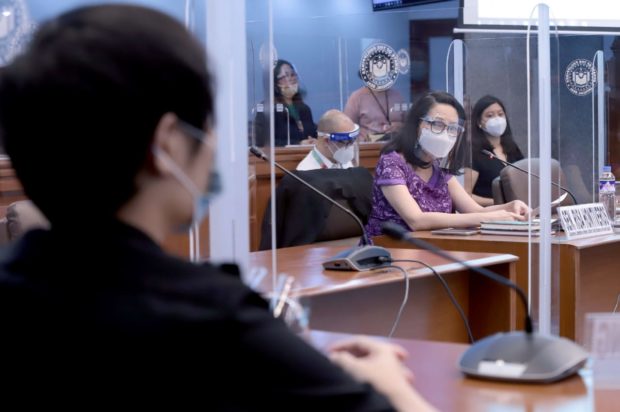 Senator Risa Hontiveros says the government must go after the masterminds behind the “festering pool of corruption” within the Bureau of Immigration responsible for the so-called “pastillas scam,” during the Senate Committee on Women, Children, Family Relations and Gender Equality hearing, Tuesday, October 6, 2020.  (Albert Calvelo/Senate PRIB)

MANILA, Philippines — The group at the Bureau of Immigration allegedly behind the controversial “pastillas” scam was tagged in another scheme, this time, involving the outbound trafficking of Filipino women to Syria.

During a Senate women committee hearing on Tuesday, panel head Senator Risa Hontiveros said the “same cast of characters” linked to the “pastillas” scam are being mentioned in the alleged involvement of immigration officers to the trafficking of Filipino women.

(The names being repeatedly mentioned by our whistleblowers in the illegal entry of Chinese nationals in the Philippines are the same names our witnesses have been giving in the trafficking of Filipino women. Same cast of characters, different crimes.)

Under the “pastillas” modus, Chinese nationals are offered a seamless entry into the country in exchange for P10,000 in “service fee” each.

In the alleged trafficking scheme, immigration officers are allegedly paid P50,000 for each Filipina woman trafficked out of the country, as claimed by four victims, who came forward and sought help from Hontiveros office.

“Our women are abused in ways that approach crimes against humanity,” Hontiveros said.

The senator had asked the BI to furnish her the names of the immigration officers, who stamped the passports of her office’s four witnesses claiming to have been trafficked out of the country.

During the hearing, BI Commissioner Jaime Morente named the four officers who he said were involved in the stamping of the exit documents of the four Filipino women.

Ortañez is the son of Erwin Ortañez, the overall Travel Control Enforcement Unit head under former Ports Operations Division (POD) chief Marc Red Mariñas, who has been accused of being the alleged ringleader of the “pastillas” scam.

Mariñas has repeatedly denied having any knowledge of the “pastillas” scheme.

During the Senate hearing, Hontiveros also presented screenshots of Viber group chat messages given to her office by “pastillas” whistleblower Allison Chiong.

The group chat was named “T1 TAAS (OCT),” which Chiong said stands for the departure area at Terminal 1 in the Ninoy Aquino International Airport.

The screenshots displayed the list of names of the women to be allegedly trafficked out of the country, signed off by a certain “FM.”

Senator Joel Villanueva asked Chiong whether the “mafia” facilitating the “pastillas” modus is the same group involved in the trafficking of Filipino women.

(Is it clear to you that the mafia group involved in the ‘pastillas’ scheme is the same group facilitating this trafficking?)

“This is a well-built business model,” he also said.

(Although I’m not part of the group at the departure area, based on my personal knowledge and from what I heard from fellow officers, the ones running the arrivals are the same ones handling the departures.)

Chiong, meanwhile, mentioned that those in the “frontline” of the scheme, or so-called “foot soldiers,” were made to believe that the Filipino women will all end up in Dubai and will not be in harm’s way.

(In fairness to the immigration officers at the frontline, what the bosses and the admin of the Viber group chats, that all of the women will all go to Dubai. Even if their flight is in Malaysia or Hong Kong, they will board a connecting flight to Dubai.)

(So in when it comes to that, there’s already fraud within the organization. The bosses are saying that all of the women are bound for Dubai, nothing will happen to them.)

During the hearing, a trafficked overseas Filipino worker (OFW), identified as “Diana,” recalled her ordeal and disclosed she was forced by her recruiters to have an abortion before being “sold” to her employers in Syria.

“We need to crack down on the human trafficking operation in the Bureau of Immigration. This is an outright violation of the Anti Trafficking in Persons Act. The names found to be involved in this crime will be sentenced to life imprisonment,”  Hontiveros said.

Morente, for his part, assured his “all-out” support for the investigation being done by Hontiveros’ committee.

(I am one with you in this desire to have those involved in the trafficking of Filipino women punished.)