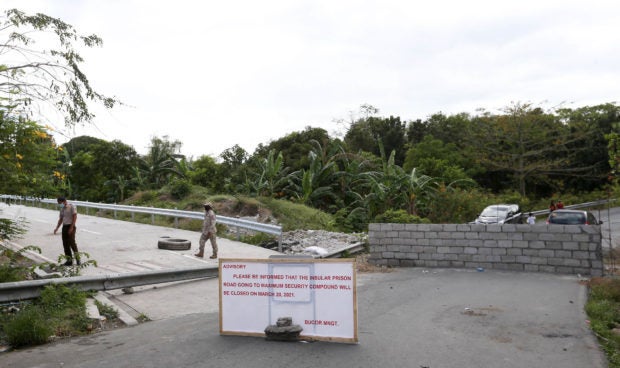 MANILA, Philippines — The Bureau of Corrections (BuCor) on Monday defended its construction of a wall that would make it harder for Southville 3 residents in Muntinlupa to reach the city proper, saying the project should have been done 15 years ago.

Muntinlupa Rep. Ruffy Biazon, however, said the wall being built on Insular Prison Road was illegal and must be removed immediately.

“That wall is illegal and a nuisance as defined by Article 694 of the Civil Code as it obstructs and interferes with the free passage of a public highway or street,” said a statement from Biazon who also raised the matter with Justice Secretary Menardo Guevarra. The BuCor is under the jurisdiction of the Department of Justice (DOJ).

In a letter to Guevarra on Monday, Biazon said the closure of the road, most especially during the pandemic, was “very inconsiderate of the plight” of his constituents.

“May I respectfully request that the structures built to close Insular Prison Road be immediately removed and that access be restored to the condition prior to the erection of the said obstruction?” he asked Guevarra.

Biazon said no proper coordination was made with the city government regarding the wall, adding that there were also no consultations with national and local government agencies concerned, including the National Housing Authority (NHA) and the Department of Public Works and Highways.

“The wall compromises the safety, security and health of Southville 3 residents because it is blocking the most accessible entry into Southville 3 which will enable police, fire, and emergency services to quickly respond should the need arise,” he said.

Biazon also filed on Monday House Resolution No. 1666 seeking an investigation into the matter.

In a phone interview, Gabriel Chaclag, spokesperson for the BuCor, told the Inquirer that it was “about time” to close Insular Prison Road, which had been a “temporary” thoroughfare for Southville 3 residents for the past 15 years.

Chaclag explained that for security reasons, the road was not meant to be used by the public, only New Bilibid Prison, because of its proximity to the maximum security compound wall. The thoroughfare runs directly alongside the wall of the prison compound.

“We do not prevent residents of NHA Southville 3 from accessing the city proper. In fact, we continue to open the bigger road within [the Bilibid] compound called Biazon Road going to Alabang and also going to the city proper,” he said.

“Residents in the area only probably got used to accessing the road as a shortcut for 15 years. But we need to rectify that now,” he added.

Southville 3 is an NHA socialized housing project located on the Bilibid reservation. It is home to 8,000 families or around 40,000 people.

The Muntinlupa City and Barangay Poblacion councils on Monday approved separate resolutions condemning and opposing the closure of the road.

Raul Corro, the city council majority leader, said the resolution primarily requested the DOJ to order the BuCor to remove the wall.