The health service finally acknowledges that coronavirus lineages may be behind the rapid increase in COVID-19 cases. It says it is waiting for confirmation of community transmission from the World Health Organization.
By: Dona Z. Pazzibugan - Reporter / @dpazzibuganINQ
Philippine Daily Inquirer / 05:30 AM March 23, 2021 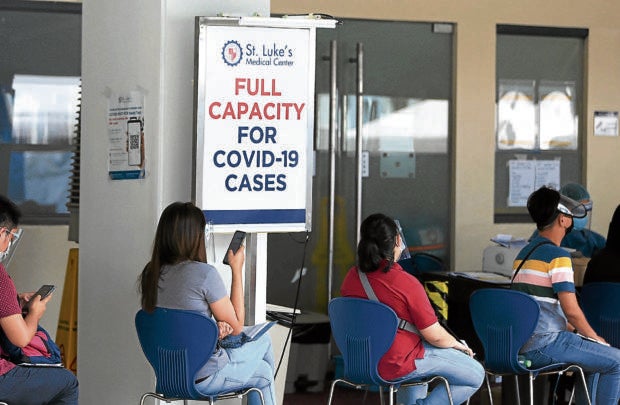 ROOMS FULL In this photo taken on March 15, St. Luke’s Medical Center in Quezon City informs patients that it cannot accommodate COVID-19 patients as the hospital has reached capacity for such cases. —NIÑO JESUS ORBETA

MANILA, Philippines — The Department of Health (DOH) on Monday said two highly contagious variants of the coronavirus had been detected in all cities in Metro Manila and these may be driving the rapid increase in COVID-19 cases in the metropolis in the past few weeks.

The DOH said it was waiting for confirmation from the World Health Organization (WHO) of widespread community transmission of the B.1.1.7 variant first detected in the United Kingdom and the B.1.351 variant first reported by South Africa late last year.

But WHO representative to the Philippines Rabindra Abeyasinghe, speaking in a televised briefing on Monday, did not attribute the flare-up solely to the variants but to also to vaccine optimism that had led to people letting their guard down.

Abeyasinghe said the WHO had been seeing a global increase in COVID-19 cases in the past four weeks.

“After a stabilization of transmission in January and early February, we have seen now that globally, in several countries, we are seeing an increase in transmission,” Abeyasinghe said.

The increase has also been seen in countries that have had successful vaccine rollouts so the situation cannot just be blamed on slow government response, he said.

But in addition to a change in people’s behavior, the increase in cases, he said, can also be linked to the spread of the new variants of the coronavirus.

“So the mix of these factors could actually be causing higher levels of transmission in the Philippines also,” Abeyasinghe said.

The DOH conceded that the presence of the highly transmissible variants in Metro Manila is a factor in the faster increase in daily cases than at the height of the pandemic in July and August last year.

“So, yes, we can say the variants are here and yes [their presence] has contributed to the increase in the number of cases, how they increased very fast. But that is not the only factor,” Vergeire said.

She said the root of the problem was the public’s failure to comply with health measures and some “institutional gaps.”

Through genetic analysis of samples from select COVID-positive cases, the Philippine Genome Center has so far detected the B.1.1.7 variant in 223 cases. Six of them have died, 167 have already recovered while 50 are still active cases.

The UK variant has been detected in seven of the country’s 17 regions, mostly in Metro Manila (76 cases) and the Cordillera Administrative Region (41).

Meanwhile the B.1.351 variant has been detected in 152 cases; four of them have died, 86 have recovered, while 61 are active cases.

The South Africa variant has been detected in six regions, mostly in Metro Manila (105).

The Philippine Genome Center has also detected the P.1 variant first detected in Brazil in one COVID-positive Filipino who returned from Brazil and had since recovered.

A coronavirus variant called P.3 first detected in the Philippines has been found in 104 cases; 96 of them have recovered, while the rest are still active cases.

The DOH said there was not enough evidence to conclude whether the P.3 variant was a “variant of concern.” Monday saw the highest number of confirmed cases in a single day, with 8,019 new infections reported by the DOH.

The DOH said four more patients had died, bringing the death toll to 12,972, and 103 others had recovered, pushing total recoveries to 577,850. That left the country with 80,970 active cases, the second highest number since the pandemic started.

Cavite had the most number of coronavirus infections in the Calabarzon region, with 23,156 cases, according to the DOH regional office.

The government has expanded the general community quarantine restrictions in Metro Manila to Cavite, Laguna, Rizal, and Bulacan up to April 4 to suppress the spread of the coronavirus.

Vergeire said the impact of the two-week quarantine can be seen three to four weeks later. She said experts who assessed the results of the “timeout” in the health-care system in August last year found that cases went down after three to four weeks.

“But they also saw that [hospitalizations] continued to increase for about a month” before these eventually went down,” she said.

“We have a law that during a surge in cases, [hospitals must] help the government [by] expanding their [capacity] to accommodate more patients,” she said.

The DOH, however, acknowledged that hospitals are hobbled by staff shortage as many of their health workers have either caught the virus, gone on leave, or resigned so that the hospitals cannot expand their capacity without hiring new workers.

“[W]e’re discussing the health care worker augmentation and how we can find ways to deploy more personnel,” Vergeire said.

Last year, she said, the DOH asked other regions that were “not so much affected by COVID-19” to deploy their health workers to high-risk areas.

Health experts and advocates blame the surge on the premature reopening of the economy, but Trade and Industry Secretary Ramon Lopez sees gatherings as the reason for the big waves of daily cases.

In a radio interview on Monday, Lopez said the number of new infections was not so high when the government gradually reopened the economy last year.

Behind the current surge in cases, he said, were “secret parties” where people who were tired of the lockdown met up with family and friends.

Asked by reporters through Viber if he had data supporting his claim, Lopez replied: “No data. But those were observations. Look around.”