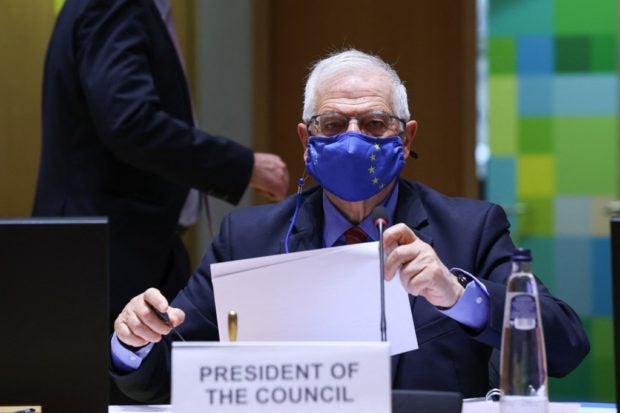 High Representative of the Union for Foreign Affairs and Security Policy and Vice-President of the European Commission in charge of a stronger Europe in the World, Josep Borrell arrives for a meeting with European Foreign Affairs Ministers at the European Council in Brussels, on March 22, 2021. (Photo by Aris OIkonomou / various sources / AFP)

The 27 nations are due to place four Chinese officials and one state-run entity on a blacklist over Beijing’s crackdown on the Uighur minority after ambassadors gave the go-ahead last week.

China’s foreign ministry has warned that Beijing will “react with a firm hand” against any punishment over its actions in the western Xinjiang region.

The measures are part of a package of human rights sanctions targeting a dozen people that also includes individuals in Russia, North Korea, Eritrea, South Sudan and Libya, diplomats said.

“This is a very important step which shows how committed we are,” Slovak Foreign Minister Ivan Korcok said.

The mechanism — designed to make it easier for the bloc to target rights abusers — was launched this month with sanctions on four Russian officials over the jailing of Kremlin critic Alexei Navalny.

Diplomats said the fresh sanctions on Russia will target individuals behind abuses in the country’s Chechnya region, which is ruled with an iron-fist by Kremlin loyalist Ramzan Kadyrov.

The EU will also slap asset freezes and visa bans on 11 officials of Myanmar’s junta over the military coup last month and crackdown on demonstrators.

“What we see there in terms of excesses of violence is absolutely unacceptable,” German Foreign Minister Heiko Maas said.

“That is why we will not be able to avoid imposing sanctions.”

Myanmar has been in turmoil since the military ousted civilian leader Aung San Suu Kyi on February 1, triggering a mass uprising that security forces have sought to crush with a campaign of violence and fear.

Diplomats have said businesses tied to the military will likely be placed under sanctions in the coming weeks.

Turkey will feature prominently at the meeting as member states debate efforts to improve ties after a spike in tensions last year over the eastern Mediterranean.

Brussels has welcomed steps by Turkish President Recep Tayyip Erdogan to reduce tensions by restarting talks with Greece over their disputed maritime border.

But there remain major concerns, including over domestic freedoms after moves to ban a key opposition party and Erdogan’s decision to leave a global treaty to prevent violence against women.

EU foreign policy chief Josep Borrell has drawn up a report outlining the bloc’s options to be discussed by leaders at a video conference this week.

Warming ties have seen efforts to impose sanctions agreed on in December over Turkish drilling off Cyprus put on the back burner for fear of derailing the rapprochement.

“There are different signals from Turkey,” Maas said.

“We will continue to try to remain in dialogue, but also to use this dialogue to address the issues where we believe that Turkey is sending out the wrong signals.”