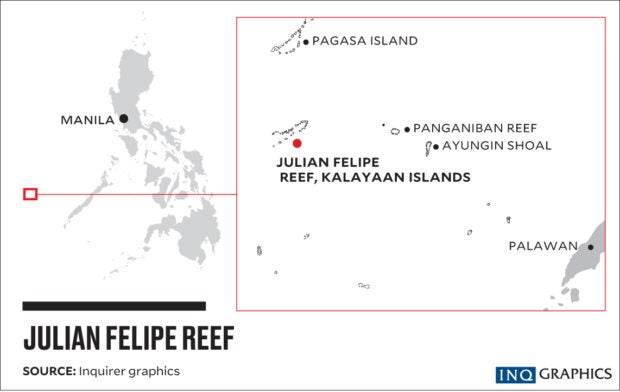 MANILA, Philippines — The Philippines has expressed concern that some 220 vessels, believed to be manned by Chinese maritime militia personnel, were spotted on March 7 in the disputed South China Sea, the latest example of tensions in the crucial waterway.

The military will conduct air and sea patrols to verify the reported sighting of the Philippine Coast Guard (PCG) two weeks ago of Chinese fishing vessels lined up and moored in an area within the country’s exclusive economic zone (EEZ) near Palawan.

“So recommended by General Esperon this noon … I got the coordinates, so to speak, And relayed to my legal artillery, Fire at will,” he said.

Earlier, Hermogenes Esperon Jr, the national security adviser, despite receiving photos and a report from the PCG as chair of the National Task Force for the West Philippine Sea, said he would still have to study further whether to recommend the filing of a diplomatic protest.

The task force has expressed concern about overfishing and destruction of the marine environment, as well as risks to safety of navigation.

In a statement on Sunday, Defense Secretary Delfin Lorenzana described the presence of 220 militia boats within the country’s EEZ and continental shelf as a “clear provocative action of militarizing the area” and said he viewed their presence in the area with grave concern.

“We call on the Chinese to stop this incursion and immediately recall these boats violating our maritime rights and encroaching into our sovereign territory,” he said.

China’s foreign ministry did not immediately respond to a request for comment on Sunday, and calls to the Chinese Embassy in Manila seeking comment went unanswered.

The Chinese vessels were at the Julian Felipe Reef, also called Whitsun Reef, within the exclusive economic zone, the task force said, describing the site as “a large boomerang-shaped shallow coral reef at the northeast of Pagkakaisa Banks and Reefs” in the Kalayaan Island Group.

Muntinlupa Rep. Ruffy Biazon, in a text message to the Inquirer, said on Sunday that the Philippines should engage its allies to counter China’s aggression in the disputed South China Sea.

“I think the diplomatic protests should continue to be pursued,” Biazon, an ally of President Duterte in the House of Representatives, said.

Biazon, vice chair of the House committee on national defense and security, said the recent action of China “is proof that we can never trust them on matters concerning the conflicting interests in the WPS.”

“Is this action of China in exchange for the vaccines they donated [to the Philippines]?” Zarate asked.

The Pambansang Lakas ng Kilusang Mamamalakaya ng Pilipinas (Pamalakaya), a progressive fishermen’s group, on Sunday said the presence of more than 200 maritime militia vessels in the disputed waters was a “blatant show of force” that was bordering on military aggression.

“Monitoring like sitting ducks will not drive away the Chinese vessels [from] our waters,” Fernando Hicap, the national chair of Pamalakaya, said in a statement. “This is frighteningly alarming [and] needs an unhesitating response and action from the government.”

“They have no business here as they violate our sovereign rights and cause environmental destruction of our marine resources,” he said.