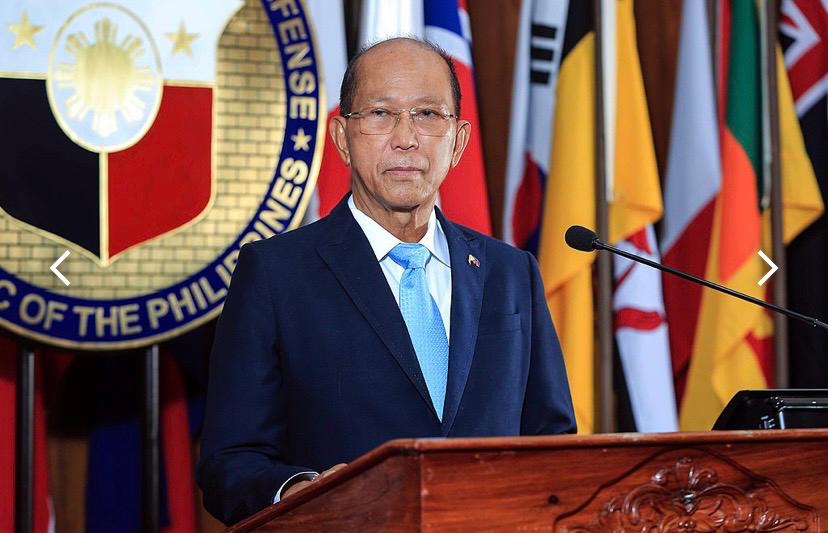 MANILA, Philippines — China must stop its incursion into Philippine territorial waters and recall its vessels that were spotted in the West Philippine Sea (WPS), Defense Secretary Delfin Lorenzana said in a statement on Sunday.

Lorenzana issued the call following reports that over 200 Chinese militia boats were spotted in the Juan Felipe Reef — an area within the exclusive economic zone and continental shelf of the Philippines, and which “Filipinos have the sole right to resources under international law.”

“We call on the Chinese to stop this incursion and immediately recall these boats violating our maritime rights and encroaching into our sovereign territory. We are committed to uphold our sovereign rights over the WPS,” Lorenzana said in his statement.

“We view with grave concern the presence of 220 Chinese militia boats in the Julian Felipe Reef (Union Reef) in the West Philippine Sea. This is a clear provocative action of militarizing the area. These are territories well within Philippine Exclusive Economic Zone (EEZ) and Continental Shelf (CS) where Filipinos have the sole right to resources under international law and the 2016 arbitral ruling,” he added.

A report early Sunday from the Philippine Coast Guard (PCG) showed that 220 vessels were found in line formation at the Juan Felipe Reef last March 7 — leading the National Task Force West Philippine Sea (NTF-WPS) to warn against the possibility of overfishing and destruction of the marine environment.

The Julian Felipe Reef is located just around 175 nautical miles west of Bataraza, Palawan, according to the NTF-WPS.

“We are coordinating with the Philippine Coast Guard, the National Task Force for the West Philippine Sea and the Department of Foreign Affairs for appropriate action in the context of protecting the welfare of our Filipino fishermen, our marine resources, and maintaining peace and stability in the West Philippine Sea,” Lorenzana assured the public.

Earlier, DFA Secretary Teodoro Locsin Jr. said that they are awaiting the recommendation from the Armed Forces of the Philippines for the filing of a diplomatic protest over the incursion.

“Still waiting for the order to fire. I listen only to Generals, never media or an NTF (national task force) press release which amounts to nothing. Only a shot from DFA (Department of Foreign Affairs) counts,”  Locsin said over Twitter on Sunday.

READ: Locsin waiting for AFP’s ‘order to fire’ protest on presence of 220 Chinese ships in WPS

This is not the first time that China made an incursion in the West Philippine Sea that led to the filing of several diplomatic protests by the Philippines.

However, even as the Permanent Court of Arbitration in 2016 ruled in favor of the Philippines and invalidated China’s nine-dash line claim, China said it will not acknowledge the decision.

Read Next
Amid surge in COVID-19 cases, Velasco urges public to ‘stay-at-home’
EDITORS' PICK
ANALYSIS: SBP’s problem is way bigger than its coach
Summit breakthrough – EJ Obiena is the first Filipino to win in the World Athletics Championship
House energy committee chair Arroyo bats for cheap electricity
As Duterte stepped down, more Filipinos tighten belts to make ends meet
DepEd seeks P16B addt’l funds for repair of schools damaged by Abra earthquake, typhoons
12.2M Filipino families felt ‘poor’ in Q2 of 2022 — SWS survey
MOST READ
Six wounded in Iloilo shooting incident
Vice Ganda apologizes for ‘Miss Q and A’ contestant who made inappropriate joke on ‘It’s Showtime’
Giselle Sanchez slammed by Floy Quintos: ‘Art has nothing to do with your choice’
Vhong Navarro defended by ex-wife Bianca Lapus amid rape charges order: ‘Standing by this good man’
Don't miss out on the latest news and information.