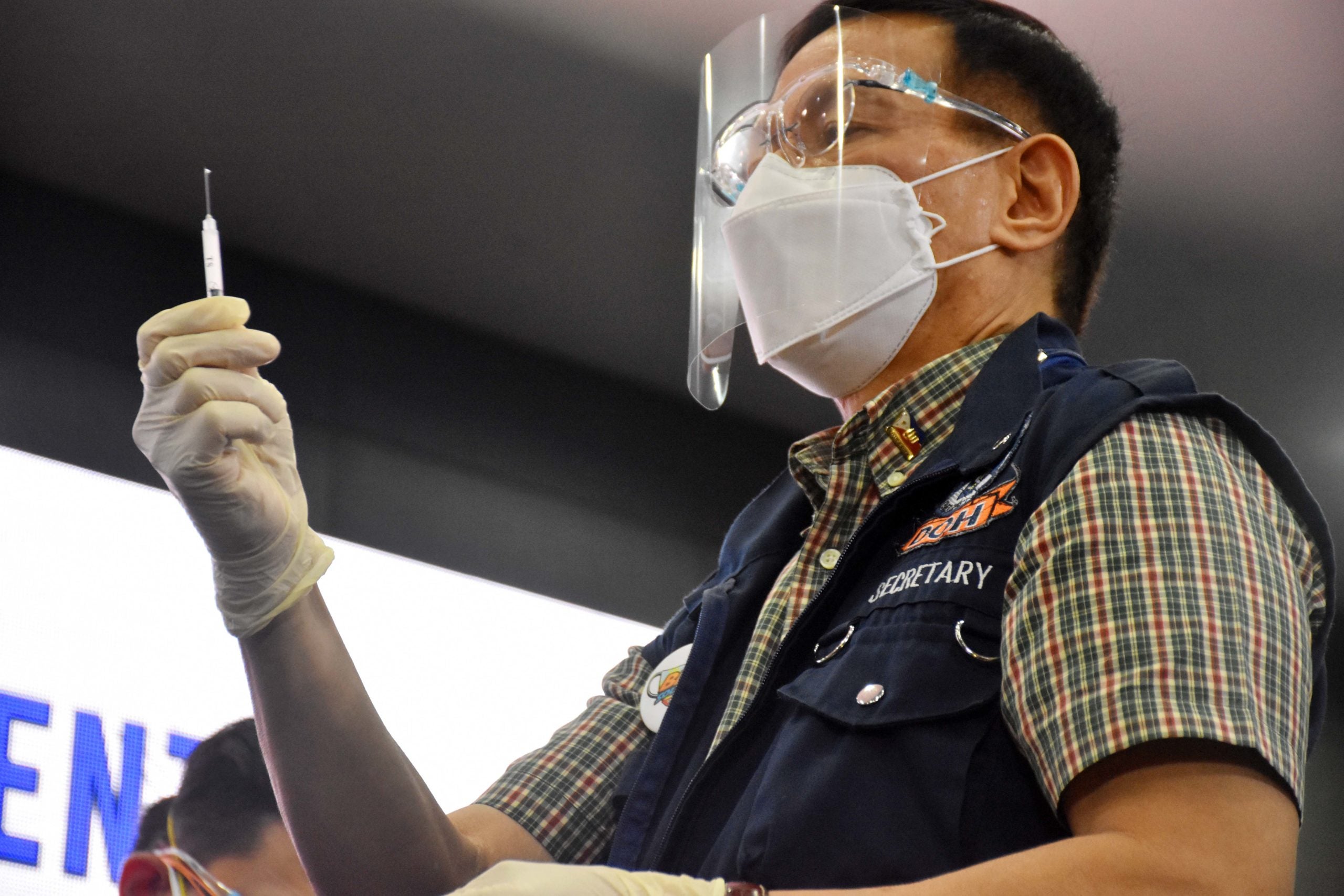 (FILE) Health Secretary Francisco Duque prepares to inject a vaccine into the arm of a health worker in Dagupan City. WILLIE LOMIBAO

MANILA, Philippines — Several lawmakers were alarmed by a supposed draft administrative order barring several companies “in conflict with public health” from procuring COVID-19 vaccines, with one senator saying the alleged attempt to impose the ban is “illegal and unauthorized.”

“I am deeply disturbed by this report. If indeed such a draft administrative order exists, that is a clear violation of the COVID-19 Vaccination Act of 2021. Such a policy is discriminatory and morally unacceptable. The DOH (Department of Health) does not have the authority to do that,” Senate Minority Leader Franklin Drilon said in a statement Sunday.

“Who is playing God here once more? Please stop playing God. This is not the time for politics and selfish agenda. It is our moral responsibility to share the vaccine,” he added.

The supposed draft administrative order, Drilon noted, stated that the National Task Force Against COVID-19 (NTF) and the DOH will be tasked to “review the requests of private entities to procure vaccines to ensure that private entities who will be part of the agreement are not in any way related to the tobacco industry, products covered under [Executive Order] 51 series of 1986 or the ‘National Code of Marketing of Breastmilk Substitutes, breastmilk Supplement and Other Related Products’ or other industries in conflict with public health.”

For the DOH and the NTF to do this is “unlawful,” according to Drilon, a former Justice secretary.

“The law does not discriminate against or exclude companies based on their products, services, or lines of business. The supposed administrative order, therefore, is discriminatory and it would go beyond the law and would constitute an actionable wrong,” he added.

Drilon then warned Health Secretary Francisco Duque III that he will call for a Senate investigation if the latter insists on “banning private entities from taking part in the vaccination program.”

Further, he cautioned that the DOH and NTF officials could expose themselves to legal liabilities, including nonfeasance under the Revised Penal Code.

The minority leader said it would be best for the DOH to recall the alleged order immediately.

“The law recognizes the role of the private entities in arresting the pandemic. That law made them partners of government in ensuring that the workforce is safe and protected from the COVID-19,” he said.

Drilon said the vaccination program should cover all sectors.

“What is wrong with these people in the DOH and NTF that they will not allow private wealth to be used for public welfare?” Recto said in a separate statement.

“If these merchants of sin would like to plow back their profits in the form of vaccines, half for their workers and half for the people, why would a fumbling government illegalize such an offer of help?” he asked.

“The COVID Vaccination Law has ironclad rules and guarantees that will prevent and punish any violation in the procurement, prioritization, and administration of vaccines,” he added.

In the House of Representatives, Anakalusugan party-list Rep. Mike Defensor scored the DOH for “discriminating” against certain industries.

“We are now dealing with the defining health and socio-economic crisis of our time. We need all hands on deck in suppressing this pandemic,” Defensor said.

“The DOH should not stand in the way of any private corporation that wishes to procure its own supply of vaccines so that it can protect its workers…We have to accept the fact that these industries also employ tens of thousands of Filipinos who need vaccination,” he added.

Not yet final, unofficial

The DOH, however, said the supposed draft administrative order that has been circulating is not yet final and that the department and the NTF “are still in the process of reconciling the proposed provisions with other existing laws and guidelines.”

“The [DOH] was made aware of the circulation of an unofficial draft DOH Administrative Order outlining some selected sections of the draft Implementing Rules and Regulation (IRR) of Republic Act No. 11525 or the COVID-19 Vaccination Law,” it said in a statement.

The DOH emphasized that the government “commits to provide all Filipinos equitable access to COVID-19 vaccines following the prioritization criteria and list approved by the Inter-Agency Task on Emerging Infectious Diseases.”

“The development of the IRR is guided by the principles of equal respect, national equity, and legitimacy, found in the WHO SAGE Values Framework. Any provisions that may be perceived to discriminate against any sector of the population from accessing COVID-19 vaccines is not considered in any policy, guideline, protocol that shall be issued by this government,” it added.

Further, the DOH said the contents of the draft were based on recommendations coming from different stakeholders.

“The National Government commits to honor the multiparty agreement among DOH, NTF, vaccine manufacturers, and other procuring entities like the private companies and LGUs. All comments and recommendations from different stakeholders are still welcome until the finalization and approval of the IRR,” the agency said.

Read Next
Expired IATF cards, passes, are valid in areas under GCQ ‘bubble’ — Roque
EDITORS' PICK
What to watch out for when selecting a video surveillance solution
Heads may roll at BOC, says Palace if sugar smugglers are allowed to use recycled import permits
vivo brings to the Philippines a powerful smartphone with a slimmer body, the vivo Y02s for only PHP 6,499
DOH reports increase in daily COVID-19 deaths, mostly unvaxxed
Palace: Biggest supermarkets in PH commit to sell sugar at P70 per kilo
House energy committee chair Arroyo bats for cheap electricity
MOST READ
DepEd to give teachers P5K cash allowance within first week of classes
Alyssa Valdez to miss Creamline’s AVC Cup campaign
Brian Poe-Llamanzares receives his PhD in Public Administration
Ambulance driver dies of heart attack en route to pick up patient in Biliran town
Don't miss out on the latest news and information.