‘The struggle is real’ for DepEd TV teachers 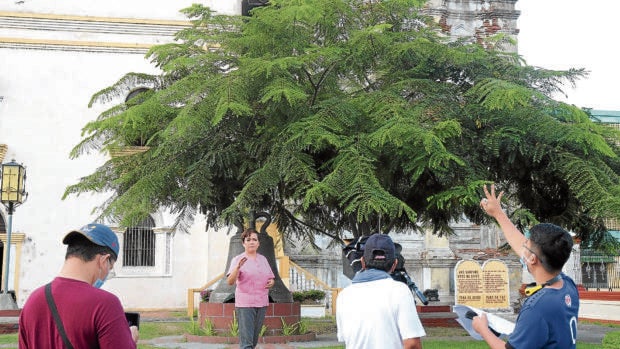 BEHIND THE SCENES Joanne Dioso Peralta, a DepEd TV teacher-broadcaster from Sual National High School (SNHS) in Pangasinan province, works with a production crew composed of her son and his volunteer friends. —CONTRIBUTED PHOTO

The first episode of “Contemporary Philippine Arts” for senior high school on the Department of Education (DepEd) TV starts with a map of the Philippines and zooms in on the Ilocos region.

Teacher-broadcaster Joanne Dioso Peralta from Pangasinan province begins the lesson with a quote from Pablo Picasso: “Every child is an artist. The problem is how to remain an artist once we grow up.”

The 24-minute introductory lecture tackles color theory and contemporary art forms. In one scene, Peralta is able to show not just an image of Juan Luna’s “Spoliarium” but also her height relative to the oil painting’s actual size.

The special effects and video editing make her seem like she is standing in front of the actual masterpiece displayed in the National Museum.

On the other side

But on the other side of the camera, this is what actually happens: Peralta stands before the green wall of the guidance counselor’s office in Sual National High School in Pangasinan. A tablet provided by the DepEd, which is in a black box atop an old camera stand, serves as her improvised teleprompter that flashes the script she has prepared.

Cameras, lights, and members of the production crew surround and direct her while she focuses on the camera and delivers the lesson to her viewers.

After the shoot that usually lasts around four hours, the videos are edited and various treatments applied to make the lecture more engaging. The team then sends the materials online to another team in the central DepEd office for quality checking before airing on national TV.

Peralta, a former radio broadcaster, says that is how most teams of DepEd TV in remote areas operate: as a stand-alone. “Since we cannot travel, we had to come up with [innovative ways] to implement the program.”

What the viewers do not see onscreen, she says, are the challenges that production teams and teacher-broadcasters in the provinces are facing, such as the lack of budget and the requirement for some of them to still report regularly to the central office.

The show is a DepEd initiative envisioned to deal with the circumstances brought about by the COVID-19 pandemic. Radio or TV broadcasting is one of the methods in the blended learning system that the DepEd introduced, along with modular and online distance learning.

DepEd TV episodes are supplementary to the modules provided to learners. Determining the effectiveness of the video lessons depends on the teacher who conducts the online or modular learning method.

Peralta says teachers needing, for example, to show the clothing or culture in the Cordillera can just use the prepared video lessons instead of worrying about taking the students to a museum or to the highlands in the middle of the pandemic.

Before shooting for DepEd TV, teacher-broadcasters like Peralta audition and undergo formal training in scriptwriting, video effects and treatments, and personality development with the help of certain TV personalities.

But in a remote setup, they are hampered by the lack of equipment such as cameras and lights.

“The struggle is real,” says Peralta. “Our funds always come late and we have to coordinate with the division office first. And that has always been our battlecry here: Where do we get the budget?”

Fortunately for her team, the school administration and faculty staff are supportive of the project and provide them the materials they need. She has also managed to partner with the local government of Sual, which sponsors resources and even a professional crew for shooting some scenes. 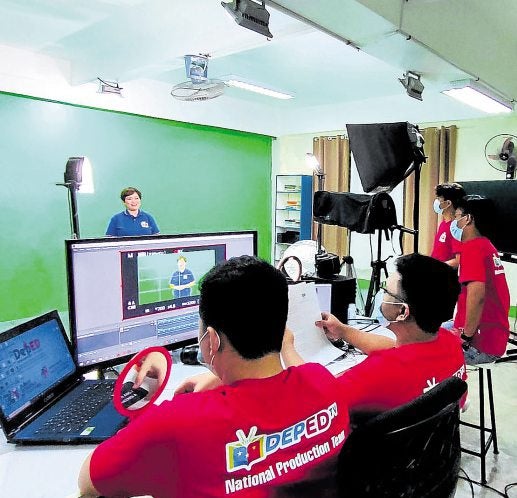 The SNHS guidance counselor’s office has also been transformed into a remote TV
studio. —CONTRIBUTED PHOTO

There’s no extra pay but Peralta’s not complaining. She takes pride in her production team of volunteers: her coteacher Jexter Untalan, who serves as the director; her son Nathan, who is the researcher; and his five friends—the camera operators, editor and production staff.

Nathan’s friends are, like himself, college students who contribute their skills and their time to the DepEd TV project. One, Kiara Magsakay, says: “I find it a noble task to serve others. We can never be too young to show that we practice ‘bayanihan.’”

Teaching in front of a camera is a totally different setup, and what makes it difficult is that she cannot hear her students’ answers, says Peralta. “Some would even comment: ‘Why is the teacher answering her own questions?’”

It is only later, through the video feedback of both students and adults, that Peralta and her team find out that the lecture was effective. “They’d say: ‘I’m already old but it’s actually engaging … Some of the lessons were not taught to us back then,’” she recalls.

The teacher-broadcasters’ hardship in producing the episodes doesn’t show. “But some have quit because of the pressure,” says Peralta. “They thought they would just stand there and that’s it.”

Others assigned to the central office could not get accustomed to traveling from their provinces to the city, where the filming is conducted, and back.

Taking part in DepEd TV, adds Peralta, is a different ballgame where logistical problems and administrative tasks deprive some teachers of the liberty to contribute to the project in their respective ways. She says their division was given a budget of only P15,000 for DepEd TV, which still has to be distributed to each school.

Johnry Mariñas, another teacher-broadcaster from Pangasinan in the same division, is supported by the administration of Parayao National High School in contributing to DepEd TV.

He says the experience has added adventure to his teaching career, given him knowledge about broadcasting, and taught him how to cope with a “unique situation.”

“They said no learner will be left behind, and [that] is our lifetime commitment as teachers of the Philippines,” says Mariñas.

For Peralta, DepEd TV is a “mission” to educate the Filipino youth. “This is ‘bayanihan’ for us and [contributing to the project] is the least we can do for our country,” she says.

DepEd TV has aired episodes for the first quarter of classes. But Peralta said airing was on hold last quarter because of issues in the central office with Ei2Tech, the production company that partnered with DepEd for the project.