Kremlin, on possible new Cold War, says: We always hope for best but prepare for worst 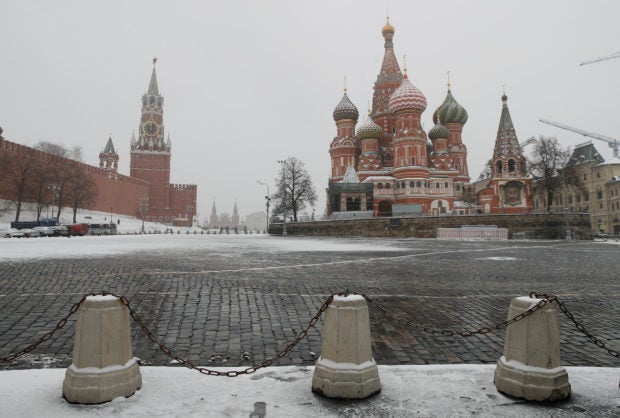 FILE PHOTO: The clock on Spasskaya tower showing the time at noon, is pictured next to Moscow’s Kremlin, and St. Basil’s Cathedral as they stand on an empty square, during the coronavirus disease (COVID-19) outbreak, in Moscow, Russia, March 31, 2020. REUTERS/Maxim Shemetov

MOSCOW — The Kremlin said on Friday that Moscow always hoped for the best but prepared for the worst when it was asked about the possibility of a new Cold War between the United States and Russia.

Diplomatic ties sank to a new low this week after U.S. President Joe Biden said he thought President Vladimir Putin was “a killer” in an interview that prompted Russia to recall its ambassador to the United States. Putin later offered Biden live online talks in the coming days.

On Friday, the Kremlin’s spokesman, Dmitry Peskov, said Putin’s offer of talks remained open and that Putin could do any time that was convenient for Biden, though the offer would not stay on the table indefinitely.

“Putin said that despite everything there’s no point in playing at megaphone diplomacy and trading barbs. There is a point in continuing relations,” Peskov told reporters on a conference call.

He was asked about a new Cold War between the two countries.

“We, of course, always hope for the best, but are always ready for the worst. As far as Russia is concerned, President Putin has clearly stated his desire to continue ties…,” he said.

“But of course, we can’t not take into account Biden’s comments,” he said, in a reference to Biden’s interview with ABC News broadcast on Wednesday.

In it, Biden said “I do” when asked if he believed Putin was a killer, prompting Putin to cite a Russian children’s playground chant in response saying “he who said it, did it”.

Biden also described Putin as having no soul in the interview, and said the Russian leader would pay a price for alleged meddling in the November 2020 U.S. presidential election, something the Kremlin denies.