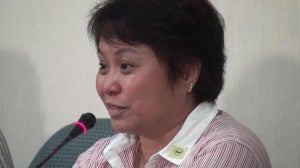 Chief Justice Renato Corona is now the subject of an income tax deficiency assessment by the Bureau of Internal Revenue (BIR) to establish whether he had paid the correct amount of taxes from January 1997 to December 2010.

Henares made this revelation at the Senate impeachment court while under cross-examination by the lead defense counsel, Serafin Cuevas.

“This investigation is being conducted notwithstanding the pendency of the impeachment trial? You did not find anything objectionable (with this effort) that smacks of persecution? You see nothing wrong with it?” Cuevas asked the BIR chief.

“If the public expects us to do it.  Under the rules of the National Internal Revenue Code…,” Henares started to explain.

“Who is the public?” Cuevas snapped.

“The public we serve as revenue collector of the Philippines, whoever that public may be,” Henares coolly replied.

At the start of the cross-examination, Cuevas pointed out that Henares as BIR chief was “not… under legal obligation to examine” Corona’s statement of assets, liabilities and net worth (SALN).

She added that since the second article of impeachment was related to Corona’s supposed noninclusion of certain assets in his SALNs, she presumed that her testimony on the Chief Justice’s income tax returns (ITRs) would be compared eventually to the contents of his annual SALN.

“But you never made any conclusion that the buyer (Corona) cannot purchase the properties?” Cuevas asked Henares.

“I did not come to any such conclusion,” she replied.  “I only said it warrants further investigation.”

Henares added that she ordered the assessment of Corona’s tax payments after she first testified before the impeachment court on January 26.

Cuevas was about to object  Henares’ use of Corona’s SALNs as basis for the BIR’s assessment, but private prosecutor Arthur Lim said the examination of SALNs would be necessary should tax evasion cases be filed against erring taxpayers.

Henares asserted that a government official was expected to file “complete and true” entries in his SALN. “That is my understanding,” she said.

“I would think the SALN requires me to completely list all my assets to help the public ascertain whether I enriched myself (in office).  Otherwise, it is a useless exercise,” Henares said.

Last week, the defense panel found an unlikely ally in Senator Ralph Recto of the Liberal Party who quoted a ruling from the Civil Service Commission providing that a public official could make corrections in his SALN if an error was found.

“I move to strike out the answer of the witness,” Cuevas snapped after Henares made her reply.

Cuevas explained that Henares’ statement was her “personal opinion.”

He went on to ask whether the BIR’s investigation of Corona’s tax payments were being conducted without his knowledge.

“May I ask for a waiver from (Cuevas so) I can answer? Because it’s confidential information, Sir,” Henares said, addressing Enrile.

Enrile rephrased the question: “Are you obligated to inform the Chief Justice that you are conducting an investigation bearing on his income tax position? You said it’s confidential meaning, you did not inform him?”

Henares said Corona had been given notice through a letter of authority indicating that “a certain revenue officer” was auditing his ITRs.

“We issued that (letter) after the hearing where I was called here,” she added.

Lim said that during Cuevas’ cross-examination of Henares at the time, she noticed “a lot of discrepancies” in Corona’s SALN and ITRs.

Henares said she was shown copies of Corona’s SALN for 2002 up to 2010 “given… by a media person that were marked supposedly as exhibits.”

She added that the BIR would only have a copy of anyone’s SALN “when we request it from the custodian” of the document.

At this point, Lim interjected that Corona’s SALNs were “tainted by violations as to accuracy, truthfulness and timeliness.”

“That is just your opinion, I’m asking for a factual statement,” Enrile cut him off.

He then ordered Lim to qualify Henares as an expert witness, prompting Cuevas to complain that Henares was not under redirect examination and could not be qualified by a prosecutor.

“Why are we blocking the truth from coming out here,” Lim complained.

Properties not in SALN

Henares eventually told the impeachment court that based on Corona’s SALNs that were encountered by the BIR, Corona failed to include nine properties in the documents since he became an associate justice in 2002.

She said these properties included the seven parcels of land in Marikina City that defense lawyers insisted were already sold to a certain Demetrio Vicente.

Henares added that in 2003, Corona underdeclared his property at La Vista subdivision in Quezon City.

“He reported it as (having a value of) P3 million when it should have been P11 million,” Henares said.

“In 2004, again the same discrepancies. The property in Marikina and another in Diliman were not included in the SALN, as well as the condominium (unit) in The Columns (worth) P27.2 million,” Henares said.

The BIR chief said Corona’s net worth for that period “should be P21.65 million but he reported P7 million.”

Henares went on, saying Corona did not declare  property in Fort Bonifacio in 2005.

In 2007,  Corona’s supposed real net worth was P24 million but he reported only P11 million, Henares said.

In 2008, Henares said Corona’s “net worth discrepancies” ballooned to P13 million, having declared only P12 million instead of P25 million.

Henares said Corona did not declare his true net worth of P52 million in 2009 “because of Bellagio One,” apparently referring to the Chief Justice’s alleged P14-million purchase of a 303.5-million penthouse unit in Taguig City.

She said that during that year, Corona declared a net worth of P14.5 million.

In the year when Corona was appointed the Chief Justice by then President Gloria Macapagal-Arroyo, “his net worth went down because of the La Vista (property) sale of P18 million to Charina.”

Henares said this information was “based on analysis using net worth to assess the tax deficiency of taxpayer.”

“We issued a letter of authority to audit them based on these findings. So we are investigating him further for 1997,” she said.

Cuevas butted in, moving to strike out Henares’ testimony “on all those points.”

“The articles of impeachment show nothing there to predicate this kind of evidence. The Chief Justice is not being impeached for false declaration,” he said.

“You can traverse that in your evidence,” Enrile suggested. “Anyway, let it be.”

Karen Jimeno, one of the defense panel’s spokespersons, said it was still “premature” to determine supposed errors in Corona’s SALNs and ITRs. With a report from Marlon Ramos