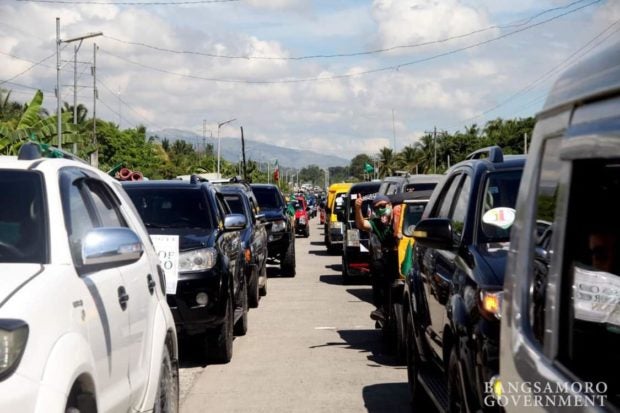 Vehicles line the national highway in Maguindanao province as a peace caravan winds its way from Cotabato City to press for an extension by another three years for Bangsamoro transition. The caravan also commemorated the 53rd anniversary of the Jabidah massacre. CONTRIBUTED PHOTOS

COTABATO CITY—Peace advocates held a caravan on Thursday (March 18) to commemorate the 53rd anniversary of the Jabidah massacre on Corregidor island which triggered a Moro rebellion that erupted into a secessionist war that started in 1972.

The Jabidah massacre referred to the mass killing on March 18, 1968 of Moro recruits in training in Corregidor to infiltrate Sabah under a secret plan given the code name Jabidah. The Moro trainees were killed by Philippine government soldiers after they mutinied upon learning of the real purpose of their training. Accounts varied on the number of dead in the massacre from as few as 11 to as many as 68.

The day was also observed as Bangsamoro Freedom Day, a special nonworking holiday in the autonomous region.

The caravan took off in Cotabato City at 6 a.m., calling attention to the need for three more years of transition to strengthen the foundations of the Bangsamoro Autonomous Region in Muslim Mindanao (BARMM).

“The caravan was aimed to air the Bangsamoro people’s desire to let the transition period go for another three years so both the government and the Moro Islamic Liberation Front comply with their commitments as stated in the Bangsamoro Organic law,” said Hadji Murshid Duma Mascud, chair of the Mindanao Alliance for Peace. 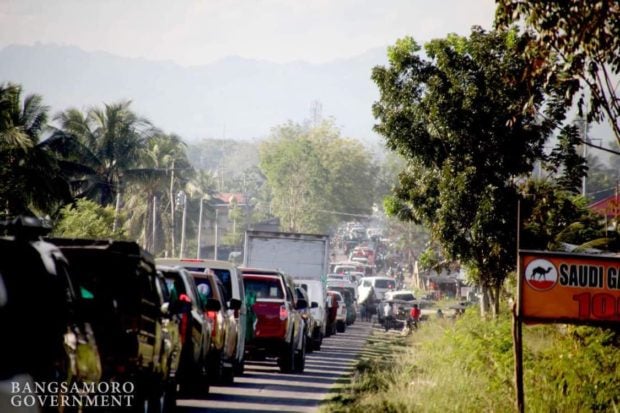 Vehicles line the national highway in Maguindanao province as a peace caravan winds its way from Cotabato City to press for an extension by another three years for Bangsamoro transition. The caravan also commemorated the 53rd anniversary of the Jabidah massacre. CONTRIBUTED PHOTOS

“Let the BARMM leadership perform and make their commitments a reality,” he said, speaking in the vernacular. “Time was not on their side, so we ask Congress to give them ample time and we judge them about their performance after that,” he said.

BARMM was established in 2019 following a plebiscite that ratified the Bangsamoro Organic Act. It is currently governed by the Bangsamoro Transition Authority whose 80 members were appointed by President Rodrigo Duterte.

From Cotabato City, the caravan wound its way through the national highway toward Tacurong City in Sultan Kudarat province and reentered Maguindanao province through Buluan town and on to Kidapawan City in Cotabato province where 63 villages joined the autonomous region in a vote during the 2019 plebiscite.

From Cotabato province, the caravan returned to Cotabato City, traveling at least 288 kilometers.

Earlier, Hashim Manticayan of the League of Bangsamoro Organizations, said the group had been expecting some 6,000 vehicles to join the caravan.

A report from the local news outfit Bangsamoro Media Productions said the head of the caravan entered Cotabato City while its tail was still at Pagalungan town in Maguindanao, some 80 kilometers away.