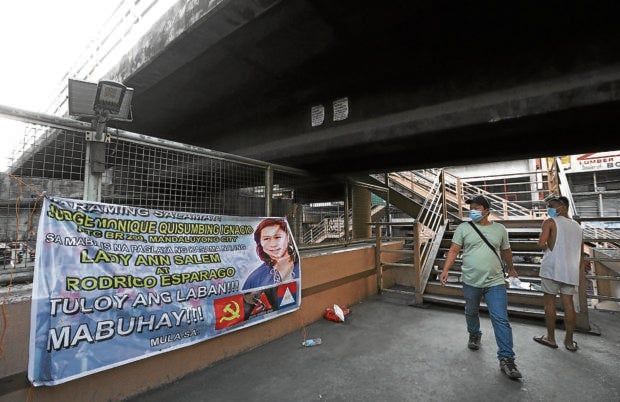 VEILED THREAT A poster displayed on Wednesday on a pedestrian walkway above Edsa in Mandaluyong City purportedly from communist rebels thanks Judge Monique Quisumbing-Ignacio for releasing their “comrades,” Manila Today editor Lady Ann Salem and union organizer Rodrigo Esparago. Lawyers’ groups denounced those responsible for putting up the poster for making a veiled threat against the judge by insinuating she was in league with the insurgents. —LYN RILLON

MANILA, Philippines — Lawmakers on Wednesday denounced threats against Judge Monique Quisumbing-Ignacio of the Mandaluyong City Regional Trial Court (RTC), who they said had been red-tagged for dismissing illegal firearms and explosives possession charges against a journalist and a trade unionist and ordered their release from detention.

Bayan Muna Rep. Ferdinand Gaite posted on his Twitter account a picture of a poster with a message purportedly from the Communist Party of the Philippines (CPP), its armed wing, the New People’s Army (NPA), and the Marxist umbrella group National Democratic Front of the Philippines (NDFP), thanking Ignacio for freeing “our comrades.”

Gaite said that the public display of the poster indicated that even judges were now “under attack.”

Similar posters linking activists and other personages to the communist movement had preceded violent and fatal attacks against them.

“The posting of this [poster] is highly condemnable and a blatant form of Red-tagging not just against activists like us, but also against all those members of the legal system and others who are supposed to provide a mechanism for due process of the accused,” Gaite said in a statement.

Ignacio early last month dismissed the charges against Manila Today editor Lady Ann Salem and labor organizer Rodrigo Esparago, ruling that the evidence against the two were inadmissible after declaring that the search warrant used by law enforcers were “null and void.”

“Thank you very much Judge Monique Quisumbing- Ignacio, RTC Branch 209, Mandaluyong City, for the swift release of our comrades Lady Ann Salem and Rodrigo Esparago. Onward with the struggle! Long live!” the poster’s message reads in Filipino. At the bottom of the poster were the logos of the CPP, NPA and NDFP.

The poster was hung on the elevated walkway near the Edsa-Crossing intersection in Mandaluyong and was still there as of Wednesday afternoon.

“Clearly, this is an attempt to intimidate our courts into cooperation,” said Gaite, who has himself been linked to the communist underground.

Salem and Esparago were among seven people who were arrested on Dec. 10, 2020, in separate police operations in Metro Manila. Ignacio ordered the two released from detention on March 5.

House Deputy Minority Leader and Bayan Muna Rep. Carlos Isagani Zarate said “antidemocratic forces” were responsible for the threat against the judge and urged the Supreme Court “to publicly condemn” and investigate the incident.

He also warned that the attacks against activists and the opposition would worsen if the high court ignored the possible accountability of other judges who had issued search warrants that resulted in extrajudicial killings.

He was referring to the dozens of such warrants used against activists in the Southern Tagalog region that resulted in the killing of nine of them.

Gaite said the Makabayan bloc would file a resolution for the “full investigation” of the Red-tagging of activists and lawyers. 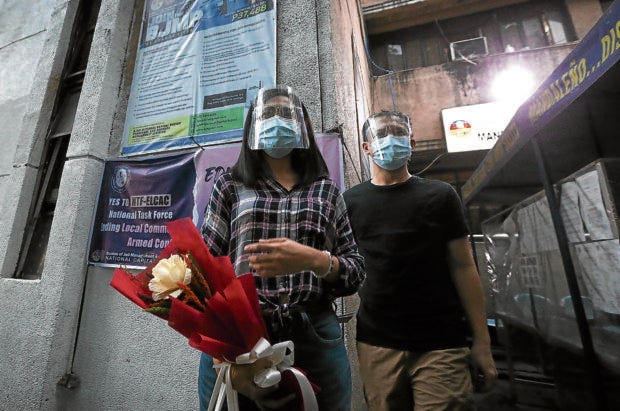 CASE JUNKED Journalist Lady Ann Salem and trade unionist Rodrigo Esparago leave the Mandaluyong City Jail on March 5 after Judge Monique Quisumbing-Ignacio affirmed the dismissal of the charges filed against them for illegal possession of firearms and explosives. —LYN RILLON

He requested the Metropolitan Manila Development Authority, the Mandaluyong City government or other public or private entities with video monitors in the area where the poster was displayed to provide footage to identify those responsible for putting it up and eventually lead to those who ordered “this dastardly and dangerous act.”

In a statement, Manila Today said the “veiled threat” against Ignacio meant “continuing threat against the safety and security of Salem and Esparago.”

It said Ignacio and other judges were being warned not to “dare probe and expose the truth in the police modus operandi of using search warrants to plant evidence and fabricate charges” against government critics.

The high court should also review the rules on the issuance of warrants by lower courts.

He proposed that the high court get all records, including transcripts of hearings on search warrant applications, and order judges to make these available to the accused.

The Office of the Court Administrator, Colmenares said, ought to publish a list of search warrants denied by some courts but granted by other courts to preempt forum shopping by the police who may run to their “favorite judges” to get warrants.

He said it would just be a matter of time before members of the bench who had decided cases unfavorable to the government would also be included in a list of targets for attacks.

Edre Olalia, president of the National Union of Peoples’ Lawyers (NUPL), said the poster had “a very chilling effect on judges who would stand up for truth” and was “an open attack on the independence of the judiciary.”

“This demonization of the judge who simply based her decision on facts, evidence, procedure and the law and Constitution once again proves that [the Red-taggers] do not have any fiber of decency, reason and fairness, let alone common sense,” Olalia said.

The Public Interest Law Center also demanded an investigation by the Supreme Court, saying the “underhanded threat” against Ignacio would “undermine the independence of all judges and the courts handling similar cases.”

The Commission on Human Rights (CHR) on Wednesday urged the government to “act with resolve” against the increasing attacks on the judiciary.

In a statement, CHR spokesperson Jacqueline de Guia said Ignacio “was being attacked in connection [with] her decisions involving prosecutorial discretion and exercise of due process.”

This was in violation of Article 18 of the UN Basic Principles on the Role of Lawyers, which states that members of the legal profession “shall not be identified with their clients or their clients’ causes as a result of discharging their functions.”

“By doing so, we contribute in the direct deprivation of the people’s access to functioning and effective judiciary,” De Guia warned.