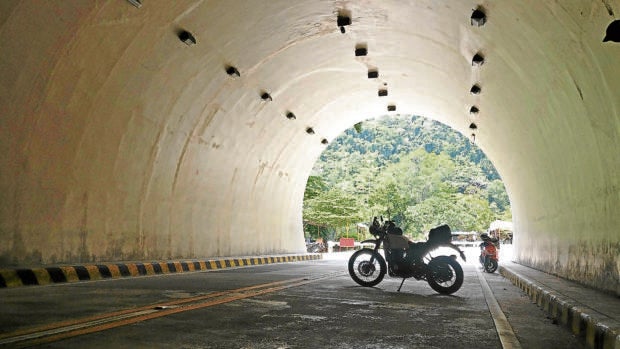 TUNNEL VIEW The Kaybiang Tunnel on Mt. Pico de Loro in the provincial boundaries of Cavite and Batangas is a popular stop among cyclists, motorcycle riders and families, especially during weekend trips. —REM ZAMORA

Starting March 19, people will be prevented from lingering near the popular Kaybiang Tunnel in Cavite province, as Gov. Juanito Victor Remulla declared the area a “strictly no tourism zone.”

Remulla, in a post on his Facebook page on Wednesday, said he had been receiving reports that tourists visiting the tunnel along the Nasugbu (Batangas)-Ternate (Cavite) highway on Mt. Pico de Loro were often the cause of traffic gridlocks and trash in the area.

“All day long, thousands of bikes, motorcycles and vehicles are parked there as people eat, mingle and loiter, and stop to take selfies and photos with the tunnel as background,” Remulla said in Filipino.

“The result? Nonstop traffic and bottleneck from the tunnel’s entrance up to its exit,” he added.

Remulla said regulating the number of people in the area was also to prevent the spread of the coronavirus, which might be transmitted through crowding at the vicinity of the tunnel.

He said the new rules would include prohibitions on parking, eating, picture-taking and loitering. Motorists are also asked not to blow their vehicles’ horns inside the tunnel. Cyclists will also be prevented from using the tunnel “for leisure purposes.”

“I don’t want to spoil anyone’s fun. But it’s my responsibility to ensure that traffic is flowing smoothly and that law and order is observed in our roads,” Remulla said.

Police checkpoints, he said, will be put up along the highway spanning the towns of Tanza, Naic, Marangondon and Ternate to implement his order.

The 300-meter Kaybiang Tunnel, opened in 2013, connects Ternate in Cavite to Nasugbu in Batangas. It shortens travel time from Metro Manila to Nasugbu from the usual four hours via Tagaytay City to just a little over an hour.

Remulla said he was alarmed by the 286 new COVID-19 cases recorded in Cavite on March 16, which he attributed to the daily trips of his provincemates to Metro Manila for work.

“Health protocols in Metro Manila have tightened again but rules are still flexible in Cavite. We also have to balance the impact of COVID on the local economy,” he said.