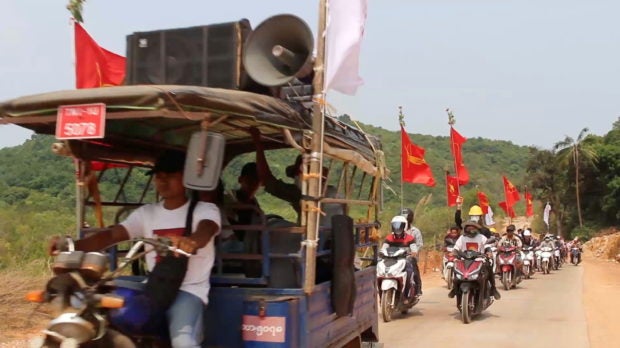 Protesters fly the flags of the National League for Democracy (NLD) as they ride their motorcycles in Dawei district, Myanmar March 16, 2021, in this still image obtained from a video. Courtesy of Dawei Watch/ via REUTERS

Myanmar’s most powerful Buddhist monks’ association called on the junta to end violence against protesters and accused an “armed minority” of torture and killing innocent civilians since last month’s coup, media said on Wednesday.

In its most forthright condemnation of the military’s bloody crackdown on pro-democracy demonstrations, the government-appointed organization also said in a draft statement its members intended to halt activities in an apparent protest.

The State Sangha Maha Nayaka Committee planned to release a final statement after consulting the religious affairs minister on Thursday, the Myanmar Now news portal said, citing a monk who attended a meeting of the committee.

Monks have a long history of activism in Myanmar and were at the forefront of a 2007 “Saffron Revolution” against military rule, an uprising which, though suppressed, helped usher in democratic reforms.

Mahana members could not immediately be reached for comment but their reported stance would signal a significant rift between authorities and a group that usually works closely with the government.

Myanmar has been in turmoil since the military ousted Aung San Suu Kyi’s elected government on Feb. 1, detaining her and members of her party, drawing wide international condemnation.

More than 180 protesters have been killed as security forces try to crush a wave of demonstrations, says activist group the Assistance Association for Political Prisoners.

Security forces killed a man at a demonstration in Yangon overnight, the victim’s brother said. In the morning, protesters in one neighborhood left rows of coconuts on a road, representing people, with a sign saying: “Give back our future!”

While the security forces have focused on stamping out dissent in the main city of Yangon, small demonstrations erupt elsewhere.

Several hundred people gathered with protest signs in Demoso in the east, Pathein in the Irrawaddy river delta, and Dawei in the south on Wednesday, pictures on social media showed.

Residents of the second city of Mandalay and the central town of Monywa also reported protests.

A total mobile internet shutdown made it difficult for protesters to communicate and verify information. Very few people in Myanmar have access to Wi-Fi.

“We have to use old ways to communicate,” Chit Chit Win, a member of a women’s protest group, told Reuters from Dawei.

“We use a guerrilla protest system. We tell people to disperse if security forces come…We’re avoiding confrontation, but doing what we can.”

A junta spokesman did not answer telephone calls seeking comment.

Parts of Yangon have been placed under martial law and thousands of residents have fled the industrial suburb of Hlaingthaya where security forces killed 40 people on Sunday and Chinese-financed factories were set ablaze. 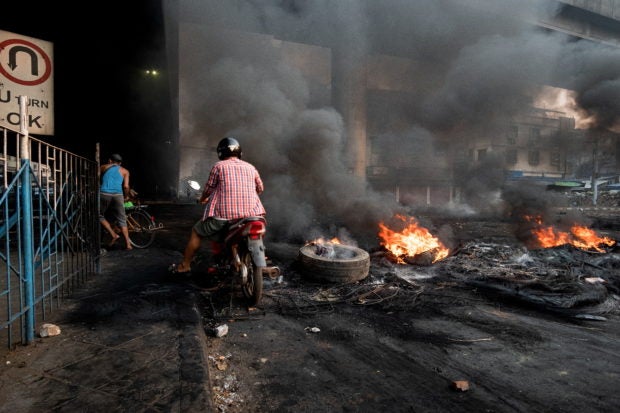 “Here is like a war zone, they are shooting everywhere,” a labor organizer in the area told Reuters, adding that most residents were too frightened to go outside.

Workers said a dispute over pay at a Chinese-owned factory in the industrial zone turned violent on Tuesday after the owner called the security forces, who shot dead a labor leader and then at least four people.

Myanmar Now said six people were killed. Two doctors told Reuters there were still wounded people there, but the army had sealed off the area.

Chinese state media have warned that Beijing could take unspecified action if there are further attacks on Chinese-owned businesses.

Many people in Myanmar believe Beijing is backing the military. Unlike Western powers, China has not condemned the coup and, along with Russia, has prevented the U.N. Security Council from denouncing the military’s actions.

France said the European Union would approve sanctions against those behind the coup next Monday.

The junta charged with treason an emissary of ousted lawmakers attempting to re-establish the civilian government. Sasa, who goes by a single name and is abroad, issued a statement saying he was proud to have been charged and the generals committed treason every day.

The Open Society Foundations, a philanthropic organization founded by billionaire George Soros, called on Tuesday for the immediate release of a staff member held in Myanmar and said allegations of financial misconduct were false.

State media have said authorities had detained an official from the Open Society Myanmar and were looking for 11 other employees on suspicion of passing funds to opponents of military rule.

The army said it took power after its accusations of fraud in a November 8 election won by Suu Kyi’s National League for Democracy (NLD) were rejected by the electoral commission. It has promised to hold a new election but has not set a date.

Suu Kyi, 75, has been detained since the coup and faces various charges including illegally importing walkie-talkie radios and infringing coronavirus protocols.