MANILA, Philippines — People’s Television Network (PTV) on Wednesday apologized for a tweet that mentioned the trending hashtag #DutertePalpak alongside the name of President Rodrigo Duterte, a gaffe that had put the state-run network in a fret and social media into a frenzy.

In a statement, PTV said that the erroneous post was a “result of predictive systems in the text entry phase and a failure to adequately review and screen the message that actually got posted.”

Because of this inadvertence, the personnel behind the erroneous post will face disciplinary actions, the network said.

“PTV New Media deeply regrets the error and takes full responsibility for the oversight. The management will certainly institute disciplinary actions against members of the social media team who are behind the erroneous posting,” it added. 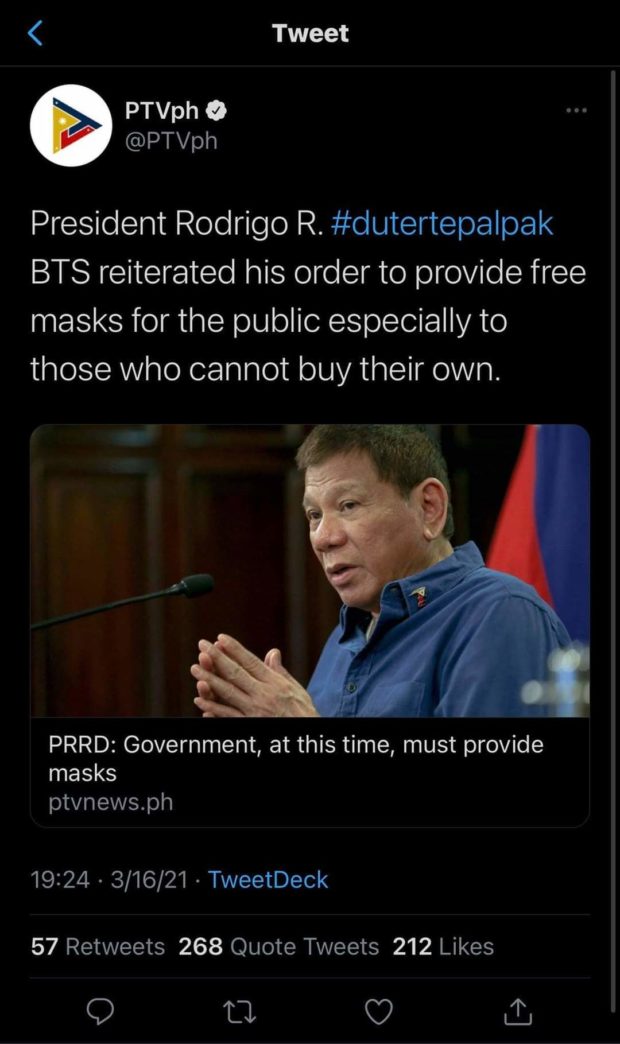 On Tuesday night, PTV’s official Twitter account shared a story on Duterte reiterating his directive to give the public free face masks. However, the post replaced the President’s surname with the hashtag #DutertePalpak.

The original tweet was taken down a few minutes after it was posted, but only after eagle-eyed netizens have taken screenshots of the slip and shared on social media.

The #DutertePalpak hashtag was used by critics to mark a year since parts of the country were placed on community quarantine due to the COVID-19 pandemic.