Jabs in isolation: How a remote Portuguese island dodged COVID-19 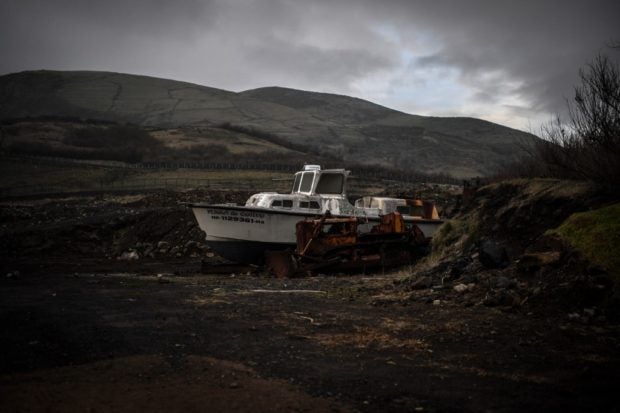 The abandoned vessel “Perola do Corvo” (Corvo’s Pearl) is pictured on land on Corvo Island in Azores on March 10, 2021. With occasional shortages of petrol and fruit, Corvo is no stranger to the pitfalls of isolation — but its remoteness has had one major advantage: the smallest island of the Azores archipelago off the Portuguese coast has been spared from the pandemic sweeping the rest of the globe. Photo by PATRICIA DE MELO MOREIRA / AFP

AZORES, Portugal — Battered by North Atlantic weather and sometimes starved of vital supplies, the tiny Portuguese island of Corvo has a crucial advantage in the fight against the pandemic: its remoteness.

Lying hundreds of kilometers from continental Europe, the smallest island in the Azores — dominated by a volcanic crater and dotted with lakes — appears to have escaped unscathed.

By Saturday, almost its entire 400-strong population had been vaccinated, its only doctor rejoicing as people lined up at a sports complex for their second Pfizer dose.

“We’re already living a life that’s very close to normal,” beamed Antonio Salgado, checking names off his list. “And now it will be even more so!”

The 62-year-old physician arrived on Corvo less than a year ago but he is already accustomed to occasional shortages of fruit and fuel — and he has learnt to make homemade yoghurt.

“This makes up for all the difficulties we experience daily,” he said.

Portugal decided to fully vaccinate the island without moving through priority groups.

Local health official Clelio Meneses explained that the number of jabs needed to immunize Corvo would not affect rollouts elsewhere in the Azores.

“The only responsible thing to do was to vaccinate the whole population in one go to create an immunized territory,” he said.

With only one ventilator on the island and no hospital beds at all, an outbreak on Corvo could have been devastating.

“We were very afraid that someone would come and contaminate all of us, like off a boat,” said Goreti Melo, one of the island’s two nurses.

“The spread would’ve been disastrous and very rapid,” said mayor Jose Manuel Silva, who recalled that some of his constituents wanted the island to be closed off.

“We only have one bakery so inevitably we all go to the same places.”

Mainland Portugal has battled one of the world’s most persistent outbreaks, imposing strict confinement measures as more than 16,000 people have died from more than 800,000 infections.

But on Corvo there has been just a single Covid case — a local who ventured to the continent for the Christmas holidays.

People on the 17-square-kilometer island can meet in cafes and restaurants to compare vaccine side effects in person.

However, the island has few sources of income — a small fleet of fishing boats and a herd of about 1,000 cattle account for its farming economy.

Tourism provides a livelihood for some, but the pandemic has killed that revenue stream and left the island especially dependent on outside help.

Local teacher Elisabete Barradas, who says she feels “very privileged” after receiving her second vaccine dose, explained that the island had felt like “a capsule” for much of the pandemic.

But she said residents were now watching how it played out in the rest of the world “with a lot of concern”.