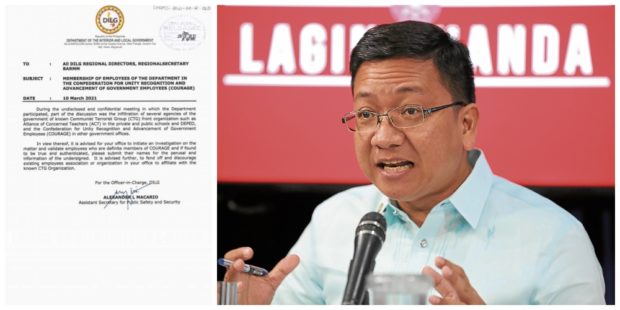 ‘NOT RED-TAGGING’ Undersecretary Jonathan Malaya says the Department of the Interior and Local Government memo (above, left) seeking out members of progressive groups in the government is not meant to “Red-tag” these state employees. —INQUIRER PHOTO

MANILA, Philippines — The home affairs office said on Monday there was nothing sinister in the memorandum that sought to identify members of progressive groups in the government.

Bernardo Florece Jr., officer in charge of the Department of the Interior and Local Government (DILG), said it was the agency’s obligation to check its employees’ affiliations based on civil service guidelines.

DILG spokesperson Jonathan Malaya said that once identified, these employees in the department who are members of progressive organizations will only be encouraged to “disaffiliate” themselves from those groups.

The DILG, on March 10, issued a memorandum directing its regional directors to identify who among its employees are members of Confederation for Unity, Recognition and Advancement of Government Employees (Courage), a network of workers’ unions in the government, and Alliance of Concerned Teachers (ACT), the union of public schoolteachers.

In a statement on Monday, Florece accused Bayan Muna Rep. Ferdinand Gaite of “spreading fake news” against the DILG.

“It is not true that the memorandum … ‘Red-tagged’ the group Courage and that a hit list is now being prepared by the government,” he said.

Florece pointed out that Jose Maria Sison himself, the founding chair of the Communist Party of the Philippines (CPP), had long ago identified front organizations of the CPP and its armed wing, the New People’s Army.

He also said the National Intelligence Coordinating Agency had issued a report stating that Makabayang Kawaning Pilipino, an underground organization said to be advocating armed struggle, had infiltrated Courage.

“It is but the legal and moral obligation of this department to investigate if there are employees within our ranks seeking shelter in the very system they wish to destroy. It is our sworn obligation to determine if the organization has been infiltrated and if our employees are being recruited and exploited,” Florece said.

“While the department recognizes our employees’ constitutional right to join associations, they should bear in mind that this right is not absolute,” he added.

Florece cited Republic Act No. 6713, the Code of Conduct and Ethical Standards for Public Officials and Employees, which states that “civil servants shall at all times be loyal to the Republic and to the Filipino people, … uphold the Constitution and put loyalty to country above loyalty to persons or party.”

Malaya said the “characterization” of the memo by progressive lawmakers “is wrong.”

“It’s not Red-tagging and there’s no hit list,” he said.

Asked if DILG employees found to be affiliated with Courage would be removed from the agency, Malaya said, “No. We will just encourage them to disaffiliate with Courage as stated in the Macario memo.”

But ACT Teachers Rep. France Castro slammed the “profiling and terrorist-tagging” of her group and Courage.

“We demand [that] the DILG recall the memorandum and stop profiling our teachers and government employees,” she said.

In its statement, ACT clarified that Sison never named the organization as a front of the communist insurgency.

ACT secretary general Raymond Basilio said anyone “with basic comprehension skills” could determine that Sison was actually differentiating groups like ACT and Courage.

“This is even more ridiculous considering how ACT is a government-recognized union of public school teachers in all 17 regions—the sole and exclusive negotiating agent in five and duly registered in the remaining 12 regions,” Basilio said.

Gaite said the arrest and imprisonment of union leaders and the deaths of activists in the March 7 raids in Calabarzon (Cavite, Laguna, Batangas, Rizal and Quezon) region were “not just imagined.”

“This ongoing bloody campaign against progressives is indeed as real as it gets. This is not an imagination, this is a reality now being faced by activists,” he said.

Other groups weighed in, with Nagkaisa coalition saying: “The right of workers to self-organization is an inherent right.”

“The supposed protector of trade union rights in the public sector has become its own tormentor,” she said.