China ‘very concerned’ for safety of citizens in Myanmar 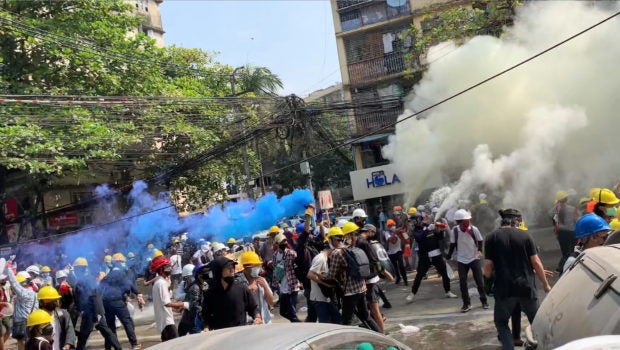 (FILE PHOTO) Protesters set off smoke grenades to block the view from snipers in Sanchaung, Yangon, Myanmar March 3, 2021, in this still image from a video obtained by Reuters. Video obtained by REUTERS

Beijing, China — Beijing on Monday said it was “very concerned” for the safety of its citizens in Myanmar after Chinese factories were attacked amid a bloody crackdown on pro-democracy protests in Yangon.

Martial law has been declared in the townships where the factories were located. The Chinese Embassy in Yangon has accused protesters of attacking the factories.

Many in Myanmar’s pro-democracy movement believe China has sided with the army since a February 1 coup took out the civilian government of Aung San Suu Kyi.

China is a key investor in Myanmar and has bet big on its strategic importance to its Belt and Road Initiative, a sweeping infrastructure project.

Describing the incident as “nasty”, foreign ministry spokesman Zhao Lijian urged Myanmar to take actions to “resolutely avoid a recurrence of such incidents”.

China “is very concerned about the impact on the safety of Chinese institutions and personnel… the actions of these outlaws are not in the interests of Myanmar and its people”, he said.

Zhao said Myanmar security forces had reinforced the area around the factories.

“China will continue to urge Myanmar to take concrete steps to stop all acts of violence and bring the perpetrators to justice and ensure the safety of Chinese people’s life and property,” he told reporters in Beijing.

After years of testy relations between a wary Myanmar public and Chinese investors, Beijing was confident it had secured the Southeast Asian nation as a partner in its strategic ambitions for Asia.

A natural gas pipeline to a mega-port off Rakhine state is set to give China access to the Indian Ocean.

But a social media campaign by Myanmar’s protest movement has urged citizens to rally against the Chinese pipeline, which crosses the country.

A widespread popular campaign against Chinese interests in the country is likely to rattle Beijing.

The Myanmar public has pushed back at Chinese investments before, with lingering suspicions over its aims and the conditions under which it employs local workers in Chinese factories.

China has called for a “de-escalation” of the situation in Myanmar, which has left more than 100 protesters dead in several weeks of unrest.