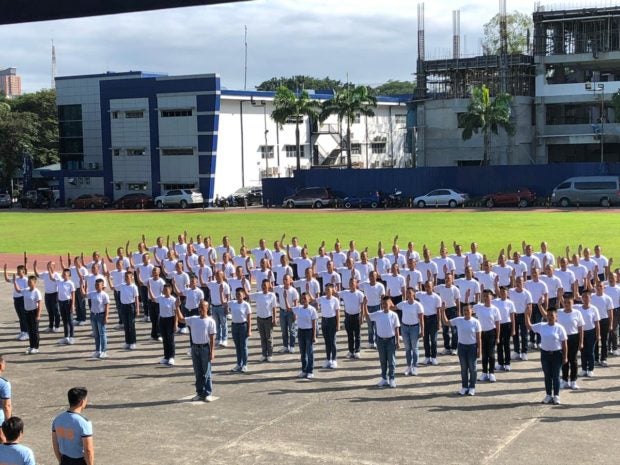 MANILA, Philippines — A bill that will lower the minimum height requirement for police and other uniformed personnel is now only awaiting the signature of President Rodrigo Duterte.

On Monday, the Senate and the House of Representatives adopted the bicameral conference committee report on the disagreeing provisions of Senate Bill No. 1563 and House Bill No. 8261 in their respective plenary sessions.

“In the eyes of Our Creator, we are created equal. However, in the eyes of man, we are measured based on our appearance, capabilities and talents. In the provisions of the law, we seek the furtherance of equity,” Senator Ronald “Bato” dela Rosa, chair of the Senate public order committee, said in sponsoring the report.

(We are not lowering the standards of the requirements to serve as police officers, firefighters, jail and correction officers. What we are aiming for is to give a chance to those who may not be blessed with height.)

The bicam’s reconciled version of the bill “remain[s] true to the objective” of the measures passed in the Senate,” according to Dela Rosa.

“The PNP supported the Senate version and submitted their written objection on the version of the House of Representatives,” he added.

Both versions of the bill seeks amend the PNP charter that originally set the minimum height requirement at 1.62 meters for male and 1.57 meters for female applicants to the national police force, Bureau of Fire Protection (BFP), Bureau of Jail Management and Penology (BJMP), and Bureau of Corrections (BuCor).

However, the House version excludes PNPA applicants from the measure, retaining the current height requirement for its cadets at 1.62 meters for men and 1.57 meters for women.

“The PNP stated that there is no cogent reason for cadets of the PNPA to be treated differently from other uniformed members of the PNP with respect to height requirements since PNPA graduates perform the same function as other Police Commissioned Officers,” Dela Rosa went on.

The bicam version of the bill, according to the senator, also adopted the Senate version on the retention of the automatic waiver for members of the cultural minorities and indigenous peoples.

“The National Commission on Indigenous Peoples also put forward that the retention of said waiver is a significant step to address discrimination in the admission or appointment of uniformed personnel,” he said.

According to Dela Rosa, the said bill would be a “key in opening the gates of public service.”

“We welcome those who may be less in height but possess the biggest of hearts for the service of the country,” he said.

“Courage, dedication and willingness to sacrifice one’s life for the service of the others cannot be measured by height nor by any physical characteristics given by the unseen hand of our Supreme Being,” he added.