Guevarra: Hard to link Duterte with high number of slain lawyers since 2016

MANILA, Philippines — For Justice Secretary Menardo Guevarra, it would be tough to establish a link between President Rodrigo Duterte and the high number of lawyers killed during his term.

According to the Department of Justice (DOJ) chief, there are many possible causes for the deaths of the lawyers.

Guevarra’s statement comes as reports indicate that at least 60 lawyers have been killed since Duterte took the presidency in 2016 – higher than the combined total of legal profession members slain during previous administrations.

“Maraming possible causes kung bakit nagkakaroon ng deaths among members in the legal profession. So, parang it’s so difficult for me to relate iyang number of deaths and make a comparison depende kung sino ang presidente ng Pilipinas,” Guevarra said in an online Palace briefing he joined on Monday.

(There are many possible causes why there are deaths among the legal profession. It’s difficult for me to relate the number of deaths and make a comparison depending on who is the Philippine president.) 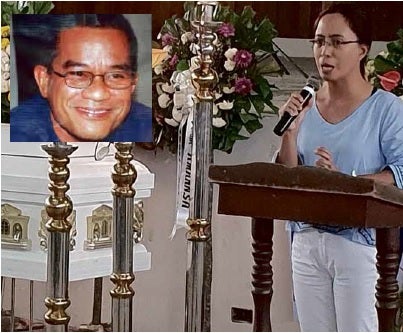 COWARDS “They could not silence him with threats and bribes so they killed him in the most cowardly fashion—with three bullets,” Clarissa Ramos, widow of slain lawyer Benjamin Ramos Jr. (inset), says at the necrological services for her husband in November 2018. NESTOR P. BURGOS JR./INQUIRER FILE PHOTO

“The President himself is a lawyer. Do you think he will have a policy na parang or will be something that will put his fellow members of the legal profession in personal jeopardy or something to that effect? I don’t think so.”

“Nangyayari iyan because of circumstances prevailing, not because of whoever is the head of the present administration,” he added.

(That happens because of the circumstances prevailing, not because of whoever is the head of the present administration.)

Guevarra said being a lawyer has always been a dangerous profession, citing the nature of some cases they handle.

“In the exercise of their profession, many lawyers are representing clients, even before, who are involved in very controversial cases,” he noted.

(There are drug cases, terrorism cases, corruption cases, election cases, things like that, and the nature of those really exposes lawyers to some personal risk or safety or issues of security. That really happens.)

In January, the Supreme Court and DOJ have taken steps to separately conduct an inventory of all cases on lawyers killed in the country.