Americans brace for a rare and creepy billion-bug invasion 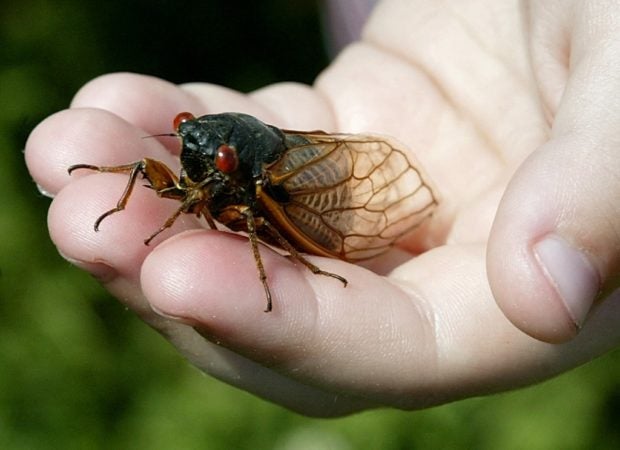 In this file photo taken on May 14, 2004, a child holds up a cicada in Alexandria, Virginia. They’ve been lurking underground for almost twenty years, waiting for the right moment to emerge. This is not a horror movie or an ancient legend: billions of cicadas will soon invade part of the United States, including the capital Washington. The phenomenon is rare and spectacular. Every 17 years, these “periodic” cicadas come out en masse into the open air to mate, lay eggs… and then die. Photo by STEPHEN JAFFE / AFP

WASHINGTON — They have spent close to two decades buried underground, waiting for the right moment to emerge — before pouring forth by the billions, filling the air with an ear-piercing racket and covering walls and floors from the US east coast to the Midwest.

No, it’s not a horror film — well, not exactly — but rather the regular, if very infrequent, arrival of the cicada, a thumb-sized insect with alarmingly wide-set eyes and membranous wings.

Their unnerving arrival is as spectacular as it is rare. Every 17 years, these “periodical” cicadas emerge just long enough to mate, lay eggs… and die.

“It was like science fiction,” said Melanie Asher, who lives in the Washington suburb of Bethesda, Maryland and who clearly remembers the insect invasion that hit the area in 1987, when she was a child.

“The floors were covered with cicadas just dropping dead,” she said.

“I’m not scared of bugs (but) it was freaky — it was very much otherworldly.”

This year the cicadas are expected to arrive in May, or possibly a few weeks earlier in some regions, covering parts of a vast area from Washington in the east to Illinois in the Midwest to Georgia in the south.

“They were just flying everywhere,” said Merin, who works in communications.

They were hard to escape, she said. When driving, “they’d be hitting your windshield. You couldn’t really drive with the windows open.”

What else should people be bracing for during the few long weeks of the cicada visitation? The large insects getting caught in your hair, some residents recall… The crunching sound made when you walk on countless cicada cadavers…

And then there is the deafening racket, as Peter Peart clearly recalls.

“It’s a cacophony,” said the 66-year-old retiree, who lives in Washington’s Columbia Heights neighborhood, where he witnessed the cicada invasions of both 1987 and 2004.

“It is loud, and it is nonstop. It’s incessant.”

But it’s not the end of the world, he adds.

He admits to being amused by the whole “amazing” phenomenon, and is eager to see the expressions on the faces of people who have never been through a cicada invasion.

“It’s really quite unique,” said John Cooley, an assistant professor of ecology and evolutionary biology at the University of Connecticut in Hartford.

The cicadas, which do no real damage other than perhaps to people’s nerves and eardrums, “just have a 17-year life cycle.”

That life cycle — both long and yet mostly out of sight — sticks to a strict routine, he says.

“Once the soil reaches a certain temperature, about 62 Fahrenheit (17 degrees centigrade) on an evening that may be a little bit damp but not excessively rainy, nymphs will start coming out of the ground and then molt to adulthood.

“Then they’ll hang around in the vegetation not doing much for about a week, and then they’ll start doing” what Cooley coyly calls “the adult behaviors.”

For “this is what this is all about,” he adds: reproduction.

“That noise that you’ll hear is the male — only the males — making calls to attract female responses.

“And then once a male and female are paired up, they mate, the female lay their eggs, then they die” shortly thereafter.

The eggs, laid in tree trunks or branches, hatch six to eight weeks later. Ant-like juveniles then drop to the ground, where they burrow in for 17 years, drawing sustenance from sap in tree roots, before the unique cycle starts again.

The generally recognized estimate is that there will be “billions and even maybe trillions” of cicadas this spring, Cooley says.

By emerging in huge numbers, and with many years separating each appearance, they are able to overwhelm predators.

It is an effective survival strategy. For if squirrels, birds, raccoons and dogs enjoy feasting on the crunchy bugs for days, countless more cicadas will survive.

Meanwhile, residents of the US capital are trying to be philosophical about the fact that the insect invasion is set to coincide with the return of beautiful spring weather — something people have awaited with particular impatience after a year stuck mostly indoors due to pandemic-related restrictions.

Going for a stroll or heading to a park for a picnic might not seem so appetizing in the middle of a swarm of raucously chirping bugs.

“It’s a little cruel,” Melody Merin said with a laugh.

“It’s a little bit like somebody who has a very twisted sense of humor.”