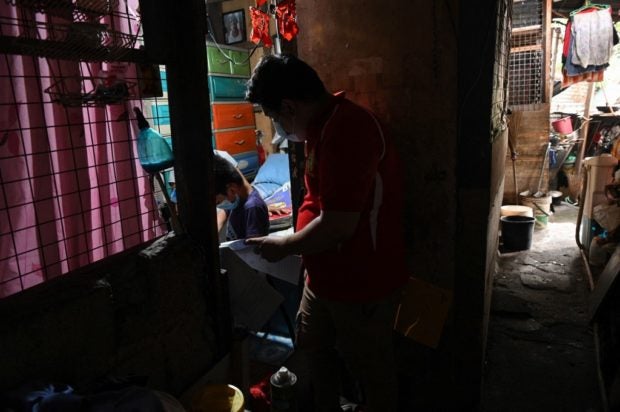 In this photo taken on February 11, 2021, student Andrix Serrano (C) reviews lessons with his teacher Kristhean Navales (R) at a home in an informal settlers area in Quezon City, suburban Manila. A year after the coronavirus pandemic sent the Philippines into a months-long lockdown, classrooms across the country remain empty and children are still stuck at home. Photo by Ted ALJIBE / AFP

MANILA, Philippines — Andrix Serrano studies alone inside a Manila slum shack he shares with his street-sweeper grandmother. Like many in his fourth-grade class, he has no internet for his shuttered school’s online lessons.

A year after the coronavirus pandemic sent the Philippines into a months-long lockdown, classrooms across the country remain empty and children are still stuck at home.

Fearing youngsters could catch the virus and infect elderly relatives, President Rodrigo Duterte refuses to lift the restrictions until vaccinations are widespread — something that could take years.

A “blended learning” program involving online classes, printed materials and lessons broadcast on television and social media was launched in October, four months after the school year was supposed to start.

It has been plagued with problems: most students in the Philippines don’t have a computer or internet at home.

“I can’t do it, it’s difficult for me,” said Serrano, sitting in his shack next to a polluted river, a photo of him wearing a class graduation gown hanging on the wall behind him.

“It’s fun in school. It’s easier to learn there.”

The nine-year-old’s science teacher, Kristhean Navales, runs a class over Facebook Messenger but less than half of his 43 students have access to a device.

Using heart and thumb emojis, those that can join signal if they have understood or have questions about the lesson Navales has pasted into the group chat.

They don’t always have internet and what data they have isn’t enough for video calls.

“Subjects that require hands-on activity like science, mathematics — how can we do that in the messenger?” Navales asked.

The rest of his students rely on printed materials that have been simplified by the school to ease the burden on children.

After class, Navales visits Serrano and other students who are struggling to keep up — and delivers bags of vegetables to their families.

He worries that his students are not learning much and he’s frustrated by the government’s failure to prepare schools for a return to in-person classes.

“Their right to education should not be hampered by this pandemic,” he told AFP.

Fifteen-year-olds in the Philippines were already at or near the bottom in reading, mathematics and science, according to OECD data.

But since the school shutdown enrollments have dropped by more than a million, the UN’s children agency estimates.

Experts worry many students are falling even further behind and those that have dropped out might not come back to the classroom.

“Covid is affecting all school systems in the world, but here it is even worse,” said Isy Faingold, Unicef’s education chief in the Philippines.

A stay-at-home order for children under 15 makes it even more dangerous.

Many parents have flouted the order, allowing their children to play in parks or on the street. But it’s taking a toll on their development.

The rule was briefly lifted for some children in January but Duterte quickly reimposed it, telling them to watch television instead.

Plans for a limited reopening of schools in January were scrapped after a more infectious coronavirus variant emerged.

Data show the virus largely spares children, but it remains unclear how much they transmit.

Duterte’s own economic managers have warned of “permanent scarring” to children that could hurt their earning potential if home-based learning is prolonged.

“Not being able to see and relate physically face to face with their classmates and friends has had a tremendous impact on the emotional development of children,” said clinical child psychologist Maria Lourdes Carandang.

She has seen “alarming” levels of depression and anxiety.

Parents and grandparents are also feeling the strain.

Every week Aida Castillo, 65, picks up printed lessons from school for her five grandchildren and supervises their study while their parents work.

Only the eldest has access to a smartphone for online classes when their mother comes home.

“It’s like you’re the one teaching them and what if you don’t know about (the subject)?” said Castillo, who left school after sixth grade.

She wants face-to-face classes to resume, but only “if the pandemic is over” — something that seems even more distant as infections soar again.

‘The rich have everything’

School closures have affected all students, but the country’s devastating rich-poor divide has made the impact unequal.

Parents with money can hire tutors for their children — or even a live-in teacher.

For poor students like Maria Fe Morallos, who lives in a smoky charcoal-making neighborhood, such opportunities don’t exist.

The tenth grade student can’t afford a smartphone so she sits under a naked lightbulb writing answers on worksheets, skipping lessons she doesn’t understand.

“The rich have everything they need,” said Morallos.

“It’s hard for the poor because we don’t have a gadget or the money to buy it.”