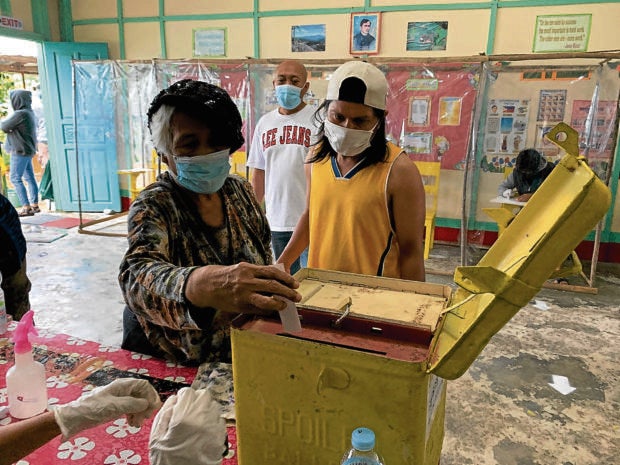 POLLING AMID PANDEMIC At 50 to 60 percent, the voter turnout was still considered “high” for Saturday’s electoral exercise that decides whether Palawan will be split into three provinces. Residents of Barangay Panacan Uno, for example, went out to cast their vote despite the rain and the raging pandemic. —ROMAR MIRANDA

NARRA, Palawan, Philippines — The Commission on Elections (Comelec) declared on Saturday that it successfully conducted the plebiscite on the law dividing Palawan into three provinces, the first electoral process in the country since the onset of the global COVID-19 pandemic.

Although the 50 to 60 percent voter turnout was low compared to the national average of 75 percent, it was still higher than the initial estimate of 47 percent and it gave Comelec a chance to test the new systems they developed in case they had to hold the 2022 national elections in pandemic conditions.

“The turnout is high considering the rain and concerns with COVID-19. By most of our parameters, the plebiscite was successful here in Palawan,” James Jimenez, spokesperson for the Comelec, said on Saturday afternoon in a phone interview.

Under the “new normal” voting process introduced by the poll body, the temperature of each voter was taken and they had to fill up health declaration forms that were submitted to local officials clad in personal protective equipment.

Those who registered temperatures of 37.5 degrees Celsius or higher, or those who exhibited symptoms, or answered “yes” to any of the questions in the health declaration form, were told to vote inside an isolated polling place in each village.

Only five individuals were allowed in each precinct to maintain strict physical distancing while utility workers were also assigned in every polling center to sanitize the booths after each use.

Rural health workers, instead of the usual teachers, were tasked to man the isolation polling precincts. They were previously trained by Comelec officials on the election process.

“According to reports, all polling places opened on time, with the exception of Kalayaan where the opening of polls has been delayed because of the late arrival of election supplies and paraphernalia,” Jimenez added.

A total of 2,956 clustered precincts opened at 7 a.m. throughout 23 Palawan towns, with two established precincts at Kalayaan town in the West Philippine Sea opening late because of huge waves caused by the bad weather.

With 281 registered voters, the two precincts in Barangay Pag-asa, Kalayaan town, opened past 12:30 p.m. but were kept open until 5 p.m. The other polling centers closed at 3 p.m.

Jomel Ordas, provincial spokesperson for the Comelec, said 50 to 60 percent of Palawan’s 490,639 registered voters came out to vote, higher than the anticipated turnout of 47 percent, but the plebiscite’s result will not be known until next week.

The manual electoral exercise will decide the fate of Republic Act No. 11259, or the law dividing the province into Palawan del Norte, Palawan del Sur and Palawan Oriental.

Under the law, Palawan del Sur will comprise of the southern towns of Aborlan, Balabac, Bataraza, Sofronio Española, Kalayaan, Narra, Quezon and Rizal, with Brooke’s Point as its capital.

Palawan del Norte will include the towns of Busuanga, Coron, Culion, El Nido and Linapacan, with Taytay as its capital.

Palawan Oriental will be composed of the towns of Agutaya, Araceli, Cagayancillo, Cuyo, Dumaran, Magsaysay and San Vicente, with Roxas as its capital.

In Barangay Tara, in the island town of Coron, certain barangay officials sabotaged the opposition by refusing to hand in health declaration forms of voters whom they believed would vote against the Palawan split, but Jimenez said the Comelec was able to settle the matter.

Winston Arzaga, provincial information officer, said the capitol remained “positive” on the election result but would “respect the decision of the people.”