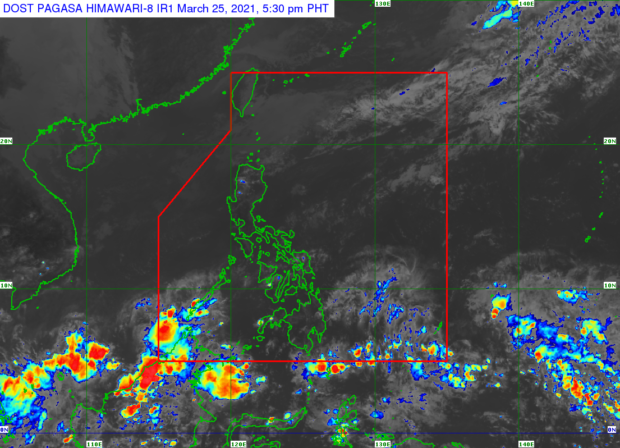 MANILA, Philippines — The low-pressure area (LPA) spotted on the west side of the Philippines was forecast to affect a broad portion of the country – from certain areas of Southern Luzon to the Visayas as well as Mindanao – this weekend.

According to Philippine Atmospheric, Geophysical, and Astronomical Services Administration’s (Pagasa) bulletin on Friday afternoon, the LPA, which is not expected to intensify as a tropical cyclone, was last seen 100 kilometers west-southwest of Zamboanga City and could likely affect Western and Northern Mindanao as well as Central and Western Visayas on Saturday as its trough, along with cloud bands, could cover areas in Calabarzon, Mimaropa, and the Bicol Region.

State meteorologists, meanwhile, said the northeast monsoon or amihan would still prevail over northern parts of Luzon and could possibly bring light and occasional rain over Batanes and the Babuyan Group of Islands.

The rest of the country, however, will have fair weather conditions save for isolated rains due to localized thunderstorms like what was experienced in the eastern portion of Metro Manila late Friday afternoon.

Pagasa said no gale warning is hoisted across the country for now, which means fisherfolk can freely set out to sea.