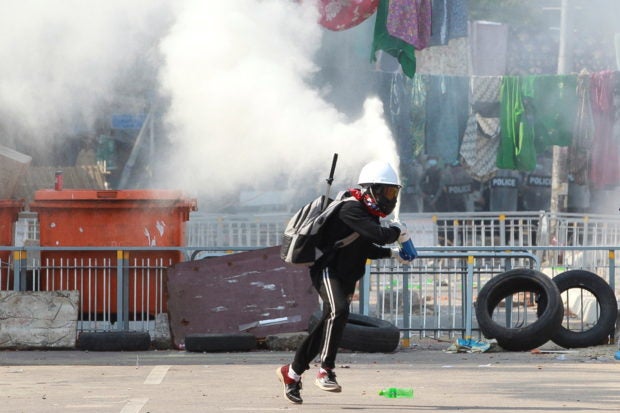 FILE PHOTO: An anti-coup demonstrator sprays a fire extinguisher as he runs away from a barricade during a protests in Yangon, Myanmar, March 9, 2021. REUTERS/Stringer

Protests were held in Yangon, Myanmar’s biggest city, and several other towns on Friday, according to photographs posted on social media by witnesses and local news organizations. There were no immediate reports of violence.

The Southeast Asian country has been in crisis since the army ousted Suu Kyi’s elected government in a February 1 coup, detained her and officials of her National League for Democracy party, and set up a ruling junta of generals.

Junta spokesman, Brigadier General Zaw Min Tun, said on Thursday Suu Kyi had accepted illegal payments worth $600,000, as well as gold, while in government, according to a complaint by Phyo Mien Thein, a former chief minister of Yangon.

“This accusation is the most hilarious joke,” Suu Kyi’s lawyer Khin Maung Zaw said in a statement posted on social media. “She might have other weaknesses but she doesn’t have weakness in moral principle.”

Thursday was one of the deadliest days since the military took power.

Among the dead were eight people killed in the central town of Myaing when security forces fired on a protest, the Assistance Association for Political Prisoners (AAPP) said.

In Yangon, protester Chit Min Thu was killed in the North Dagon district. His wife, Aye Myat Thu, told Reuters he had insisted on joining the protests despite her appeals for him to stay home for the sake of their son.

“He said it’s worth dying for,” she said through her tears. “He is worried about people not joining the protest. If so, democracy will not return to the country.”

The bloodshed also came hours after the U.N. Security Council had called for restraint from the army, which has been trying to put down daily anti-coup protests and paralyzing strikes.

Pro-democracy activists urged people not to be cowed and in posts on social media called for night demonstrations on Friday and for strikes and civil disobedience campaigns that have paralyzed swathes of the economy to continue.

Candlelight vigils by protesters in defiance of a curfew have occurred more frequently in recent weeks.

Thursday’s deaths brought the number of protesters killed since the coup to more than 70, the AAPP said. Some 2,000 people have also been detained since the coup, it says.

U.N. human rights investigator Thomas Andrews told the U.N. Human Rights Council in Geneva the military may have committed crimes against humanity. He called for multilateral sanctions on the junta and the state energy firm, Myanmar Oil and Gas Enterprise.

The army did not respond to requests for comment on the latest deaths but the junta spokesman said on Thursday the security forces were disciplined and used force only when necessary.

Amnesty International accused the army of using lethal force against protesters and said many killings it had documented amounted to extrajudicial executions.

Suu Kyi fought for decades to overturn military rule under previous juntas before the start of tentative democratic reforms in 2011. She had spent a total of around 15 years under house arrest.

The army has justified taking power by saying that a November election, overwhelmingly won by Suu Kyi’s party, was marred by fraud – an assertion rejected by the electoral commission.

Junta spokesman Zaw Min Tun reiterated the military would only be in charge for a certain period before holding an election. The junta has said a state of emergency will last for a year, but has not set a date for the election.