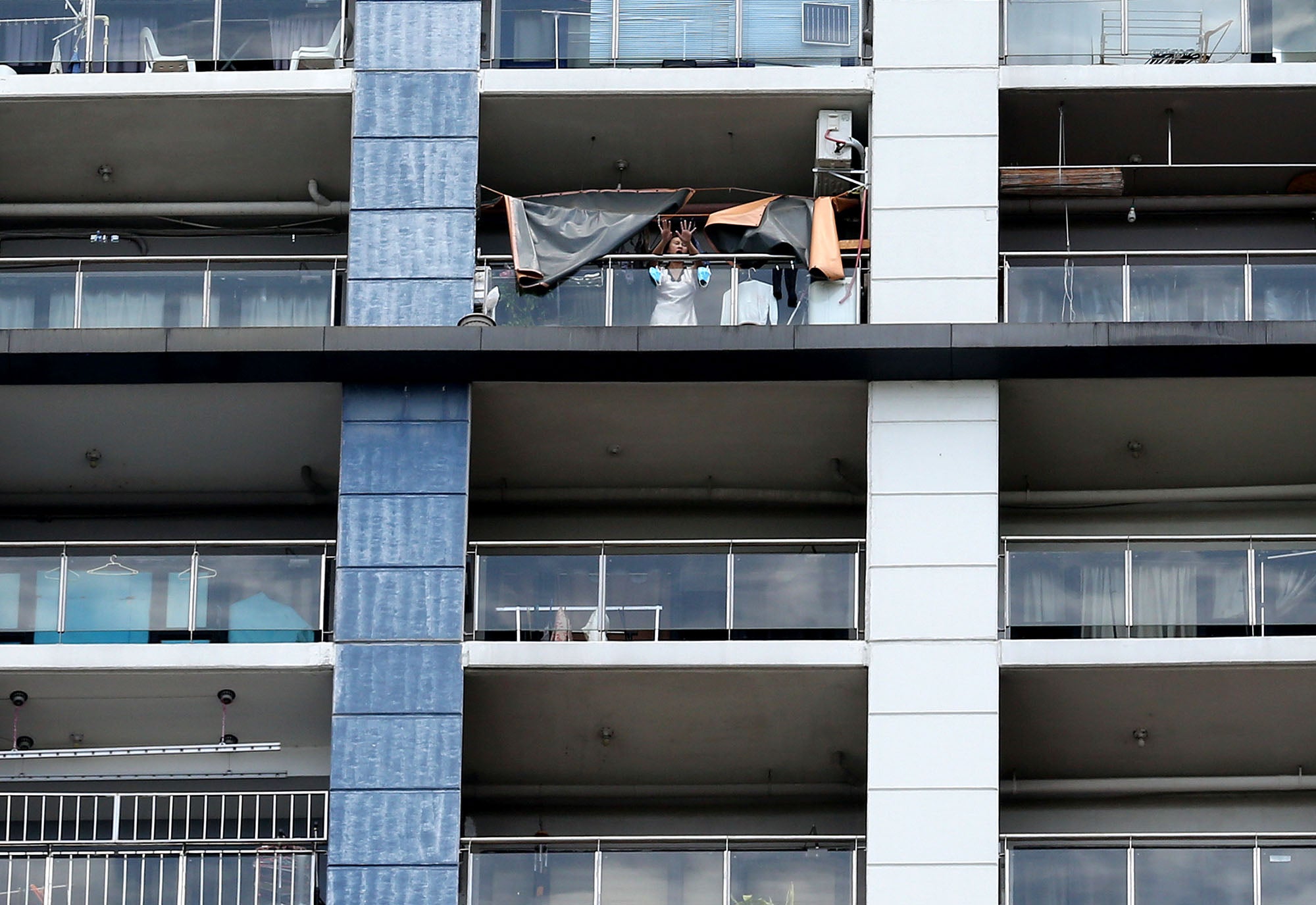 LAUNDRY DAY A resident of Malate Bayview Mansion hangs laundry on improvised clotheslines on her floor of the high-rise apartment building on Adriatico Street in Manila on Thursday. The building has been placed on lockdown for four days after cases of coronavirus infection have been detected there. —RICHARD A. REYES

The Department of Health (DOH) has told public and private hospitals to make more space for COVID-19 patients to avoid being overwhelmed as coronavirus infections increase, particularly in Metro Manila.

By next month, the government will open a 110-bed modular hospital at Quezon Institute in Quezon City that will exclusively handle moderate cases of COVID-19.

COVID-19 patients who are moderately ill are described as clinically symptomatic with pneumonia, but do not require ventilation yet.

“What we’re trying to do now [is] we’re [telling] hospitals that [the bed they had allocated for COVID] must be opened up again, because I know that when COVID [cases] dwindled or decreased in the last few months, [they] opened [the beds] to non-COVID patients,” Health Undersecretary Leopoldo Vega, who oversees the country’s overall treatment capacity, said on Thursday.

“We have to start to recover these beds so that we can prepare the hospitals for more COVID patients coming in,” he added.

Vega refused to describe the current situation as a surge, but noted an alarming increase in the number of new cases daily.

“If you take a look at the data … for this week alone, I think we’re almost hitting more than half of what we had [in] August [last year when] the peak was almost 5,000 cases. It’s quite alarming since in the last few weeks, the number of cases had already … plateaued,” Vega said.

The daily case count has been hitting more than 2,000 to over 3,000 in the first 10 days of March. Health officials say the more contagious variants of the coronavirus are not driving the spike in cases, but rather people’s abandonment of public health measures.

On Thursday, a year after the World Health Organization declared a coronavirus pandemic, the DOH reported 3,749 additional infections, bringing the number of confirmed COVID-19 cases in the country to 607,048 overall.

The DOH also reported that 63 more patients had died, raising the death toll to 12,608. It said 406 other patients had recovered, pushing the total number of COVID-19 survivors to 546,671.

Those deaths and recoveries left the country with 47,769 active cases, of which the DOH said 91.6 percent were mild, 4.4 percent asymptomatic, 0.77 percent moderate, 1.6 percent severe, and 1.6 percent critical.

The government, Vega said, is trying to prevent an overwhelming number of people seeking hospitalization, which could eventually overwhelm the health-care system.

Vega, however, said the Philippines was in a “better shape” this time, having learned from the gaps in the government’s pandemic response last year.

Aside from the modular hospital at Quezon Institute, whose construction is already about 90 percent complete, Vega said infrastructure at East Avenue Medical Center and Lung Center of the Philippines had been upgraded to better handle COVID-19 patients.

He said all temporary treatment and monitoring hubs—hotels and school buildings converted into quarantines for mild cases—were “running and operational,” although the occupancy rate was just 45 to 60 percent.

During his visit to De Los Santos Medical Center in Quezon City on Thursday, Health Secretary Francisco Duque III said about 79,700 doses of COVID-19 vaccines had been distributed to 361 hospitals and vaccination sites, out of the 1.12 million doses the Philippines had so far received from the global vaccine pool COVAX and from China.

But Duque said people must still strictly comply with public health measures, as achieving herd immunity was a long way off.

Officials blame the flare-up in infections on violations of minimum public health measures by quarantine-weary people, particularly in Metro Manila where local lockdowns have been imposed to suppress pocket outbreaks of cases.

The Department of the Interior and Local Government has directed local governments to pass ordinances penalizing breaches of health standards, while the Philippine National Police is considering deploying elite forces again to enforce health rules, such as wearing masks and face shields and physical distancing.

Speaking for the PNP in a radio interview on Thursday, Police Brig. Gen. Ildebrandi Usana said more officers would be deployed to places in the metropolis where spikes in COVID-19 cases had been reported and the deployment may include officers from the Special Action Force.

Defense Secretary Delfin Lorenzana told a public briefing on Thursday that some local governments had requested that soldiers be deployed to help the police enforce public health rules.

“Here in Metro Manila, I think there are only a few barangays placed on lockdown. So we will concentrate our troops there,” Lorenzana said. —WITH REPORTS FROM PATRICIA DENISE M. CHIU AND JEANNETTE I. ANDRADE