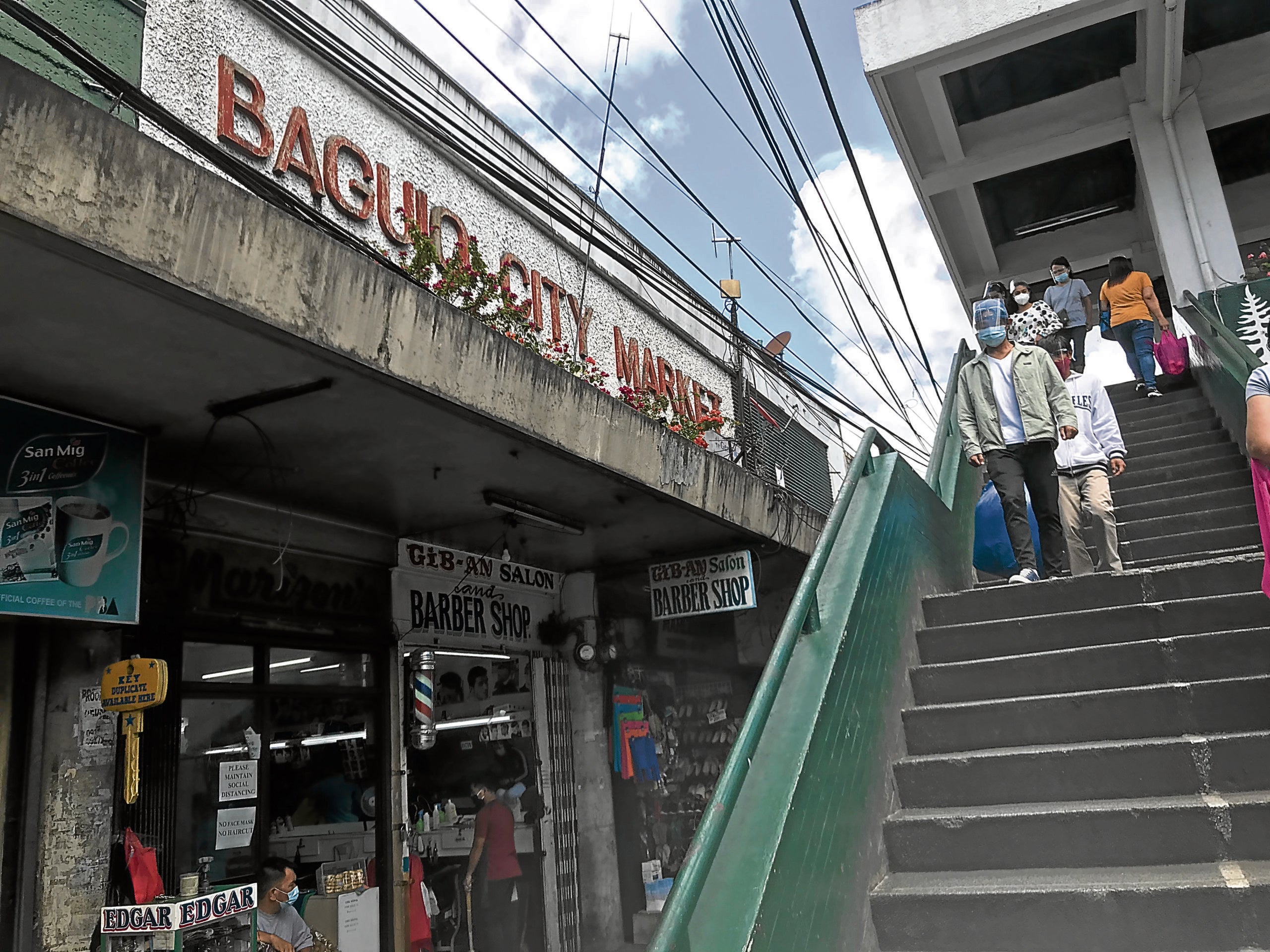 TRADING ZONE The Baguio City market, which has been serving the local community since the early 1900s, is a major trading zone that sits on prime real estate. It is popular among tourists looking for fresh vegetables, sweets and souvenir items. —EV ESPIRITU

BAGUIO CITY—A proposed ordinance that would spare the city’s more than a century-old market from being converted into a shopping mall was approved on first reading by the city council this week.

The measure, submitted through a citizens’ initiative, was drawn up by 1,448 Baguio residents, including lawyer Zosimo Abratique, president of the Baguio Market Vendors Association. It sets guidelines for all projects to be undertaken in rehabilitating or improving the market which has been serving residents since 1913.

The draft ordinance would stop the city government from putting up a new mall to replace the city’s primary community trading zone, which is among Baguio’s prime real estate.

“It is the objective of this ordinance to rehabilitate and modernize the existing public market [while preserving] its heritage and historical essence,” part of the proposed measure stated.

The citizens’ initiative was mounted in reaction to unsolicited proposals for a modern Baguio market which were offered by two competing shopping mall developers.

Both companies plan to put up multilevel buildings to replace the market at no cost to the city government in exchange for a 50-year lease, which had been considered for a public-private-partnership (PPP) arrangement.

One of the developers was granted an original proponent status (OPS) last year. The OPS signifies that the developer may begin negotiating the terms of reference for the market’s modernization.

The project would also be subjected to a Swiss challenge, which would allow other companies to try and match the proponent’s investment.

Abratique and a group of Baguio investors intended to provide a third unsolicited proposal for the market project and would participate in the Swiss challenge. 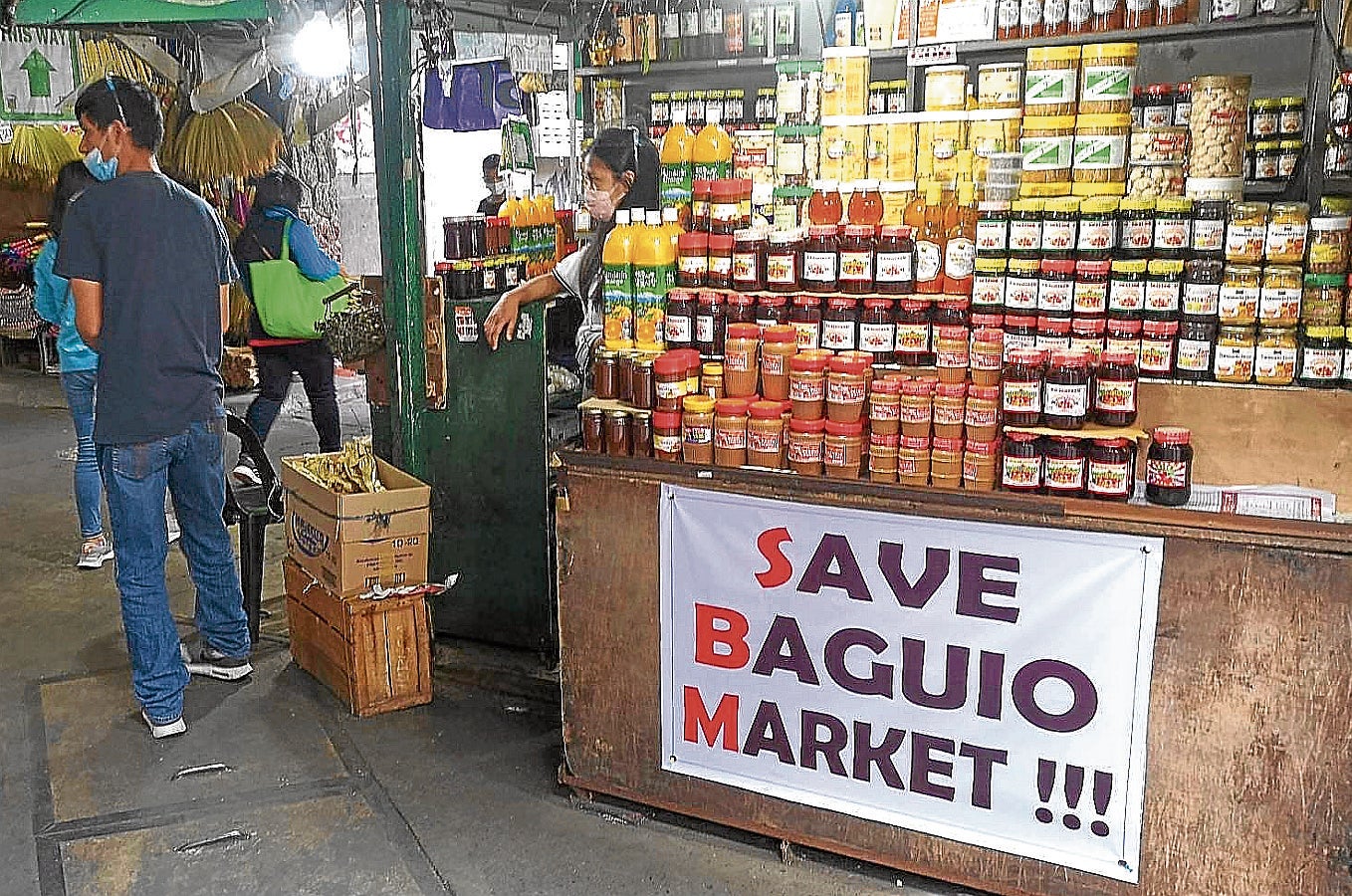 APPEAL Vendors at Baguio City market display banners at their stalls, urging local officials to save their livelihood as plans to modernize the historic commercial center are discussed in the city council. —EV ESPIRITU

During a March 4 dialogue with the vendors, city administrator Bonifacio dela Peña said the developer would need to address 34 concerns, among them the sentiment that the Baguio market was more valuable than its current property value.

The framework for negotiating the project would be based on a socioeconomic principle called the “commons,” Dela Peña told the vendors.

Proposed by National Artist Kidlat Tahimik, the city will stipulate that the market has bigger value as a shared communal space that should be preserved for future generations.

Kidlat (born Eric de Guia in Baguio City), who earned a master’s degree from the Wharton Business School of the University of Pennsylvania, serves as a consultant of the PPP committee overseeing the market project.

In an email to the Inquirer, Kidlat said negotiations must “weigh-in the [unquantifiable] … like the environment, the impact on livelihoods and the supply chain.”

He said the proposed rehabilitation of the market might also disrupt the “suki” (special customer-trader relationships) and “tawad” (bargaining) culture of consumption in the city.

“So much more is at stake than those per capita calculations to clinch a property deal … We must appreciate why all around the world farmers’ markets are being revived and wet markets are being defended against ‘mallification,’” Kidlat added.

The two malls guaranteed that none of the 4,000 Baguio vendors would be displaced, but the OPS developer would be giving them the basement and ground floor of its seven-story retail building, Dela Peña said.

“We will negotiate the best space for the market,” he said.

Dela Peña said the project should not compete with market vendors and should have no impact on the local supply chain, such as vegetables from Benguet farmers and fish from Pangasinan traders.

Read Next
Phivolcs: No permanent danger zone on Pinatubo
EDITORS' PICK
Manila is 78th most expensive city in the world for foreign workers
TeaM Energy pushes development programs to help in pandemic rebound
Want to help local farmers? Shop small and eat Real Food
Piolo Pascual: The Ultimate Heartthrob continues to level up
ICC is everything but a court of ‘white people’
Garcia softens stance, meets IATF halfway on swab-upon-arrival policy
MOST READ
Sharon Cuneta on living in the US: ‘Nagagawa ko lahat ng normal na bagay’
Mike Nieto asks fans: ‘No below the belt remarks’ toward South Korea
ICC is everything but a court of ‘white people’
Duterte-Duterte tandem possible but ‘winnability is another question’ — Binay
Don't miss out on the latest news and information.