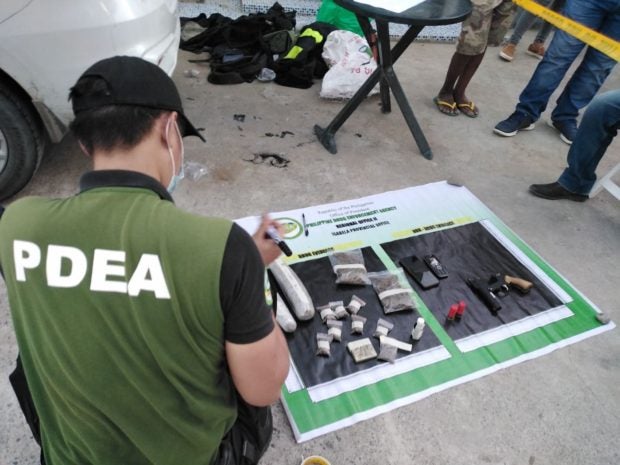 Agents of the Philippine Drug Enforcement Agency in Isabela and Kalinga, along with local police, inspect these seized marijuana bricks that they recovered from three people at the border of Kalinga and Isabela provinces. (Photo courtesy of Isabela police)

ROXAS, Isabela –– Authorities on Wednesday arrested three people and seized P196,000 worth of marijuana bricks, hashish (an illegal weed), and other items at the boundary of Isabela and Kalinga provinces.

The suspects were identified as Prince John Lord Paluyo, 20, from Cavite; Cyrus Crisologo, 18, from Makati City; and a minor from Antipolo City.

Col. James Cipriano, Isabela police director, said they seized 11 packs of marijuana bricks, two tubular marijuana leaves, a bottle of cannabis oil, and a brick of hashish from the suspects.

Also recovered from the suspects were a loaded shotgun, two mobile phones, and their car.

The suspects would face charges for violation of the anti-drug and firearms laws. INQ