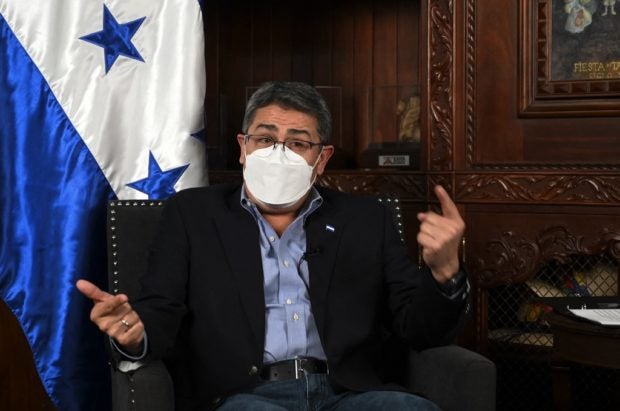 In this file photo taken on January 29, 2021 Honduras’ President Juan Orlando Hernandez gestures during an interview with AFP at the presidential palace in Tegucigalpa. Photo by ORLANDO SIERRA / AFP

TEGUCIGALPA — Honduran President Juan Orlando Hernandez on Wednesday denied allegations made by a US prosecutor that he helped smuggle tons of cocaine into the United States.

New York prosecutor Jacob Gutwillig said in federal court Tuesday that Hernandez was paid a $25,000 bribe by Geovanny Fuentes, who is on trial.

“How can anyone believe false testimonies that I was dealing with drug traffickers,” Hernandez wrote on Twitter.

Gutwillig claimed that accountant Jose Sanchez was present at meetings in 2013 and 2014 where Honduran Fuentes paid the money to Hernandez.

Sanchez was due to tell the New York jury about “the shock, the fear he felt when he saw the defendant sitting with the president,” said Gutwillig.

The witness worked at a rice-growing company through which Fuentes laundered money, the prosecutor alleged.

Sanchez will testify that Hernandez told Fuentes “they’d transport so much cocaine into the US they’d shove the drugs up the noses of the gringos,” said Gutwillig.

Hernandez, a lawyer who came to power in January 2014 and is in his second term, has styled himself as a champion in the fight against drugs.

US prosecutors consider him a co-conspirator alongside Fuentes but have not charged him.

The president’s brother, Tony Hernandez, was convicted of large-scale drug trafficking at a New York trial in 2019.

The sentencing in that case has been delayed several times and is now scheduled for March 23. Tony Hernandez could be sentenced to life in prison.

Prosecutors say he was the middle man between accused trafficker Fuentes and the president.

“It’s a proven fact that Los Cachiros tried to make a deal with the US,” Hernandez tweeted.

“But 10 days before my election (in 2013) Los Cachiros decided to abandon their billion dollar empire to negotiate their surrender to the US.”

Rivera began testifying Wednesday, telling the New York jury that he had worked with Fuentes from 2011 to 2013, until they got into a fight and the alleged trafficker tried to kill him.

“The defendant wanted to work with me guarding loads of cocaine, transporting it… and giving him custody, giving him security,” said Rivera, who faces a life sentence plus 30 years in prison but hopes it will be reduced in exchange for his testimony.

Rivera collaborated for two years with the US Drug Enforcement Administration until turning himself in to American authorities in 2015.

He has been a cooperating witness for the US government in other major drug trafficking trials in New York, including that of president Hernandez’s brother.

In the trial of Tony Hernandez, Rivera said the president received millions of dollars in bribes from drug traffickers to protect the cocaine shipments to the United States.