US to unveil Paris climate pact commitments in April 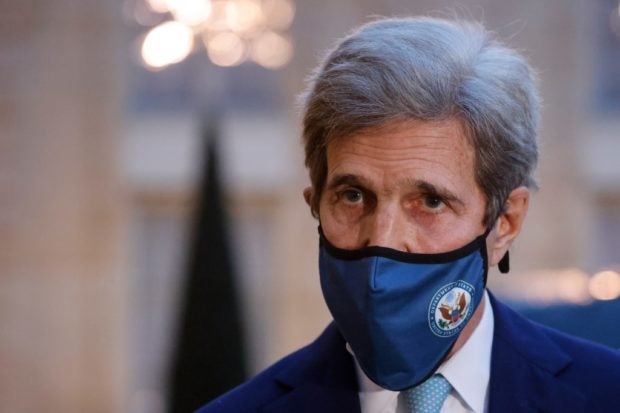 US Special Presidential Envoy for Climate John Kerry speaks to the press after a meeting with the French president at The Elysee Presidential Palace in Paris on March 10, 2021. Photo by Ludovic MARIN / AFP

PARIS — US climate envoy John Kerry confirmed Wednesday the United States would lay out new financing commitments for the Paris Agreement to cut greenhouse gas emissions ahead of an April 22 summit, the pact’s fifth anniversary.

Kerry announced the pledge after talks with French Finance Minister Bruno Le Maire, part of a European tour to signal a fresh commitment to fighting climate change after ex-president Donald Trump had pulled out of the Paris accord.

“We will announce our NDC at the April 22 summit or somewhere in the days before it,” Kerry said, referring to the nationally determined contributions required by signatories.

The summit will be a “building block” for the road to the COP26 UN climate conference in Glasgow in November, Kerry added, “and we will measure ourselves every day on whether we’re meeting this effort”.

Kerry and Le Maire also said they would jointly study efforts to enlist private financing for the fight against global warming, as governments scramble to line up funds to match the Paris accord goal to keep the global temperature increase to under two degrees Celsius, and ideally closer to 1.5 degrees, by 2050.

Kerry also met with French President Emmanuel Macron, who he said “wants to work with President (Joe) Biden extremely closely, not just on the reduction of emissions, but in helping to provide the tools that will achieve this goal, specifically climate finance”.

Le Maire added that “we have to bring together growth and the environment, and the United States once again shares this goal. Finance is the sinew of this war for the climate.”

Kerry estimated that “the private sector may be able to play the largest role of all and move faster than any other entity to help us reach our goal.”

But he gave a cautious welcome to France’s push for a so-called carbon border tax for the European Union, which would let governments set tariffs on imports from countries that do not impose strict limits on greenhouse gas emissions for making certain products.

“We haven’t been able to sit down and evaluate” whether or not it is the right tool, Kerry said.

“Our friends from France are planning to do a deep dive on it… and we look forward to hearing from them on how they might apply it and how it might work,” he said.

Asked to comment on Chinese commitments to limit climate change, Kerry was diplomatic regarding the world’s leading emitter of greenhouse gases.

“It’s not just about China,” Kerry said. “We are not trying to single out one nation.

“If China went to zero (emissions) tomorrow, we would still have a problem.

“This is a challenge for all of us,” he emphasized.