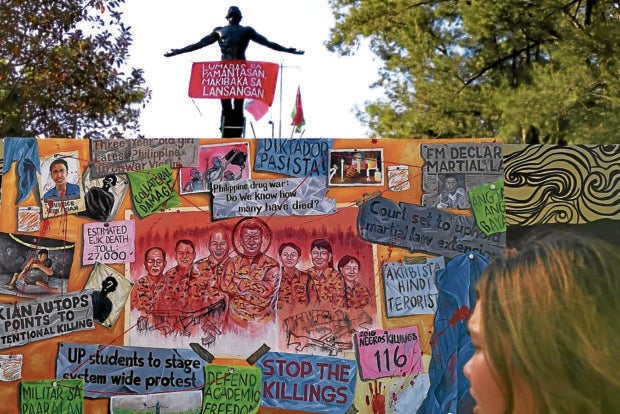 ACTIVISTS NOT TERRORISTS Rallies by militant students in Baguio City campuses have asserted that activism is not terrorism. —EV ESPIRITU

BAGUIO CITY, Benguet, Philippines — Saying it imperils civil liberties and endangers innocents, a retired bishop of the United Church of Christ in the Philippines (UCCP) asked a Baguio court on Monday to stop the planned “tokhang” tactic against activists, government employees and even journalists linked by law enforcement forces to the communist movement.

UCCP Bishop Emeritus Reuel Norman Marigza petitioned the court for an injunction and a temporary restraining order against three resolutions issued at the start of the year by the Cordillera Regional Law Enforcement Coordinating Committee (RLECC) that were directed against activists, arguing these policies were “unconstitutional.”

The most controversial of these policies is Resolution No. 4, series of 2021, which would deploy composite teams of police officers and anticommunist advocates to the homes of “Red-tagged” individuals, similar to the tactic launched by the Philippine National Police under its now infamous “Oplan Tokhang” — a term that blends the Visayan words “toktok (knock)” and “hangyo” (persuade) – when they knocked on the doors of suspected drug pushers and users to urge them to stop engaging in the illicit drug trade.

Thousands of suspects on the tokhang lists ended up dead, either during police operations or under questionable circumstances.

According to the RLECC, the tokhang tactic would persuade Left-leaning individuals to abandon their perceived allegiance to the New People’s Army (NPA), the Communist Party of the Philippines (CPP), the National Democratic Front of the Philippines (NDFP) “or any of its front organizations.”

Tokhang, used at the start of the government’s war on drugs in 2016, is being investigated by a United Nations human rights body for the killing of thousands of drug suspects.

The deaths of nine activists following simultaneous police raids on Sunday in the provinces of Rizal, Batangas and Cavite illustrate the degree of violence innocent people now face because of “Red-tagging,” said Marigza in an interview on Monday outside the Baguio courthouse.

The bishop described Resolution No. 4 as a “clear and present danger to [his] life and security.”

Marigza said he had been vilified on social media for his alleged connection to the armed rebels, along with bishops of other denominations who criticized President Duterte and the antiterrorism law.

His petition also asserted that tokhang against the Left violates the constitutional guarantee of an individual’s right to privacy and security at his home.

“I state for the record, and under oath, that I am not a member of the CPP or the NPA or the NDFP nor am I in any way connected with them,” Marigza declared in an attached affidavit notarized by his counsel, lawyer Francesca Macliing Claver.

The bishop said he filed the petition “as an act of self-preservation.”

“I am aware that Oplan Tokhang, used in the drug war, resulted in the killing of thousands of defenseless civilians [whom the police claimed to have] ‘nanlaban’ (fought back),” Marigza said.

He added: “There is hardly any guarantee that in the planned Oplan Tokhang against Left-leaning personalities, the police can exercise restraint in dealing with suspects like me.”

“Left-leaning,” much like drug suspects, have been “marked as enemies of the state who deserve to be eliminated without due process,” the bishop wrote in his petition.

RLECC Resolution No. 4 appears to acknowledge tokhang’s negative connotations when it proposed a collaboration with local churches, village leaders and nongovernmental organizations “to remove the fear brought by some instances of Oplan Tokhang against illegal drugs going wrong (sic).”

Marigza also asked the court to act on RLECC Resolution No. 2, which requires organizers of public assemblies and rallies to secure the permission of the police and the military. The policy is similar to restrictions imposed against protesters during the last years of the Marcos dictatorship.

According to RLECC Resolution No. 2, it recognized the public’s right to express grievances but justifies controlling rallies mounted by the Left as a way to stop the NPA and its sympathizers from agitating “unsuspecting individuals like the youth [into going] against the government.”

The RLECC asked local governments to include relief operations, fund drives and even academic research by activist organizations among activities that would require the blessing of the police and the Army.

The bishop also petitioned the court to freeze RLECC Resolution No. 1, which coerces Cordillera villages to “consider as a dishonor” the participation of family members in the communist movement, as well as activist organizations.

In Congress, the Makabayan bloc filed House Resolution No. 1607 on Feb. 26 to launch an inquiry into the RLECC’s tokhang plans, saying it could “open the floodgates for another wave of widespread rights violations and extrajudicial killing.”

The RLECC had been invited to a Monday afternoon inquiry by the city council regarding these resolutions.