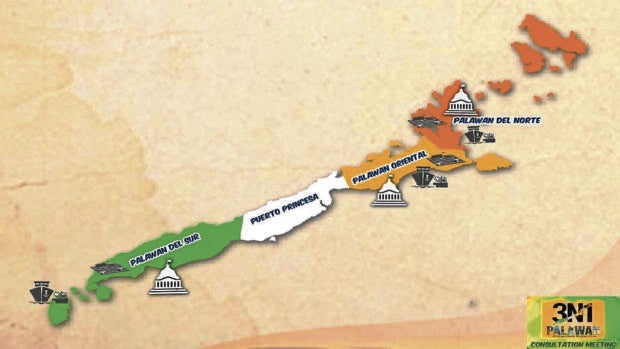 DIVISION Map indicates how Palawan will be divided into three provinces if Republic Act No. 11259 is ratified in a plebiscite scheduled on March 13. —CONTRIBUTED PHOTO

PUERTO PRINCESA CITY, Palawan, Philippines — The Commission on Elections (Comelec) is expecting a low turnout during the plebiscite set this Saturday to determine whether Palawan will be split into three provinces, but this will not affect the result.

The voter turnout is not necessary for the validity of the results of the plebiscite, pointing out that only a majority vote will determine whether Palawan will become three provinces, said lawyer Gloria Ramos Petallo, the regional election officer for Mimaropa (Mindoro, Marinduque, Romblon and Palawan).

The voters will only be ask to cast a yes vote if they are in favor of the split and no if they are against it.

The plebiscite is set to start at 7 a.m. of March 13 and will end at 3 p.m., involving over 3,000 voting precincts across the province.

The provincial board of canvassers will convene at 6 p.m. on the same day to count the ballots.

Palawan has 23 towns and one independent city, Puerto Princesa.

Even if RA 11259 is ratified, Puerto Princesa City remains a highly urbanized city independent from Palawan province, based on Proclamation No. 1264 signed by then President Gloria Macapagal-Arroyo on March 26, 2007, and ratified in a plebiscite on July 21, 2007.

Puerto Princesa will cease to become the provincial capital and will become independent from any of the three provinces.

Under the law, Palawan Del Sur will become the mother province composed of the southern towns of Aborlan, Balabac, Bataraza, Sofronio Española, Kalayaan, Narra, Quezon and Rizal, with Brooke’s Point as its capital.

Palawan Del Norte will include the towns of Busuanga, Coron, Culion, El Nido and Linapacan, with Taytay as its capital.

Palawan Oriental will be composed of the towns of Agutaya, Araceli, Cagayancillo, Cuyo, Dumaran, Magsaysay and San Vicente, with Roxas as its capital.