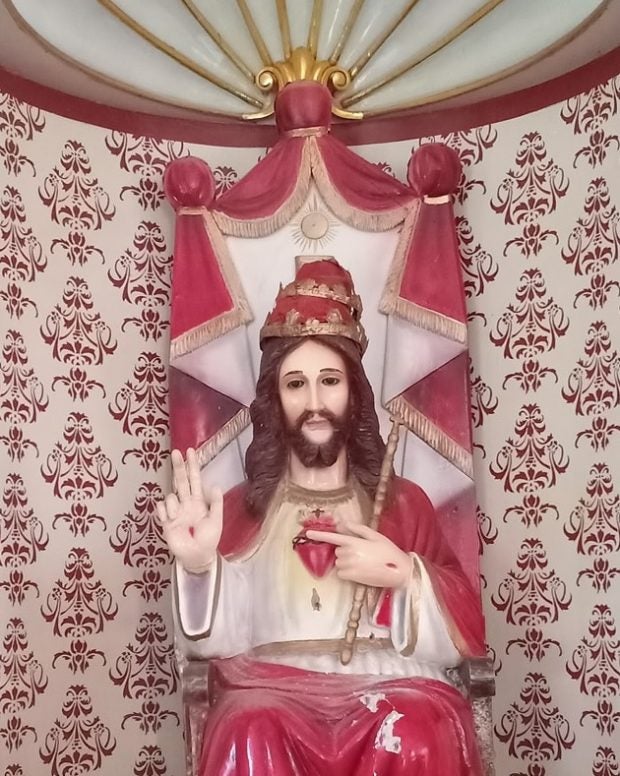 The statue of Christ the King in Kabacan town, Cotabato province incurred three bullet marks – one just below the heart, on its waist, and its left knee after an unidentified gunman fired at it over the weekend. CONTRIBUTED/Rasty Manuel

KIDAPAWAN CITY –– An unidentified man barged into a Catholic church in Kabacan, Cotabato province at past 6 a.m. on Saturday, March 6, and shot the statue of Christ the King thrice.

The statue incurred three bullet marks – one just below the heart, on its waist, and its left knee, said Rasty Manuel, a Kabacan resident and Christ the King devotee, who posted the image of the damaged statue on his Facebook page.

A witness saw the man, who appeared to be in his 40s, barge inside the parish church in Poblacion and yelled, “If you are really the powerful God, save yourself,” before firing three shots using a caliber-45 pistol at the statue in the middle of the altar.

“God knows. God sees everything! Do not disrespect Him, nor challenge Him. Many have done it in the past then regretted it in the end,” Manuel ranted, addressing the attacker.

The attacker believed to be mentally disturbed, left on a motorbike, according to the witness.

Cotabato Gov. Nancy Catamco and Kabacan Mayor Gerlo Guzman have separately directed the police to look into the matter and bring the perpetrator before the bar of justice.

In the Lamitan incident, the statues were either beheaded or toppled down.

Read Next
UCCP bishop asks Baguio court to stop ‘Tokhang’ vs Left
EDITORS' PICK
PH logs 20,755 new COVID-19 cases; no deaths reported again due to glitch
Huawei’s relentless mission to bring ultimate health and wellness tracking for your fitness goals
Urban poor struggle to adapt as rising seas threaten to remap Metro Manila
Smart powers Liga Adarna Season 4: Race to the Top
Don’t use military to threaten people, Robredo tells Duterte
Smart reaffirms 5G leadership as PH’s most reliable 5G mobile operator
MOST READ
Group rallies support for Robredo as she calls for a united opposition
Trillanes to give Robredo until last day of COC filing before finalizing presidential bid
Bong Go says he is not seeking presidency in 2022
It’s clear Marcos camp is afraid of Robredo after losing to her thrice — OVP spox
Don't miss out on the latest news and information.