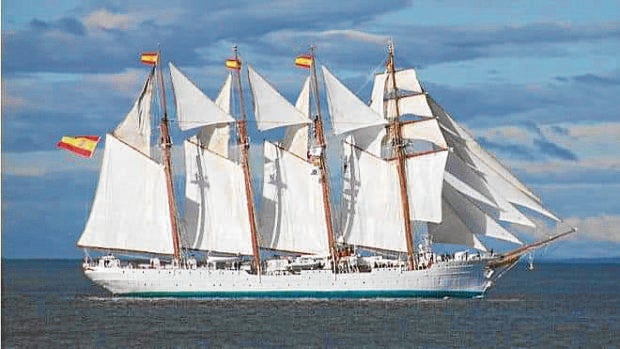 REMAKING HISTORY This ship named after Spanish navigator Juan Sebastián Elcano will arrive next week to reenact the first circumnavigation of the globe. —PHOTO FROMTHE FACEBOOK OF THE EMBASSY OF SPAIN

MANILA, Philippines — The Spanish training ship Juan Sebastián Elcano will arrive in the Philippines to reenact the first circumnavigation of the globe—one of the most significant achievements in the history of mankind—500 years ago.

The Spanish Embassy in Manila said the ship, commonly known as “Elcano,” will arrive in Guiuan, Eastern Samar, on March 16 and will be in Suluan and Homonhon islands until March 18 and later in Cebu (March 20 to 22), “in the very places where the expedition made the first visual contact, landing and human encounter on those very dates but only just 500 years later.”

The embassy added that navigation through the Philippines is a key part of the tour the Spanish training ship is making to commemorate the Magellan-Elcano expedition route that made circumnavigation possible.

“The journey was a historical leap forward and a technical challenge for that time. Initially, five ships and 238 men departed Spain as part of the expedition and only 18 men and one ship made it back three years later,” it said.

The training ship was named after Juan Sebastián Elcano, a Castilian navigator from the Basque town of Guetaria, who completed the first circumnavigation of the earth. After Portuguese explorer Ferdinand Magellan’s death in the Philippines, Elcano took command of the carrack Victoria from the Moluccas to Sanlúcar de Barrameda in Spain.

Elcano completed the first recorded circumnavigation of the globe in a span of three years and covered a distance of 14,000 leagues.

Built in 1928, the Elcano is a four-mast brig-schooner, 113 meters long, and is the third tallest ship in the world. The training ship has since sailed the greatest distance, completing 77 training voyages, and covering more than 3.7 million kilometers.