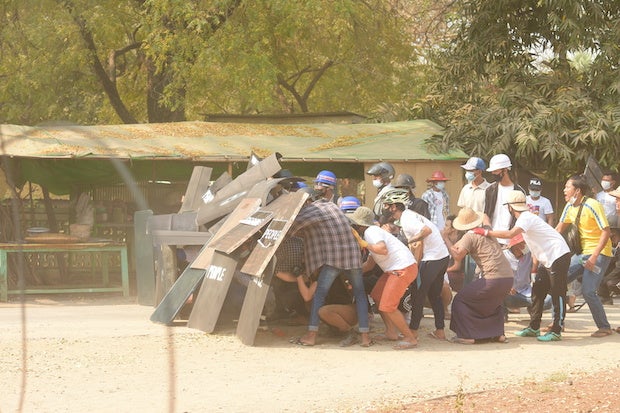 Protesters create a shield formation in Nyaung-U, Myanmar, March 7, 2021, in this still image from a video obtained from social media by Reuters.

An alliance of influential worker unions in Myanmar has called for an extended nationwide strike starting on Monday, with the intention of causing the “full, extended shutdown” of the country’s economy in an attempt to stop a military coup.

In a statement, nine labor organizations called on “all Myanmar people” to stop work in an effort to reverse the seizure of power by the military, which overthrew the civilian government on Feb. 1.

Moe Sanda Myint, chairwoman of the Federation of Garment Workers Myanmar, said she believed the majority of workers would join.

“We are urging to continue the strike until the dictatorship is uprooted,” she said.

Andrew Tillett-Saks, Myanmar Country Program Director and Regional Senior Organizing Specialist for the Solidarity Center, a U.S-based worker rights organization, said the strike “increases the likelihood that many more from the private sector will answer the call in the days and weeks that follow.”

“This is a strategy that could actually plausibly really pressure the military,” he said.

A spokesman for the military junta did not answer phone calls seeking comment.