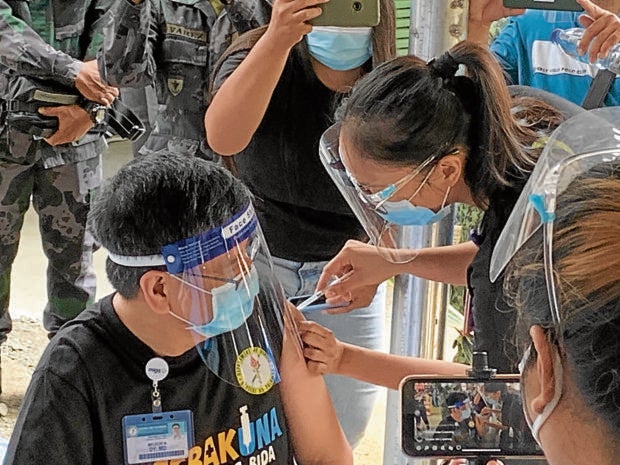 PUERTO PRINCESA CITY—Majority of the front-line medical workers in the government-run Ospital Ng Palawan (ONP) in this city refused to be vaccinated with the China-made CoronaVac and opted to wait for the arrival of the jab manufactured by a British pharmaceutical company.

The vaccine made by the Beijing-based Sinovac Biotech Ltd. was made available to health workers in Palawan on Sunday but only 180 out of 698 ONP employees signed up for the free vaccination.

There was a higher number of “willing” individuals to be inoculated with CoronaVac but most hospital workers “backed out” upon hearing news that the vaccine made by British-Swedish company AstraZeneca would soon be available in the country.

“At first, there were more who were willing to be vaccinated. But when they learned that AstraZeneca is coming, they backed out and we can’t force them to change their decision because this is supposed to be voluntary,” said ONP medical center chief Dr. Melecio Dy.

Dy, 58, was the first Palawan resident to be inoculated with the CoronaVac jab.

Dy was confident that if those inoculated with Coronavac would not show adverse reactions, the number of hospital staffers willing to receive the vaccine would increase, citing the reluctant front-liners’ “wait and see attitude.”

Health Secretary Francisco Duque III earlier assured health workers who had declined the CoronaVac that they “won’t lose their prioritization” and they could get a share from the initial batch of AstraZeneca jabs, which arrived in the country on Friday.

The Department of Health (DOH) has yet to announce detailed plans for the distribution of the 487,200 AstraZeneca doses that made up the first delivery to the Philippines from COVAX, the global vaccine pool led by the World Health Organization.

“There is no perfect vaccine, so if we have available vaccines, we should get it to prevent moderate to severe cases of COVID-19,” Dy added.

ONP, which serves as the primary COVID-19 referral hospital in the province, was given 1,218 doses from the total of 5,260 Sinovac jabs allotted by the DOH for Palawan.

As of Sunday morning, there are only four remaining active COVID-19 cases in Palawan, out of 615 reported cases, with six deaths and 605 recoveries.

Last week, Bulacan Gov. Daniel Fernando said some of the health workers in the province also backed out of the initial inoculation after learning that they would receive the Sinovac jabs.

But hospitals in the cities of Malolos, Olongapo and Tuguegarao proceeded with their vaccine rollout despite refusal of some front-liners to be inoculated with CoronaVac.

On Sunday, over 200 front-line health-care workers of James L. Gordon Memorial Hospital in Olongapo City and the Cagayan Valley Medical Center in Tuguegarao City received the CoronaVac jabs. Some 822 front-liners of Bulacan Medical Center in the City of Malolos were set to get their jabs on Monday.