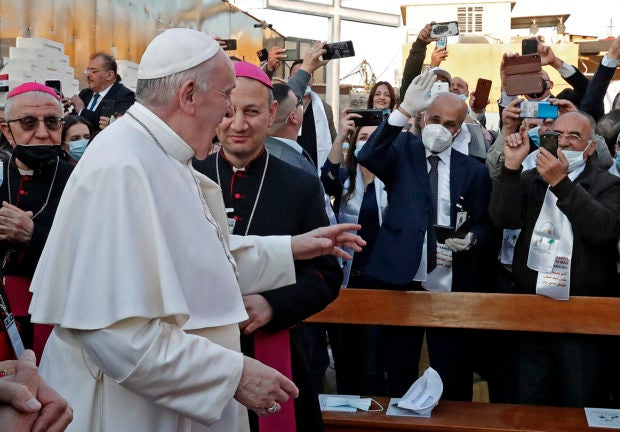 Pope Francis arrives at Baghdad’s Saint Joseph Cathedral on the second day of the first papal visit to Iraq on March 6, 2021. Photo by Sabah ARAR / AFP

BAGHDAD — In the sun-soaked courtyard of Baghdad’s St Joseph Cathedral, members of Iraq’s dwindling Christian community waited in solemn silence for a man they’d never dreamt they would see.

Some of the women, who appeared to outnumber the men, wore dainty black or white veils, a sign of respect for the leader of their faith, 84-year-old Pope Francis.

They sat on wooden benches decorated with bright flowers and fingered rosaries or small prayer books as they counted down the minutes for the pontiff to arrive.

Then, suddenly, the quiet was shattered by shrill ululations as hundreds of hands spontaneously flew toward the sky.

The white-clad pope had just stepped into the outer courtyard — and he too seemed just as happy to be close to his faithful.

The other gatherings of his Iraq visit — in Baghdad on Friday and at the ancient site of Ur earlier on Saturday — were much more orchestrated, and Francis was physically further from worshippers.

Young attendees were rare in Baghdad amid the rows upon rows of greying hair and eyes ringed by wrinkles — but they were visibly excited.

Many pulled out their phones to take selfies, tugging down their masks to reveal ear-to-ear grins for the historic occasion.

A children’s choir had been prepped to welcome Francis with song.

“We’ve been practicing for three whole days!” said one of the young girls, wearing an oversized cap with the pope’s face printed on it.

Inside the church, the congregation greeted Francis with more ululations and wisps of incense, ubiquitous in the Chaldean liturgy.

They sung Arabic hymns about love and heaven, muffled only slightly by medical masks worn to prevent the spread of the coronavirus.

Attendance was limited to allow for social distancing, amid fears the service could become a super spreader event as a deadly second wave of coronavirus cases has hit Iraq.

Each church in Baghdad granted just 13 invitations to distribute to their parish, according to Father Nadheer Dakko of the St. Joseph Cathedral.

“This is the first real encounter his Holiness is having with his flock,” he told AFP.

As the pope began delivering his homily in Latin, many raised their phones to begin filming while listening intently to the Arabic translation.

Francis spoke of the humility of love, of bearing witness, of strength in the face of persecution.

It resonated for Nabeel Yaacoub, a 46-year-old Baghdad resident.

“I survived everything, all of the sectarianism, the violence, the explosions in Baghdad,” said Yaacoub, sitting in the first row in the church’s courtyard, where he could watch the service on a screen.

“Now that the pope is here, in this land where there has been so much hurt, he can heal these wounds,” he told AFP. “It’s like a father finally coming home.”

In a first on the Iraq trip, communion was served.

Francis blessed the bread and wine, which Catholics believe are the body and blood of Jesus Christ, but did not give out the Eucharist himself.

Instead, a half dozen priests fanned out across the church to spray disinfectant in the hands of the faithful before placing the communion bread in their palms.

One woman asked a priest to place a Eucharist in a small jeweled metal box to take home to a sick relative.

The limited tickets had irked many Baghdadi Christians, who had skirted around security checkpoints set up all around the church to reach its gates.

“I’ve been waiting outside the church since noon, but I’ve been waiting for this moment my whole life,” said Samira Youssef, a Catholic Iraqi who came with her sister to try to attend the mass.

Nearby, a young child scratched his head while looking at the Vatican guards, easily three times his height, blocking the church gate.

“I live around the corner and I come here all the time to light candles,” said Fahad, a 12-year-old Muslim.

“But today the pope is here! Still, I hope it’ll become normal. I hope he comes to Iraq all the time.”

Read Next
Moderna announces deal with PH for 13 M doses of COVID-19 vaccine
EDITORS' PICK
Infants bundled off; no one hurt in PGH fire
Tired of your Wi-Fi signal problems at home? Here’s a solution!
OPINION: Mischief Reef – where it all started
POVA x Mobile Legends Bang Bang: A partnership that’s built to win
CPA Australia and their designation: Advance your career
Fire-damaged PGH calls for donations
MOST READ
Leonen impeachment case moves forward in House
Hot, humid weather for PH on Monday — Pagasa
Longest recession since Marcos era
Long working hours are a killer, WHO study shows
Don't miss out on the latest news and information.