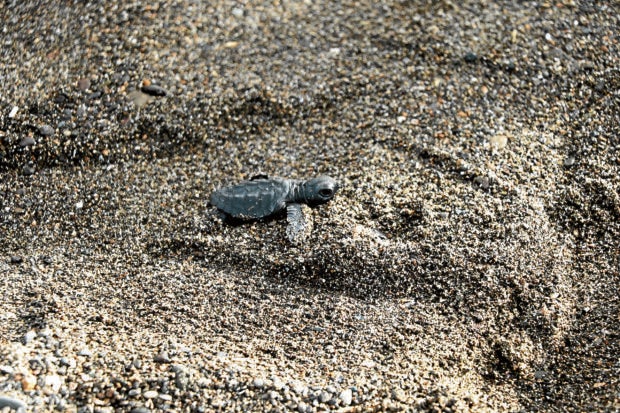 TIGBAUAN, Iloilo, Philippines — In the village of Atabayan here, a female turtle has returned to her birthplace to make the sandy shore as her own nesting ground.

Her 68 eggs were discovered by fisherman Rodrigo Traifalgar on the chilly morning of Oct. 24 as he was about to start his day at sea. His attention was caught by three dogs barking and digging at a spot not too far from the pumpboats docked at the shoreline.

“The dogs were barking up a racket that was hard to ignore. When I went for a closer look, I saw eggs, a lot of them,” said Rodrigo, 54.

The discovery, however, has moved the community together, particularly the village’s youth, to protect the eggs and the nesting site so the turtles would return one day to lay their eggs.

“To protect our wildlife, it is important to understand how these species interact within their ecosystems and how they’re affected by environmental and human influences,” said Larry Traifalgar, chair of Atabayan Youth Organization (AYO), which advocates for environmental protection and conservation in the village.

Members of AYO, as well as barangay officials, immediately moved to protect the eggs after Rodrigo reported the discovery.

AYO members retrieved the 68 sea turtle eggs from the original nesting ground about 5 meters from the shorelines of Zone 4 Greenhorn Paradise.

The eggs were transferred to another hole 5 to 7 meters away from their first nest to prevent these from being swept away and drenched by rushing seawater from rising tides. 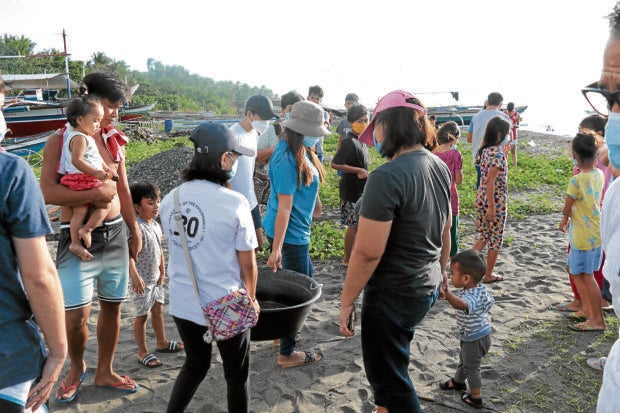 COMMUNITY SENDOFF Staff members of Southeast Asian Fisheries Development Center FishWorld bring the hatchlings near the shoreline in Tigbauan. Residents also witnessed the sendoff for the marine creatures hatched in their village.

“When the eggs were first found, storm signals were raised because of Typhoon Quinta (international name: Molave) and we were warned of high tides. We hurriedly tried to transfer them before the typhoon came,” said 23-year-old Larry, Rodrigo’s nephew.

Larry said the community also reached out to FishWorld, the nearby museum-aquarium of Southeast Asian Fisheries Development Center (Seafdec), which is dedicated to science and environment education.

The technical staff of FishWorld assisted AYO members on how to properly take care of the grounds while the eggs incubated on-site, as well as help them surround the area with a protective chicken wire and screen to keep away stray dogs.

“We also assisted FishWorld staff in constantly monitoring for the appearance of hatchlings after we were instructed on how to properly take care of the grounds,” said Larry, a graduate of Hotel and Restaurant Technology.

Rodrigo shared that this was the first time in decades that Atabayan once again became a sea turtle nesting ground. “Based on the stories of our [elders] in the barangay, the last time a sea turtle was spotted in the area was way back in 1976,” he said.

He said an operator of a “sungkit” (motorized skimming nets) reported a late-night sighting of a sea turtle on Oct. 1, which was speculated to be the mother of the eggs left onshore.

According to Hananiah Sollesta Pitogo, officer in charge of Seafdec FishWorld, sea turtles always lay their eggs on the same beach they were born.

A 2015 study published in Current Biology explained that sea turtles rely on the earth’s magnetic field to find their way home. Different coastlines have their own magnetic signature, which the turtles remember and use later as an internal compass.

“With this in mind, there is a possibility that Barangay Atabayan can become a permanent nesting ground for sea turtles,” Pitogo said.

Only three hatchlings out of 68 eggs resurfaced from the nest in Atabayan in November and they were immediately released to ocean waters.

Pitogo identified them as belonging to the olive ridley species (Lepidochelys olivacea). Named for the color of its shell, olive ridley turtles are the most abundant species of sea turtles worldwide but they are uncommon to oceanic islands. 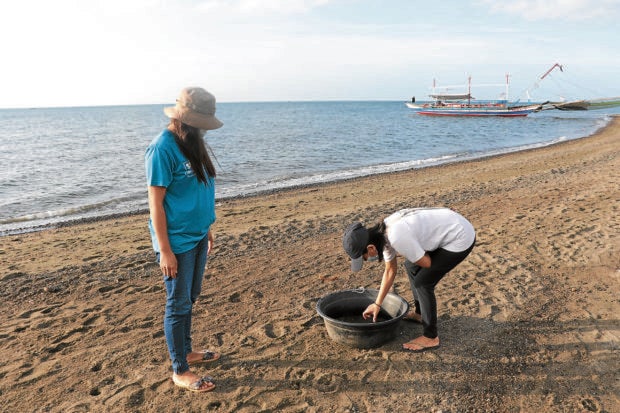 SURVIVAL CHALLENGE A final check on the hatchlings is done to ensure that they are healthy before they are released into the sea to survive in the wild.

According to studies, there are few confirmed nesting sites of this species which are mostly found along the West Philippine Sea.

The species are tagged as vulnerable in status by the International Union for Conservation of Nature and this designation is linked to the fact that these turtles can only nest in a very small number of places.

Any disturbance to even one nesting beach can have huge repercussions on their entire population.

“In Barangay Atabayan’s case, we had to move the eggs from their original nesting location to guarantee safe hatching and survival of hatchlings,” Pitogo said.

“If we didn’t move them to higher ground, the eggs will be swept away by the tides or worse, become spoiled when in contact with seawater,” she added.

In a paper published by the Royal Society Open Science in 2015, immersion in seawater kills sea turtle eggs, suggesting that sea turtles are constantly at risk from rising sea levels.

Larry said barangay officials, along with AYO members, were working on an ordinance that would safeguard and limit human disturbances on sea turtle nesting grounds in their area.

For now, AYO members were tidying up the area where the nesting grounds were found.

Carl Florence Camiña, AYO vice president, said he usually checked the nest to see any changes since he lived close to the area.

“Sometimes, I also guide the younger kids who live nearby on how to help look after the nesting site every morning and every afternoon,” he said.

Bebzie Gaitan, AYO president, said this sea turtle encounter had been a positive and enlightening experience.

“This was the first time we encountered this [event] in our generation. We were eagerly anticipating what would happen when it hatched and we were excited when the hatchlings were finally released,” Gaitan said.

Larry stressed that it also came with a responsibility to them as youth leaders of the barangay to further boost efforts to protect their environment.

“By conserving wildlife, we’re ensuring that future generations can enjoy our natural world and the incredible species that live within it,” he said.