Hospital trash collector among first to get inoculated with the China-donated vaccine
By the Inquirer Bureaus / 05:04 AM March 06, 2021 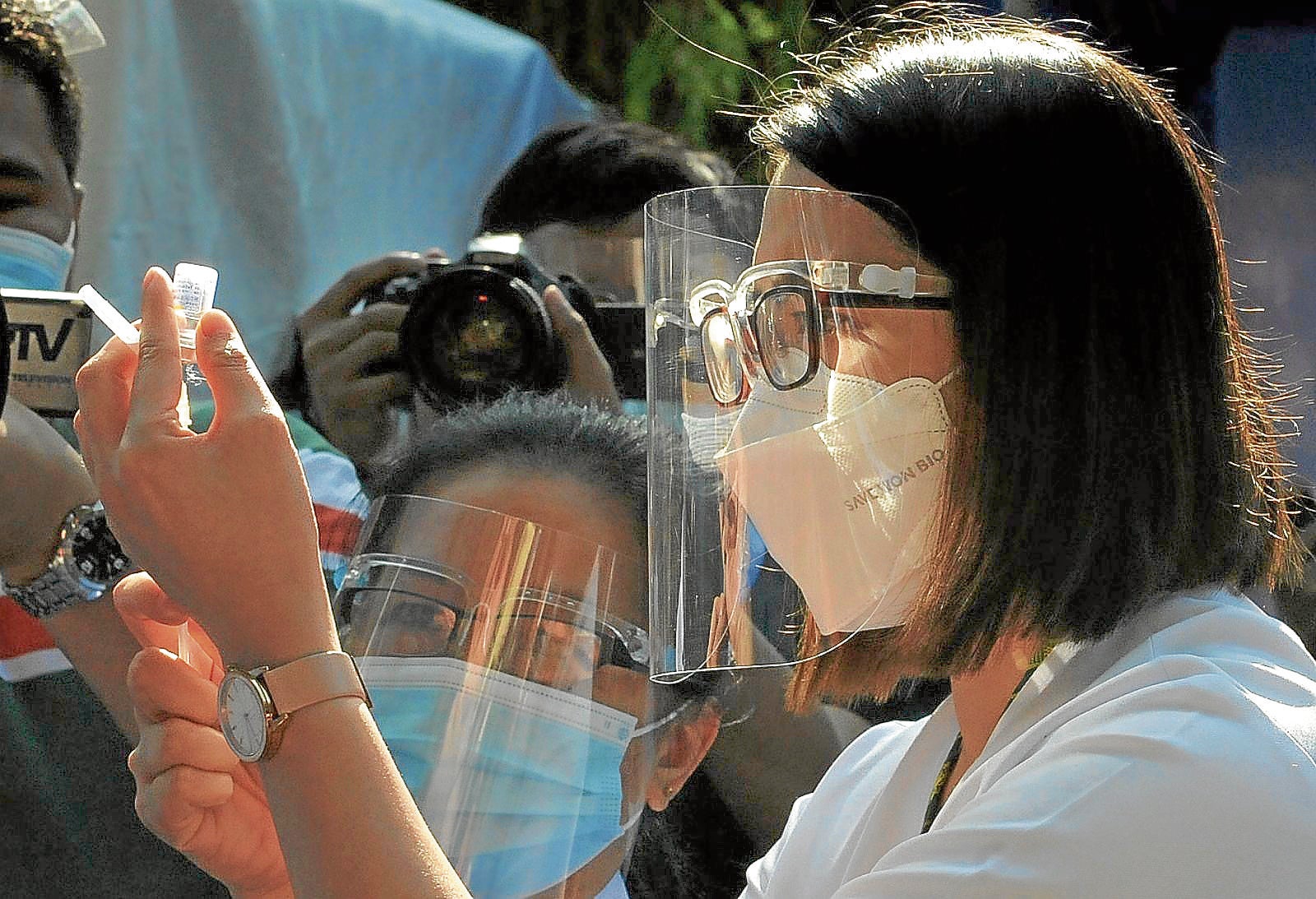 READY FOR THE JAB Baguio City stages the first vaccination rollout of China’s Sinovac vaccines for the Cordillera on Friday. Instead of allocating the doses for five major hospitals in the region,
health authorities authorized its use as first doses for all private and public medical workers in the mountain region. —EV ESPIRITU

BAGUIO CITY—Cyrene Romero is part of the sanitation team that has been cleaning up after patients confined at the Baguio General Hospital and Medical Center (BGHMC) are discharged.She quickly became one of its most vulnerable staff when the coronavirus pandemic broke out a year ago.

“We collect the trash of patients and we clean their toilets. Hospital cleanliness starts with us to prevent the spread of the virus,” Romero told the crowd after she was injected with the CoronaVac vaccine on Friday along with seven other Baguio front-line health-care workers.

BGHMC, which has served as a primary COVID-19 facility and testing laboratory for northern Luzon, hosted the launching program of the Cordillera’s immunization rollout using the vaccine developed by Chinese firm Sinovac Biotech Ltd.

The rank and file were represented by ambulance driver Fernan Tong-an, who survived his bout with COVID-19, and Edward Sipudlao, the hospital’s financial management officer.

The vaccination program took place just as Baguio deals with spikes in infections this week, which have been attributed to the city’s business process outsourcing firms.

Baguio also heeded a uniform travel guideline that no longer requires travel and health certificates and mandatory tests, which was imposed by the Inter-Agency Task Force for the Management of Emerging Infectious Diseases.

The BGHMC event jump-started the vaccination of 8,828 medical front-liners in both the public and private sector of the Cordillera.

“Hurray! Walang aray,” Dr. Ricardo Audan, officer in charge of the Southern Philippines Medical Center in Davao City, described what he felt minutes after he was vaccinated with CoronaVac during the kick-off ceremony signaling the start of vaccination in the city on Friday.

“As of today, I’m very normal. I don’t feel anything; my blood pressure is normal. No pain at all,” said Audan, who earlier admitted he has hypertension but has agreed to be the first person to be vaccinated in Mindanao to convince health-care workers that the vaccine is safe.

Health authorities reiterated that health-care workers still hesitant to take the Sinovac vaccine would still be prioritized for other vaccines coming into the country.

Vaccine czar Carlito Galvez Jr. said that aside from the 600,000 doses of the Sinovac vaccine that arrived, another 400,000 doses from other pharmaceutical companies will be arriving in the next few months, including the much-awaited Pfizer-Biontech vaccine.

In Legazpi City, three doctors were among the 100 health front-liners who were inoculated on Friday, the first day of the vaccination activity at the Bicol Regional Training and Teaching Hospital (BRTTH).

Doctors Raoul Emmanuel Zantua, head of the out-patient department; Edberto General, medicine department head; and Anna Lynda Bellen, infectious disease specialist and BRTTH spokesperson, said they were glad to be the “role model” for other front-liners hesitant to get the CoronaVac jab.

Dr. Salvacion Macinas, BRTTH acting medical chief, said she was not eligible because she is a senior citizen and was infected with the virus last year.BRTTH received 1,200 Sinovac doses but only 800 were willing to receive the vaccine, said Macinas.

In Cebu City, the vaccine rollout that began on Thursday would continue for seven days. The city was the first local government outside Metro Manila to start a vaccination program.

The other Visayan provinces, including Cebu, were to receive their shares of the CoronaVac vaccines between Friday and the weekend.

Dr. Mary Jean Loreche, spokesperson of the Department of Health in Central Visayas (DOH-7), said Cebu City was allotted 17,480 doses of CoronaVac; Cebu province, 4,954; Bohol, 6,576; Negros Oriental, 2,735; and Siquijor, 28 doses. Sinovac vaccines also arrived on Friday in Dagupan City, which received 14,400 doses intended for the Ilocos Region; Tuguegarao City, which got 10,800 doses for distribution in the Cagayan Valley provinces of Cagayan, Isabela and Quirino; San Fernando City, with 11,000 doses for the rollout in Pampanga province; Zamboanga City, with 10,200 doses for front-line workers in the Zamboanga Peninsula; Koronadal City, the capital of South Cotabato province, which got 18,000 doses for Soccsksargen region; the provinces of Occidental Mindoro, Marinduque, Romblon and Palawan in the Mimaropa region; and Tacloban City, which got 7,200 for Eastern Visayas region.

In Calabarzon (Cavite, Laguna, Batangas, Rizal and Quezon provinces), 7,180 doses were to be distributed to the 13 hospitals in the region, said Dr. Eduardo Janairo, DOH-Calabarzon director.