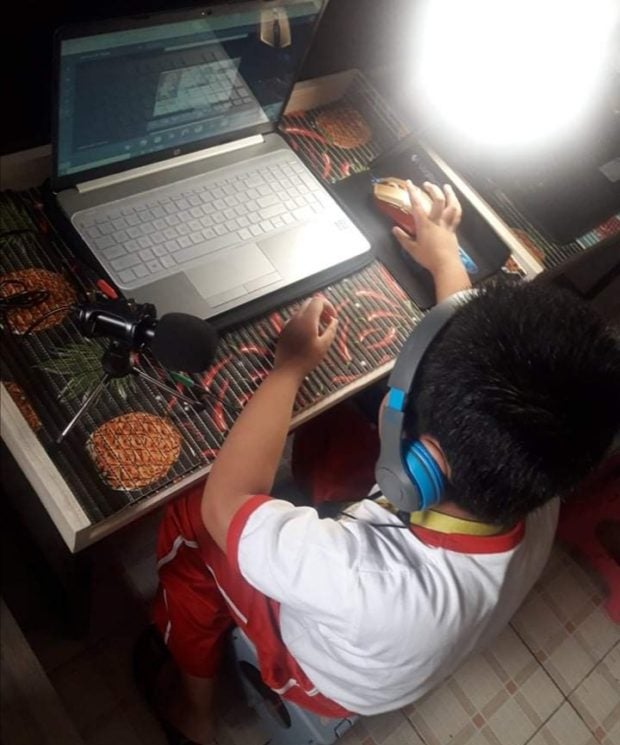 This photo shows 7-year-old Rajo Filio, a Grade 2 student in a private school in Quezon City, participating in his online class on Wednesday, August 12, 2020. Contributed photo

MANILA, Philippines — The Department of Education on Friday said it is looking into reports of so-called “academic dishonesty” while on distance learning wherein parents are supposedly paying to have the modules of their children answered.

DepEd Undersecretary Diosdado San Antonio said tolerating cheating such as this will not be beneficial to students in the long run.

(What’s clear is that from the start, we stressed that this should not be done because it won’t help in teaching young Filipinos honesty if the parents will buy or help in giving the answers.)

(We are having our colleagues look and validate these reports.)

Teachers who would be found involved in any practice involving academic dishonesty will face sanctions, he said.

It was during a recent Senate hearing when the “sagot-for-sale” scheme was bared wherein parents supposedly pay others to answer their children’s modules.

This came as DepEd reported that 99 percent of students passed on the first quarter of the school year while under distance learning.

San Antonio, however, saw nothing wrong with this findings.

(Passing means having a grade of 75 and we want that no one is left behind because the 1 percent could be hundreds of thousands.)

(I want to stress that it’s possible that teachers were even more considerate.)

Read Next
5,260 CoronaVac doses arrive in Palawan
EDITORS' PICK
In good spirits: SMDC helps farmers and residents through Kadiwa Market
Smart three-peats as country’s fastest mobile network – Ookla
Pre-order the new vivo Y20s [G] to get a free TWS earphone
DSWD chief admits ‘slow start’ in distribution of aid in ‘NCR Plus’
Would the military allow me to stay this long if I’m inutile? – Duterte
65% of Filipinos say Duterte’s health should be made public – SWS
MOST READ
Vico Sotto frets getting photos of ‘butt vaccination’ from Pasig dwellers
Metro Manila to have shortened curfew hours from 8 p.m. to 5 a.m. under MECQ
San Miguel Corp. continues to invest heavily in the Philippines’ future
COVID-hit Roque slams ‘un-Christian’ query on how fast he secured hospital bed
Don't miss out on the latest news and information.